$5 donation will provide a throw for patient or vet 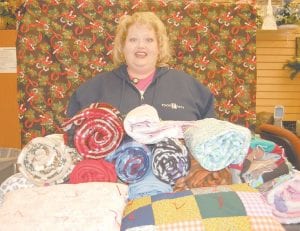 Doris Banks is collecting lap throws for nursing home residents and veterans. So far she has collected 240 throws.

Do you want to give back to others this holiday season, but aren’t sure what to do? For less than $5 you can buy a fleece throw, or lap quilt, for a nursing home patient or a veteran.

For the 15th year, Doris Banks is collecting the throws for residents at Letcher Manor Nursing Home in Whitesburg. Her father was a resident at the home the first year Banks, of Ice, and Renee Cicelske, assistant store manager at Food City in Whitesburg, decided to collect throws.

“She was sewing and started making throws,” said Banks, who works as floral manager in Food City’s Whitesburg store, where she has worked for 14 years.

Twenty-five homemade throws were donated the first year. Each year since, more blankets were collected than the previous year.

Last year, 115 throws were collected for residents at Letcher Manor. A church donated $200 and Banks purchased 69 throws, making it possible to also donate 110 throws to veterans at the Eastern Kentucky Veterans Center in Hazard.

Within the last couple of weeks, 240 throws have been donated and all 120 residents at the nursing home and 120 veterans will be given a throw from Santa Claus during Christmas parties held at the facilities during the middle of December.

“One by itself doesn’t do anything, but then when you have 120 it’s amazing,” said Banks. “A lot of people can give a $5 gift, but don’t know what to buy or where to take it. Just about everyone can purchase a throw.”

Banks isn’t stopping yet. She said if more throws are collected, she will find another facility to take the blankets.

“It’s the reason for the season,” she said. “It’s better to give than receive. It’s the right thing to do.”

Gift bags are needed for the 240 throws. Fleece throws or gift bags may be dropped off at the floral department of Food City.

Banks was honored by her Abingdon, Virginiabased employer earlier this year for her “outstanding volunteerism.” In addition to her Christmas-related efforts, Banks was honored for her 12 years of volunteer work with the American Cancer Society’s Relay for Life. In honoring her work, Food City also noted that Banks volunteers to decorate the Letcher County Central and Jenkins high schools for prom, graduation and other special events, including her donations of prom corsages and boutonnieres for students who cannot afford them and those with disabilities.