5 for 48: Johnson’s titles speak for themselves 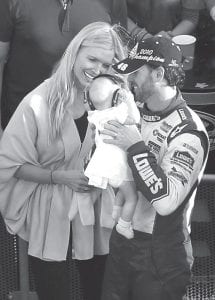 It was early Monday morning, and Jimmie Johnson was celebrating another NASCAR championship in the surf on South Beach.

His five NASCAR championship trophies had been placed delicately in the sand, and with rolled up pant legs, Johnson and crew chief Chad Knaus stepped into the water for one final photo commemorating their historic march through the record books.

Nobody in NASCAR can find the right adjective to describe Johnson’s unprecedented fiveyear run. And his performance in Sunday’s season finale, running second at Homestead-Miami Speedway to lock down his fifth consecutive title, should certainly have secured his legacy as one of the decade’s most dominant athletes.

But after so many years of being either overlooked or disliked, Johnson has stopped caring what people think of him, or his resume.

“People tell me they hate me, but they respect me, and that’s always cool,” Johnson said. “In the moment, I think it’s tough for fans to maybe look at what we have accomplished, because they want their guy to win and I understand that. But I know what we have done is respected sports-wide, not just in our little bubble we live in.

“But I don’t need it to make me feel better about what we’ve done. I’m totally content based on our performance. Five in a row, no one has ever done it.”

Nobody but Johnson and his No. 48 Hendrick Motorsports team, which continue to defy any reasonable expectations of performance, consistency and longevity.

See, Johnson has been very good from the very first day owner Rick Hendrick teamed him with Knaus and turned the duo loose in NASCAR’s premier series. In nine seasons, they’ve amassed 53 wins and contended for the championship every single year.

Johnson has never finished lower than fifth in the standings, which happened twice: During his 2002 rookie season, and in 2005, when a blown tire in the season finale dropped him from second to fifth.

That race, when he failed to catch Tony Stewart for the championship, marked Johnson’s third straight near-miss at winning NASCAR’s highest honor. The failure nearly destroyed Johnson and Knaus, but team owner Rick Hendrick instead used the disappointment as motivation for the duo to finally break through in their pursuit of a championship.

Only they didn’t stop at one.

The first four were impressive for the team’s dominance alone.

The fifth one, after the first true test of the Johnson-Knaus reign was, as Johnson said, simply unbelievable.

Denny Hamlin took Johnson all the way to edge in this year’s Chase for the Sprint Cup championship and nobody would deny that Hamlin outran him through most of the 10-race series. Kevin Harvick, who used consistency to take control of the regular season, lurked behind in third and never gave Johnson a chance to coast.

But there’s a mental toughness required in being a champion, and through all these years, Johnson feels like he’s mastered it. He tweaked Hamlin over the final few weeks with pointed barbs about nerves and pressure, all the while staying cool and calm.

It most certainly worked on Sunday, which turned into a battle of which driver made the fewest mistakes.

Hamlin was the loser of that fight, spinning early from contact with Greg Biffle that many believe was a brain-fade on Hamlin’s part. And Harvick was caught speeding on pit road moments before a flawless pit stop pushed him into the lead, and the penalty took him out of race-winning contention.

That was Harvick’s only true shot to win the title, and he settled for third in the race and third in the standings.

Johnson, who overcame several shaky pit stops from his crew, remained smooth and steady and became the first driver in the seven-year history of the Chase to come from behind in the season finale to win the title. He’s also just the third driver since 1975 who trailed in the standings at the start of the final race to rally and win the championship.

“I’d go out and say right now I couldn’t do what he’s done, and people claim me to the best thing since whatever,” said Kyle Busch, winner of 86 races spanning six seasons in NASCAR’s top three series. “I can’t do what Jimmie’s done.”

“It’s spectacular,” Edwards said. “I think we are all witnessing something that is nothing short of spectacular.”

And Johnson knows that, too.

He doesn’t care about popularity among mainstream sports fans, and he shrugs off suggestions that race car drivers aren’t true athletes.

With five championship trophies sitting in front of him in the sand, he doesn’t need confirmation that he ranks among the greatest of all-time.

And he won’t say where he believes he ranks, either.

“I don’t know if I can answer a question like that. I can’t,” he said. “The driver or a person should not be up there saying, ‘I’m great.’ That’s just not my deal. At least me. I’m not going to do it.

“But I’m very proud of what we’ve done.”

As he should be.