5 overlooked albums that should be heard 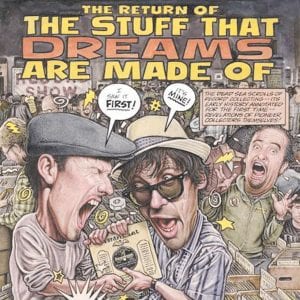 Yazoo Records’ “The Return of the Stuff That Dreams Are Made Of” is a two-disc set that travels back to the 1920s and unearths some of the earliest recordings of homegrown American music.

While everyone was buzzing about big album releases from Frank Ocean, Fiona Apple, Mumford & Sons and Taylor Swift, you might have missed some mustlistens. Here’s what you should know about, and why:

But did it earn any Grammy nominations? No. Is it selling well? No. Have you heard it? Probably not.

And that needs to change.

“Shields” is a semimasterpiece that feels both old and new — and in the best ways possible. Anchored by the voices of Edward Droste and Daniel Rossen, this Brooklyn, N.Y.-based foursome has created a disc that is genre-defying and consistent throughout.

The 10 tracks that make up “Shields” are drum-filled and smoky, and half the songs are more than five minutes long. That’s a bit unusual, but it’s also a break from mainstream pop music, and a needed one.

At left is an image of the cover of Grizzly Bear’s album “Shields,” while Ty Segall’s “Twins” album cover is seen at right. Both are must-hear releases overlooked on most “best of” lists. (AP photos)

McKuen’s a crooner often dismissed as schlocky, but Freeman finds the earnest heart — and crushing heartbreak — in gentle ballads like “A Man Alone,” which could be the record’s theme song. The production on “Jean” and the title track are by turns lush and spare. Every track is suffused with a melancholy that draws comparisons to some of the best of Ween’s softer material, including the aching “Birthday Boy” and “I Don’t Want It.”

Ween devotees felt betrayed when Freeman broke up the band, and they were confused that such an accomplished songwriter opted to record someone else’s tunes. But “Marvelous Clouds” rewards multiple listens, and provides plenty of hints that Freeman will continue to surprise.

Various Artists, “The Return of the Stuff That Dreams Are Made Of” (Yazoo Records) — Too often we reflexively think that music is born when it is recorded, that it simply comes into existence fully formed. But every riff, every melody, every harmony has its own rich history. When it comes to the American songbook, taking rides through the deeper parts of that history can be as thrilling and immediate as seeing a live concert.

This is the wonderful calculus of “The Return of the Stuff That Dreams Are Made Of,” a two-disc set with great documentation that travels back to the 1920s and unearths some of the earliest recordings of homegrown American music. Here’s the Fruit Jar Guzzlers (best band name ever?) doing a prehistoric version of the “Stack- O-Lee” ballad. Here’s blues legend Charley Patton going deep into the Delta. Here’s a fiddler named Elder Golden P. Harris sounding like something coming through the open windows of a 19th-century Southern church as he twangs out “I’ll Lead a Christian Life.”

Other traditions are represented, too: Two Eastern European tracks are welcome additions to the mix, jarring in the most evocative way amid all the country and blues. A great American musical lesson that puts the best of emerging legends alongside the long-forgotten — just as record collectors might dream of.

Ty Segall, “Twins” (Drag City) — Ty Segall may have been the busiest man in music this year, releasing three albums under different band alignments while producing and contributing to several more.

His solo record, “Twins,” is the best of the lot and shows why everyone is so excited about the 25-year-old garage rocker from San Francisco. He plays most of the instruments here on 12 tracks full of fuzzy goodness.

Segall sets the mood with album opener, “ Thank God for Sinners,” an anthemic fist to the face that shows you right where his heart is. Other highlights include the shambolic “Ghost,” the relentless “They Told Me Too” and “Love Fuzz,” which has a selfexplanatory title.

We missed Segall’s run through Nashville, Tenn., earlier this year. That won’t happen again. He has our complete attention.

THEESatisfaction, “awE naturalE” (Sub Pop) — For some reason, year-end lists often carry a taint with them, but around here, we love them because of all the leads they give you on new music. THEESatisfaction came to our attention after its appearance on one list or another, and we’re excited to discover “awE naturalE.”

Rapper Stasia Irons and singer Catherine Harris-White’s thoroughly modern mash-up of hiphop and soul is intoxicating — they call their songs “funk-psychedelic feminista sci-fi epics” — and the music weaves back and forth between fierce and fearless.

The folks at Sub Pop, who had a stellar 2012, discovered Irons and Harris-White after hearing a Shabazz Palaces song they contributed to. Already a veteran of several mixtapes, the self-produced “awE naturalE” is ridiculously self-assured and constantly interesting.

Looking for a little ear candy? Check out “QueenS,” which serves as something of a theme song, the jazzy “Existinct” and the fractured jam of “naturalE.”