RIVER SWEEPERS — Volunteers who took part in Letcher County’s first River Sweep posed for a photograph after they worked to clean banks on the North Fork of the Kentucky RIver. (Photos by Gary Elder)

A portion of the riverbank of the North Fork of the Kentucky River in Letcher County is cleaner today thanks to about 50 people who spent much of last Saturday helping to remove debris from the area.

The volunteers were taking part in River Sweep, an annual riverbank cleanup for the Ohio River and its tributaries sponsored by the Ohio River Valley Water Sanitation Commission (ORSANCO). The Letcher County portion, which had to be delayed two times because of bad weather, was sponsored locally by Childers Oil.

Also, volunteers pulled out a Ford Explorer that had been in the river for more than two years. It was so heavy from being full of sediment, that it broke a chain twice before volunteers were finally able to get it out. 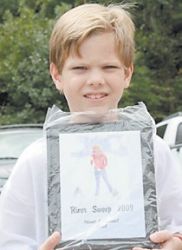 Prince Miranda, a student at Arlie Boggs Elementary School at Eolia, won the award for finding the most unusual item during the cleanup — a vacum cleaner.

Retired social worker Lee Anna Mullins of Whitesburg, who chairs the Mountain Heritage Festival Committee, said she was happy to help with the cleanup of the headwaters of the North Fork.

“Our rivers and streams are beautiful in this area and they really need to be cleaned up and taken care of,” Mullins said.

Matthews said it was an “awesome” day and that she got great response from volunteers, including a woman who shared her email address.

“She said from now on when you do something like this, let me know and we would love to volunteer,” said Matthews.

That woman may be hearing from Matthews later this fall when Childers Oil plans on helping clean up an illegal dump in Millstone. 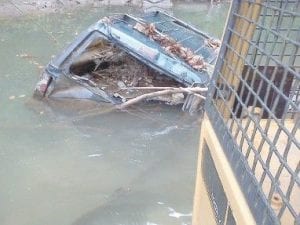 Volunteers used a piece of heavy equipment to remove this Ford Explorer from the North Fork of the Kentucky River.

This year was Childers Oil’s first in sponsoring River Sweep. Matthews said the company plans on participating again next year.