50 things that changed our lives in past decade 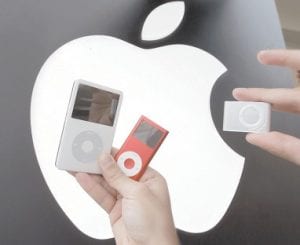 This 2006 file photo shows the then new Apple iPod Shuffle, right, next to a Red iPod Nano, center, and 60GB iPod, left, at an Apple store in Palo Alto, Calif. (AP Photo)

Was it only a decade ago that a blackberry was a mere summer fruit? That green was, well, a color, and reality TV was that one show sandwiched between music videos on MTV?

There were, of course, huge political and social upheavals that roiled our world in the past decade. But there were also the gradual lifestyle changes that you don’t always notice when they’re happening — kind of like watching a child grow older. Here’s an alphabetical look at 50 things that changed our lives since the beginning of the millennium:

ALTERNATIVE MEDICINE:
From acupuncture to herbal supplements to alternative ways of treating cancer, alternative medicine became more mainstream than ever.

APPS:
There’s an app for that! The phrase comes from Apple iPhone advertising, but could apply to the entire decade’s gadget explosion, from laptops to GPS systems (want your car to give you directions to Mom’s house in Chinese, or by a Frenchwoman named Virginie? There was an app for that.)

AGING:
Nobody seemed to look their age anymore: Clothes for 50-year-old women started looking more like clothes for 18- year-olds, tweens looked more like teens, long hair was popular for all ages, and in many ways women’s fashion seemed to morph into one single age group.

BLOG:
I blog, you blog, he blogs … How did we spend our time before blogging? There are more than 100 million of these Web logs out there in cyberspace.

BLACKBERRIES:
Considered essential by corporate CEOs and moms planning playdates. Introduced in 2002, the smartphone version is now used by more than 28 million people, according to its maker, Research In Motion Ltd.

BOOK CLUBS:
Thanks in part to Oprah Winfrey, the decade saw not only a profusion in book discussion clubs but a growing reliance on them by publishers.

CAMERAS:
Remember those trips to get film developed? Nope? Even your grandmother has a digital camera, and she’s probably emailing you photos right now or uploading them to a photo-sharing site.

CELEBRITY CULTURE:
Celebrity magazines fed a growing obsession with celebrities and the everyday minutiae of their lives. By decade’s end, we were still obsessed, though Britney Spears and Angelina Jolie had ceded many covers to reality stars like Jon and Kate Gosselin. Celebrity Web sites like TMZ took hold mid-decade.

CELL PHONES:
Cell phones are now used by more than 85 percent of the U.S. population and for some have replaced land lines entirely. On the downside, they’ve made cheating on a spouse more difficult — just ask Tiger Woods.

CHEFS:
Chefs are hot! The Food Network, whose viewership tripled this decade, reeled in viewers with high-voltage personalities like Rachael Ray and Bobby Flay, Emeril Lagasse and Giada De Laurentis. Meryl Streep starred in a cinematic pean to the late Julia Child.

CONNECTIVITY:
As in, we’re all expected to be connected, wirelessly, all the time. Boss emails you on a Sunday? Better answer, unless you’re off in Antarctica — you have no excuse.

CROCS:
Those ubiquitous plastic clogs debuted in 2002 and became the shoes you loved to hate. Kids love ‘em, but there are Web groups dedicated to their destruction. Not to be deterred: First lady Michelle Obama, who wore them on vacation in 2009.

DANCING:
Dancing never went out of style, but this decade saw the huge popularity of dancing contests like “So You Think You Can Dance” and “Dancing With the Stars.”

DATING:
Dating was transformed like everything else by Internet sites, rendering other ways of meeting people obsolete. And it wasn’t just the territory of the relatively young: Seniors found love online, too.

DVRs:
Suddenly, DVR-ing is a verb, and what it means is this: There’s no reason to know anymore what channel your program is on, and what time.

Embarrassment has always been part of comedy — you need only think of Don Rickles — but this is the decade of cringeworthy Larry David in “Curb Your Enthusiasm,” Ricky Gervais, and of course Sacha Baron Cohen, who as Borat and Bruno shamed perhaps the entire country.

FACEBOOK:
Can you believe this social networking site was once limited only to Harvard students? Now it’s a time-sucking obsession for more than 300 million users globally and a whole new form of social etiquette: Who to friend on Facebook?

FAT:
This was the decade that fat became the enemy of the state. New York City banned trans fats, and Alabama — second in national obesity rankings — introduced a tax on overweight state workers.

FOODIE:
It’s not just that guy in the White House who liked arugula — this was the decade of the foodie, when we all developed gourmet palates. Even a burger became a gourmet item — as in Daniel Boulud’s truffle burger, stuffed with foie gras and short ribs.G

OING GREEN:
From the kind of light bulbs we use to the kind of shopping bags we carry to the cars we drive, “going green” took hold this decade. Now, it’s not strange to hear a schoolkid tell a parent to use a cloth grocery bag.

GOOGLE:
This was the decade that Google became a part of our brain function. You know that guy who was in that movie — when was it? Just Google it.

GPS:
We can’t get lost anymore — or at least it’s pretty hard, with the ubiquitous GPS systems. But you’d better type in your location carefully: One couple made a 400- mile mistake this year by typing “Carpi” rather than “Capri.”

HELICOPTER PARENTING:
Translation: helicopters hover, and so do many parents. After years of obsessive attention to safety and achievement of the youngest children, some said a backlash was under way.

INFORMATION OVERLOAD:
An explosion in Internet use led to an overload of information about practically everything. It’s at our fingertips, but is it accurate? Some call it part of a larger phenomenon, namely …

INSTANT GRATIFICATION:
Otherwise known as being able to get anything you want within an instant. Often referred to as a theme of the decade.

IPODS:
An icon of the digital age, it’s hard to believe this portable media player was first launched in 2001. Six years later the 100 millionth iPod was sold.

LIFE COACHES:
In the aughts, there’s a coach for everything! So why not life itself? Some say life coaches are merely therapists without the license or regulations.

MUSICALS:
They’ve been around forever, but this decade musicals came back to film, starting with “Moulin Rouge” and “Chicago.” But for kids, it was Disney’s extremely successful “High School Musical” franchise — three movies and counting — that brought back the musical magic.

NETFLIX:
The DVD by mail service, established in 1997, announced its two-billionth DVD delivery this year. For many, those discs on top of the TV are just one more thing to procrastinate over.

PREGNANCY CHIC:
If you’ve got it, flaunt it: That was the new ethos of the pregnancy experience, with chic clothes that emphasized the bulging belly, personal pregnancy photos, and endless coverage of celebrity pregnancies.

REALITY TV:
As a nation, we became addicted to reality TV, from the feuding Gosselins of “Jon & Kate Plus 8” to “American Idol” to “Project Runway.” At decade’s end, the Heenes of Balloon Boy fame and the Salahis of gatecrashing fame give reality TV some unwanted attention.

RECESSION CHIC:
Fashion skewed to more severe styles — and much black — as so-called “recession chic” took hold in the latter part of the decade.

RETRO CHIC:
Once you forget the smoking, the racism, the sexism and the homophobia, the early ’60s depicted by the AMC series “Mad Men” sure looked good. The swinging Madison Avenue ad men make neckties cool again.

SEXTING:
Combine texting with a cell phone’s camera function and you get this parental nightmare. A survey from Pew Research Center’s Internet & American Life Project found that 15 percent of teens ages 12-17 with a cell phone had received sexually suggestive images or videos.

STARBUCKS:
It’s a cliche that there’s one on every block, but sometimes it seemed like it — and millions now consider it normal to spend $4 or so on a coffee drink in the morning, perhaps a venti halfcaf half-decaf vanilla latte with an extra shot.

TATTOOS:
It started innocently enough — maybe a butterfly on the shoulder or a tribal symbol on the bicep. A few characters from the Chinese alphabet later it seemed any hipster who really meant it had a full sleeve of tattoos. The trend extended to middleaged moms and even tween idol Miley Cyrus.

TEXTING:
R u still rding this sty? Hope u r. This is the decade we start communicating in the shorthand of text messages. Get used to it: E-mail is so ’00s.

TV SCREENS:
Television screens became bigger and flatter, making some ordinary living rooms and dens the equivalent of big-studio screening rooms. At the same time, though, people were watching movies and videos on the tiniest screens imaginable — on their iPods other mobile devices.

TWEEN CULTURE:
Tweens, especially girls, became an economic force to be reckoned with, buying everything from clothes to electronic devices to music to concert tickets.

TWITTER:
The new social network introduced tweets, retweets, follows and trending topics — as long as it fit in 140 characters.

UGGS:
Not since the Croc (see above) has functional footwear created such a frenzy. The furlined snowboots were everywhere, no matter the climate. Los Angelenos insisted on wearing them with shorts.

WII:
In a sea of ever-more-sophisticated video games, this simple console became the decade’s breakout hit by appealing to the non-gaming masses. Wiis became a center of family gaming, home fitness and even senior socializing.

WIKIPEDIA:
A boon to lazy students everywhere, the opensource encyclopedia used the masses to police its entries and keep them (mostly) (sometimes) accurate.

YOGA:
Madonna, Gwyneth and other bendy celebrities brought the eastern practice mainstream. By the end of the decade, even Grandma could do downward-facing dogs on her Wii Fit.

YOUTUBE:
Let’s end this list and go kill some time by watching … YouTube videos! The videosharing site was born in 2005. Political candidates in 2008 even had their on YouTube channels. The most popular video yet: “Charlie Bit My Finger,” in which baby Charlie bites the finger of his brother Harry.