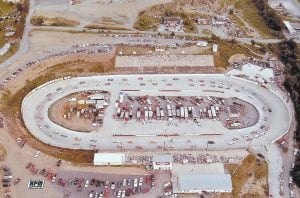 Kingsport Speedway opened in 1965 as a high-banked dirt track, but was covered in asphalt in the spring of 1969. In 1984, the asphalt was peeled away and dirt racing returned. The surface is now concrete.

Kingsport Speedway may be known as “The Concrete Jungle” today, but that concrete surface that it is now known for has not always been the case.

In 1965, the speedway opened as a high-banked dirt track. After four years of slinging dirt, the speedway was covered in asphalt in the spring of 1969. In 1984, the asphalt was peeled away and dirt racing returned.

Surface changes at Kingsport had become the norm over its first 30 years, and in 1996 the surface changed yet again. But this time it wasn’t back to asphalt and it wasn’t more dirt — it was concrete.

Speedway owner Joe Loven was the mastermind behind turning Kingsport into a concrete facility. Loven, who had spent over 35 years in the concrete business, had also poured concrete at nearby Bristol Motor Speedway (Tennessee) in the past. Loven took what he had learned in the concrete business and his work at Bristol, and applied it to his 0.375-mile track in Kingsport.

“I was in the concrete business and I just took all I learned, brought it together, and put it into the speedway,” said Loven. “It’s the best [concrete] I could make.” 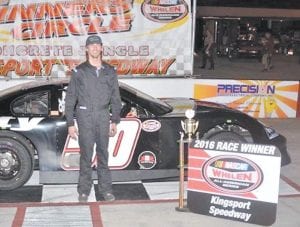 Zeke Shell captured his first win of the 2016 season at Kingsport Speedway on April 29. Shell will try to get another trophy when he competes in the 60-lap late model feature race this Friday night (May 13).

What Loven created was a semi-banked concrete oval that didn’t wear tires and also provided a large amount of grip. Loven also found that his new concrete surface was basically a one lane track that required drivers to get up on the wheel and use the bump-and-run technique quite often.

Chad Finchum, the 2013 track champion, knows all about those challenges of a concrete surface like Kingsport’s.

“A concrete surface is probably the most unique and it is also rare,” remarked Finchum. “I’ve ran dirt and I’ve ran asphalt, but there’s nothing like concrete. Concrete tracks take you beyond any limits that you thought of, and that’s because they hold so much grip.”

Last month, Finchum competed in the NASCAR K&N Pro Series East race at Bristol Motor Speedway – a race he dominated and won. Finchum has no doubt that his experience at Kingsport helped set the pace for his success at Bristol.

“Coming from Kingsport to Bristol, I knew that I could run a little bit harder with the concrete surface. I was able to translate what I had learned from racing at Kingsport to the race at Bristol.”

Finchum has also competed at Dover International Speedway (Delaware) – another concrete speedway – in the K&N Series, but says that Kingsport is one-of-a-kind.

“Kingsport is much more different,” added Finchum. “There isn’t another track like it. You have to drive it so hard every lap but if you overstep one bit, you’re done; it’s not forgiving.”

Among Finchum’s success at other speedways, the Northeast Tennessee oval still remains special.

“Kingsport was the first concrete track I had ever been on. It was my first NASCAR local track I had been to in the weekly series. That track is very special to me and my family.

Long before Karen Tunnell was the general manager and promoter of the facility, she experienced many races as a fan and even a crew member. Tunnell says that the concrete has always provided exciting racing.

“I attended the very first race on the concrete here,” said Tunnell. “The place has always provided great racing because of the tight configuration that requires the aggressive driving.”

“Every racetrack has some trait that makes it unique, and Kingsport’s is definitely the concrete.”

The concrete surface has certainly set Kingsport apart from the typical weekly dirt or asphalt short tracks. In fact, out of the current 59 racetracks across the United States and Canada, Kingsport is the only one to feature a fully concrete surface.

Kingsport Speedway is located 90 minutes (77 miles) from Whitesburg at 2961 N. John B. Dennis Highway in Kingsport. Getting to the track is easy. After crossing the Kentucky- Virginia state line at Pound Gap, remain on U.S. 23 for 59.48 miles; then turn left onto Hilton Road (Highway 58E just past Gate City, where you will see a Food City and Wendy’s nearby). After a very short distance of 0.27 miles, keep driving straight onto VA-224/ VA 701/Wadlow Gap Road for 0.23 miles. Continue following the Wadlow Gap Highway/VA-224. After another 2.5 miles, Wadlow Gap Highway becomes Tennessee Highway 93. After driving another 2.05 miles you will make a U-turn onto N. John B. Dennis Highway. If you reach Armstrong Drive you have gone too far.

Writer Chase Brashears is native of Letcher County, where he grew up on Smoot Creek and attended Letcher County Central High School.