‘We are seeing a lot of young people that are sick, and we did not see that … in 1st wave’ 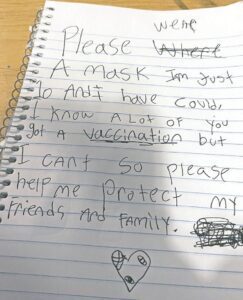 10-YEAR-OLD Lilee Caudill of Letcher County wrote this appeal to adults and students who are old enough to take the vaccination against COVID-19.

COVID-19 vaccination rates are rising again in Letcher County as the virus’s Delta variant drives a sharp increase in hospitalizations among the unvaccinated, and more people are seeking immunizations.

Two more people have been added to the death toll here, making the official number of dead 51. That number is expected to go up within days as the number of people reported to have died of COVID by doctors, family members and funeral homes continued to rise before Tuesday’s official report.

Hospitals are nearly full here and across Kentucky and other southern states. Three weeks ago, there were 74 COVID patients in the entire Ap- palachian Regional Healthcare system, said Dr. Fares Kahter, infectious disease specialist at Mountain Comprehensive Health Corp. and ARH. By this morning the number had more than doubled to 155 with 32 in ICUs and 18 on ventilators.

“We are extremely busy in the hospital and the clinic. There are a lot of COVID patients, a lot of sick people — a lot sicker than we were seeing in December and January,” Kahter said. “We’re seeing a lot of young people that are sick, and we did not see that at all in the first wave.”

According to the latest state statistics, Letcher County has had 2,552 confirmed cases of COVID since the beginning of the pandemic, or nearly 12 percent of the population. That number is up from 2,418 seven days earlier. Nationwide, COVID-19 is now the third leading cause of death.

Kahter urged everyone who has not been vaccinated to get vaccinated. Though there have been some breakthrough infections of vaccinated people, he said the number is small and the illness is mild among those who have had the shots. He said 95 to 97 percent of all patients in the ARH hospitals are unvaccinated.

“People should not be labeling the vaccine as bad or ineffective just because there are breakthrough infections,” he said, adding that the vaccines are very safe and have passed rigorous testing in order to get Emergency Use Authorizations from the U.S. Food and Drug Administration.

For those who were hesitant because the vaccines had not been fully approved, one roadblock has been removed. The FDA gave full approval to the Pfizer/BioNTech vaccine on Monday. There has so far been no word on the Moderna vaccine, however Kahter said there is little difference between the requirements for an Emergency Use Authorization and an FDA approval.

He said Moderna has in the past followed soon after the Pfizer vaccine, and he expects that will be the case again.

Meanwhile, MCHC will be opening a drive-thru vaccination site at the old Whitesburg High School on Monday, August 30.

All three vaccines — Moderna, Pfizer and Johnson & Johnson – will be available, as well as booster shots for the immunocompromised.

Shots will be given in the covered concourse area on School Hill.

Among the 18-65 group, 50 percent are now fully vaccinated, up 0.6 percent from a week before, and 55.9 percent now have at least one shot, up one full percentage point.

People who are immunocompromised because of solid organ transplant, chemotherapy and autoimmune diseases are already receiving booster shots, and Kahter said he expects the shots to be available to others who had either the Pfizer or Moderna vaccine before the end of September. The CDC is recommending boosters to be given eight months after the second vaccine shot.

Because of the need for hospital beds and the need for more vaccinations, several governors, including Kentucky Gov. Andy Beshear, have mobilized the National Guard to assist with the pandemic. It was not clear whether the Guard will be used in this area, however Kahter said Guard members have been deployed in Johnson City, Tenn., to help with hospital overflow. He said he knows of at least three pediatric patients who are on ventilators at the children’s hospital there.