55-year-old decoration back on display 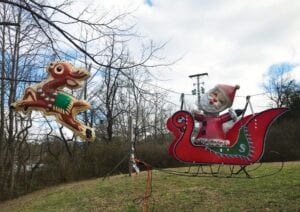 If this “Santa Claus and Reindeer” decoration looks familiar, you may have seen it outside the old Royal Crown Cola bottling plant at Ermine sometime between the time it was first displayed in 1965 and its last showing there in December 2010. Or you may have seen it in a much more fragile form when it was displayed outside Jenkins City Hall for one season, in December 2011, the month after Bradley and Ron Bentley closed the RC Plant for good and donated the decoration to the City of Jenkins, then under the direction of Mayor G.C. Kincer. When Bradley Bentley, who died in 2015 at age 99, brought the decoration back from a business trip to Chicago in 1965, it had five reindeer, led by Rudolph, whose red nose would light up. Rudolph was later stolen while on on loan to the Paintsville RC plant, also owned by the Bentleys. About three years ago, Whitesburg Mayor James Wiley Craft negotiated the transfer of ownership of the decoration to the City of Whitesburg so that it could be refurbished and returned to public display. “They did,” said Craft, “and we’ve been working to rehab it and get it in shape to put back out. I’m proud of all the people who helped get it back to some of its original glory.” The display, which for now is able to use only one of the four remaining reindeer, can now be seen at the west end of the Whitesburg Bypass.