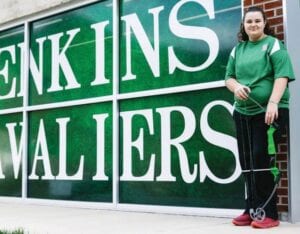 Kimber Collins poses with her bow outside Jenkins Elementary School. She is the new natonal elementary archery champion.

Letcher County has a national champion archer, and she’s a student in the Jenkins Independent School District.

Kimber Collins, a fifth grader at Jenkins Elementary School, is National Elementary Champion in the National Archery in the Schools Program. She completed the Virtual National Tournament, which ended Sunday, with a score of 284 out of 300.

Kimber is a daughter of J.R. and Angie Collins of Premium. She will be a sixth grader at Jenkins next school year.

According to its web site, NASP is an in-school program aimed at improving educational performance among students in grades four through 12 by helping them learn focus, self-control, discipline, patience, and “the life lessons required to be successful in the classroom and in life.” It is a team sport open to all students, regardless of athletic ability.