He might have the size of a center but 6-11, 230-pound Kyle Filipowski has the skills that immediately impressed Kentucky coach John Calipari when he saw him play.

“Kyle doesn’t play center. He is a forward,” said Mannix. “If my boy is a center, he is the best ball-handing center basketball has ever seen. He is 6-11 but we put him in ball screens where he is the ball handler. He’s as versatile as he can be.”

That includes being able to knock down 3-point shots.

He’s currently a top 50 player — he was not even ranked among the top 125 on Jan. 1 — in the 2022 recruiting class who is likely to move up after his summer play. He made official visits to Duke, Indiana, Iowa, Ohio State, and Syracuse last month as well as unofficial visits to Northwestern and Connecticut. 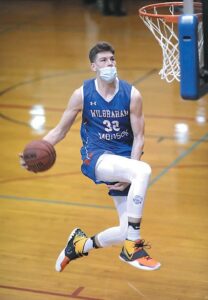 He might be 6-11 but forward Kyle Filipowski can hit 3-pointers and handle the ball so well that he is a matchup nightmare for opponents. (Wilbraham & Monson Academy Photo)

Filipowski averaged 21 points, 13.2 rebounds, and 5.2 assists per game in an abbreviated junior season for Wilbraham & Monson and was named Massachusetts Gatorade Player of the Year. As a sophomore he had 30 points and went 15-for-15 at the foul line in the New England Championship game and was named tourney MVP.

The four-star forward has been seen as a Duke lean by many recruiting analysts but Mannix had explained to him that Calipari often did not offer players as early as some schools and that a UK offer could be coming. Mannix knows Calipari and one of his former players, Wenyen Gabriel, played for Kentucky and is now in the NBA.

“I still think there is time for Kentucky and that Kentucky got in with the offer at a good time,” the veteran coach said. “Kyle took five official visits in June and had a busy schedule. Those junior visits are impactful, maybe more so than a lot of people think. Maybe now it’s also because kids were locked down so long and can’t wait to get back out there. Now Kentucky sees him and offers. 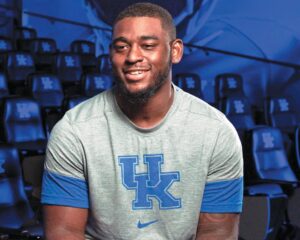 “He can still take five more official visits (one is already scheduled to UCLA) as a senior and a Zoom call just cannot do Kentucky justice like an official visit can.”

While Calipari had not seen Filipowski play until this month, his staff had. New assistant coach Orlando Antigua came to a game in 2019 with Illinois head coach Brad Underwood just a few months before the pandemic hit.

“They were looking at our guys and guys on the other team, but they liked him a lot,” Mannix said.

Current UK assistant coach Bruiser Flint was still at Indiana when Mannix reached out to him about Filipowski, who turns 18 in November.

“He watched all our playoff games and Bruiser said he could absolutely play at Indiana or a lot of places,” Mannix said. “So, Orlando and Bruiser have known about him but mainly from when he was a sophomore. I don’t think he’s going to make a college choice until after our season starts but he has a lot to think about the next few months.”

Filipowski asked Calipari directly what kind of role the coach envisioned for him at Kentucky and got the answer he wanted — a stretch forward who can play on the perimeter with a more traditional big man inside.

“That was important for Kyle,” Mannix said. “What I love about Kyle, and it hit home with Cal, is that Kyle is a winner. He will do whatever it takes to win. He makes plays from the perimeter but will also post up. We might set up a play out of a timeout with him having his back to the basket and he’s not averse to that.

“He will post up with no problem and is a nightmare of a matchup for most teams. He will drive by a center on the perimeter, and he can post up a smaller player. He’s that versatile and he handles the ball so well. There’s nothing ordinary about him and Cal talked about the matchup problems he could present.”

Mannix thinks Filipowski will continue to improve in college, too, as he adds muscle.

“He’s about 230-ish now. Looks good. You don’t look at him and say he’s slight,” the coach said. “You are looking at a kid in two years who has probably put on 20 pounds and can put on another 10 pounds of muscle his freshman year in college. When he does that with the versatility he has, he’s just going to become even more of a matchup problem for teams.”

Calipari and his staff had planned to watch Filipowski, who has over 30 scholarship offers, play again at Peach Jam in Georgia last week but he tested positive for COVID and did not get to play. s

Mark Stoops is the second longest-tenured coach in the SEC behind Nick Saban of Alabama and UK senior defensive lineman Josh Paschal says that makes a big difference.

“It just builds a lot of consistency throughout the program, just knowing that your coach has been there since we’ve been here,” Paschal said at the SEC Media Days. “This is my fifth year coming up, and he’s been here for each and every year. He’s been the main guy and the alpha in the facility.

“To keep that leadership on that team and to know that you’re fighting for the same guy that you’ve been fighting for for five years, that gives you a lot of confidence, and it gives the team confidence knowing that we have a coach that’s standing by our side for Kentucky.” s

It is no surprise that Kentucky’s Chris Rodriguez is on the Doak Walker Watch List used to pick the nation’s top running back each season. The 225-pound Rodriguez ran for 785 yards and 11 touchdowns in nine games last year and had four 100-yard rushing games — all against SEC only competition.

He went 105 straight carries without being tackled for a loss and gained yards on 116 of his 119 rushing attempts while leading the SEC in yards per attempt at 6.6 and led the SEC in rushing yards per game at 87.2.

Rodriguez is also on the Maxwell Award Watch List for the nation’s most outstanding player after deciding not to put his name into the NFL draft to return to UK. Now he’s just ready for the season opener Sept. 4 to get here.

“I really just wish it was closer to the season,” he said. “It is not easy going against our defense in practice. Those dudes know what we are doing and where it is coming from. I am just ready for Sept. 4. You guys (UK fans) better be there and better watch.”

Former UK all-SEC running back Anthony White believes Rodriguez is sincere when he praises UK’s other running backs and touts what they can do this year even if that might mean fewer attempts for him.

“I have been in locker rooms where the leader feels he needs the ball, but the best situations are when the leader is the biggest cheerleader when he is not on the field because he’s comfortable knowing he is the leader. But there are times when the star guy worries others are nipping at his heels and he has to maintain his superiority and play all the time,” White said.

“I think Chris will be that cheerleader type. He knows the game is still going to hinge on his production and that he will be back out there if he comes out for a rest. He understands he can’t play every play and the better those other guys do, the better the team will be and probably the easier his job will be.”

Rodriguez also likely has a little extra motivation for the season after he was named only to the preseason all-SEC third team despite the impressive 2020 season he had. s

Kenneth Horsey and Luke Fortner for helping him tremendously in his transition to college football.

“I think Horsey just being kind of like me in that he critiques people in his head and is more of a quieter guy. He will just come up to me on the side and tell me something,” Burton said.

“Luke is more like the leader of the room. He will just tell you straight up in front of everyone.

“Darian Kinnard has helped a good amount. It’s just a little different where he is a tackle. It is harder for him because we play different positions and do different stuff. Then obviously coach (Eric) Wolford for sure. So, I have had a lot of help to get me ready.”

Kentucky softball picked up a valuable addition in the transfer portal when former Scott County all-state pitcher Kennedy Sullivan transferred from Western Kentucky to UK where she will have two years of eligibility.

Sullivan was 9-0 last season with a 2.40 ERA in 70 innings but also hit .358 with 14 home runs and 49 RBI’s. She was the 2021 Conference USA Tournament most valuable player and helped Western get into the NCAA Tournament for the first time since 2013.

Sullivan was the Class 3A player of the year in 2018 at Scott when she was fourth in the state with 14 home runs and 11th with 52 RBI’s. On the mound she was dominant with a 0.24 earned run average in 116 innings with 19-2 record when she allowed just four earned runs. All that kept her from being the state’s best pitcher was current Alabama star Montana Fouts, who had a 0.09 ERA in 232 innings at East Carter. She had a 0.76 ERA as a junior and 0.92 as a sophomore. Sullivan had 747 strikeouts those three seasons.

Sullivan grew up a UK fan but was never offered a Kentucky scholarship by coach Rachel Lawson even though Sullivan went to Lawson’s camp to “try to get noticed” by the UK staff.

“At that point recruiting was a lot different. I remember some people having committed when they were in eighth grade and 13 years old,” Sullivan said. “I think it was just kind of a panic for me. I think I committed when I was 15 or 16.

“I almost went into panic mode, and I felt like I needed to take the first offer I got because if not I didn’t know what I would be left with (if I did not). Western was my first offer and it was a good one and I just decided to take it.”

Yet when she decided to leave Western Kentucky, it did not take long for her to commit to Kentucky even though she had considerable interest from numerous college coaches.

“At Western I wasn’t into it as much. I felt myself not enjoying softball and I had played softball my whole life and knew that wasn’t going to work and felt like I needed to make a change because I love softball,” she said.

“I got into the transfer portal and started talking to some coaches and then coach Lawson got in the picture. Kentucky has always been my dream school since I was like 10 years old, and I always wanted to come here. Once I started getting to talk to her and came on my visit, it was pretty much in my mind this is where I was going to end up.” s

Quote of the Week: “I wondered if people watched last year. The league, there was quite a few people that struggled, if anybody took notice of that. So that’s how I feel,” Kentucky coach Mark Stoops on adding another SEC game each year.

Quote of the Week 2: “We hated losing him. I think he’s a potential first-round draft pick,” LSU coach Ed Oregon on offensive tackle Dare Rosenthal who transferred to Kentucky.