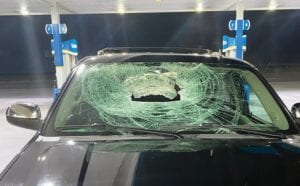 Larry Everidge, a funeral director and member of the Whitesburg City Council, was returning to Letcher County early on the morning of Nov. 27 when someone threw a water meter cover from an overpass under which Everidge was traveling on U.S. Highway 23 in Kingsport, Tenn. The cover, which had the number 2 painted on it, crashed through the windshield of Everidge’s Chevy Tahoe (above) and landed in the vehicle’s backseat (left), just missing Everidge’s head. He was traveling alone from a trip to Knoxville, Tenn.. when the incident occurred near the Tenn.-Va. state line.

Whitesburg City Councilman and funeral director Larry Everidge nearly ended up on his own embalming table after someone threw a 40-pound manhole cover through the windshield of his SUV as he was driving on U.S. 23.

“Six inches over, and I’d be dead,” Everidge said this week. “God wasn’t done with me.”

Everidge had been to Knoxville for Thanksgiving and was returning home to Letcher County before dawn on Friday. As he neared the Weber City exit on U.S. 23/Interstate 26 in Kingsport. he heard “an awful noise” and his windshield disintegrated. Everidge, a Vietnam veteran, said his first instinct was to keep driving and get out of the danger zone. He ended up at a Valero gas station in Weber City, Va., about a mile from where the incident occurred, where he stopped and called police.

“Finally, the (Scott) County law said get you some glasses on so you

don’t get glass in your eyes and drive right down there, and they’ll have to investigate it,” Everidge said.

He said police asked him why he drove into Virginia before he stopped.

“I wasn’t going to sit there and let them throw another one at me,” he said.

Everidge said he was thankful to be alive, and that no one else was in the vehicle with him.

“We had a 9-month-old baby riding with us in Knoxville, and it landed right where she was sitting,” he said.

Pictures of the vehicle, which is now at a repair shop in Weber City, show the steel cover, approximately two feet in diameter with a large numeral 2 painted on it, lying among shards of glass in the center of the back seat. 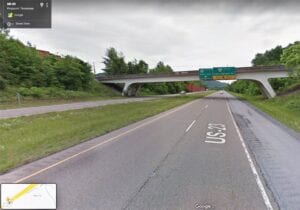 Larry Everidge, a funeral director and member of the Whitesburg City Council, was returning to Letcher County from Knoxville, Tenn., when someone threw a water meter cover from this overpass on U.S. Highway 23N in Kingsport, Tenn. The heavy object crashed through the windshield of Everidge’s Chevy Tahoe, just missing the driver’s head before coming to a rest against the back seat. (Photo courtesy of Google)

The police report lists the crime as property damaged/ destroyed/vandalized with a value estimated at $1,000, but the report leaves some doubt as to whether it was 40-pound steel plate was thrown.

“Larry advised he did not know if someone threw it, or if he hit it. I observed damage to his windshield and the water meter cover in his backseat. I advised Larry on how to obtain a copy of this report. I have photographed the vehicle, and added them to this report,” the officer wrote in the report.

Everidge said he doesn’t know how the plate could have possibly end up in his SUV unless it was thrown off a bridge, and Google Maps shows that Harrison Avenue crosses over the highway less than 1,500 feet from the Weber City exit. The underpass is 1.1 miles from the Valero station where Everidge stopped. That’s about the same distance as from the old Whitesburg High School to the intersection at Tim Short Auto Sales at the west end of the Whitesburg bypass.

Kingsport Police said it appears to be an isolated incident, and there have been no other reports of items being thrown off overpasses. There have been incidents across the United States over the past several years, some of which have resulted in deaths and serious injuries. 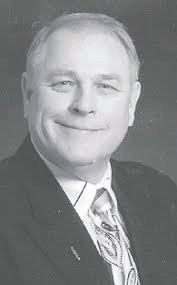 Last year, 33-year-old Keila Ruby Flores died in front of her children after someone threw a rock off an overpass in Texas. The rock went through the windshield of the car in which she and her family were riding and struck her in the head. Joe C. Shelton Jr. of Nashville, Tenn., was killed on his way to work in November 2018 after a chunk of concrete thrown off an overpass went through his windshield and struck him in the face. Similar deaths occurred nearly every year for at least the past 17 years, along with serious injuries. The thrown items have included rocks, concrete blocks, railroad spikes, large pieces of ice and, as in Everidge’s case, steel plates.

Everidge said he thinks it just wasn’t his time to go.