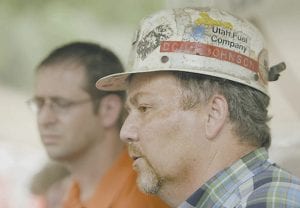 Hundreds of rescuers struggled with falling rock and debris early Tuesday in a desperate race to reach six coal miners trapped 1,500 feet below ground by a cave-in so powerful authorities questioned if it caused its own earthquake.

As the rescue stretched into the night Monday, workers were unable to make significant progress and the initial effort was declared a failure.

More than 16 hours after the collapse, searchers had been unable to contact the miners and could not say whether they were dead or alive. If they survived, Murray said, they could have enough air and water to last several days.

“They could have been struck by material and injured or killed, but we don’t know that yet,” he said.

Rescuers planned to spend the night bulldozing a road outside the mine to make way for a drilling rig that can punch holes large enough to improve ventilation and determine whether the men were alive, Murray said.

They also planned to continue drilling from inside and outside the mine, he said.

The mining crew was believed to be about four miles from the mine entrance. Rescuers were drilling into the mine vertically from the mountaintop and horizontally from the side, Murray said.

If they are able to open an old mine shaft, Murray said, rescuers believe they can get within 100 feet of where the men are trapped.

“The idea is to get a hole into where they are,” Murray said. “They could be in a chamber 1,000 feet long or they could be dead. We just don’t know right now.”

About a mile from the mine’s entrance, there was an all-day procession of trucks hauling heavy machinery headed toward the site to claw at rock and raw earth.

Relatives of the miners waited for news at a nearby senior center. Many of the family members don’t speak English, so Huntington Mayor Hilary Gordon hugged them, put her hands over her heart and then clasped them together to let them know she was praying for them, she said.

“Past experience tells us these things don’t go very well,” said Gordon, whose husband is a former miner.

Outside the senior center, Ariana Sanchez, 16, said her father Manuel Sanchez, 42, was among the trapped miners. She said she cried when her mother told her the news, and declined further comment. No details were immediately available about the other miners.

The mine uses a method called “retreat mining,” in which pillars of coal are used to hold up an area of the mine’s roof. When that area is completely mined, the company pulls the pillar and grabs the useful coal, causing an intentional collapse. Experts say it is one of the most dangerous mining methods.

Federal mine-safety inspectors, who have issued more than 300 citations against the mine since January 2004, were also on hand to help oversee the search.

Murray said no expense would be spared to save the men. The company had enlisted the help of 200 employees and four rescue crews, and brought in all available equipment from around the state.

The mine is built into a mountain in the rugged Manti-La Sal National Forest, 140 miles south of Salt Lake City, in a sparsely populated area.

By mid-afternoon, rescuers were within 1,700 feet of the miners’ presumed location, Murray said. It was not known what kind of breathing equipment the miners had.

The collapse did not appear to be related to an explosion. University of Utah seismograph stations recorded seismic waves of 3.9 magnitude around early Monday in the area of the mine, causing speculation that a minor earthquake had caused the cavein. Scientists later said the collapse at the mine had caused the disturbance, reported to authorities around 4 a.m. But by late afternoon, they said a natural earthquake could not be ruled out and more information was needed to conclusively determine what happened.

Murray said the earthquake’s epicenter was a mile from the trapped miners.

“The whole problem has been caused by an earthquake,” Murray angrily insisted.

Since the mid-1990s, at least a half-dozen other mine collapses have caused similar seismic waves, including a 1995 cave-in in southwestern Wyoming that caused readings as high as a magnitude 5.4.

Murray believed the miners have plenty of air because oxygen naturally leaks into the mine. The mine also is stocked with drinking water.

“I’m so hopeful for those guys. They should have lots of oxygen to breathe,” said Mary Ann Wright, associate director for mining in the Utah Division of Oil, Gas and Mining.

“From not having heard that there’s any type of fire, that’s always good news. If they’re trapped in a cavern area, there should be oxygen to breathe,” Wright said.

Government mine inspectors have issued 325 citations against the mine since January 2004, according to a quick analysis of federal Mine Safety and Health Administration online records. Of those, 116 were what the government considered “significant and substantial,” meaning they are likely to cause injury.

The 325 safety violations is not unusual, said J. Davitt McAteer, former head of the MHSA and now vice president of Wheeling Jesuit University in West Virginia.

“It’s not perfect but it’s certainly not bad,” McAteer said. “It would be in the medium range.”

In 2007, inspectors have issued 32 citations against the mine, 14 of them considered significant.

The head of MSHA, Richard Stickler, said he would be at the site yesterday (Tuesday).