60 years later, his 5th grade teacher is still smart as ever 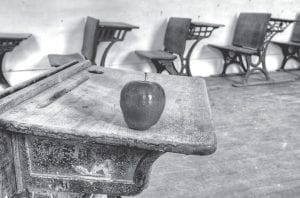 Writer J.T. Oney of Mayking attended Garrett Elementary School in Floyd County 60 years ago. He recently met with his 5th grade teacher, Mrs. Anis Clark, who Oney found to be as spry and intelligent as ever at age 97.

In a previous article, J.T. Oney remembered Mrs. Anis Clark, his fifth grade teacher. At the end of the article he became determined to visit and renew her acquaintance. This is an article about that visit.

On a bright, sunny, Wednesday morning, I left my home in Mayking, drove through Whitesburg and down Route 15, turned right at Carr Creek Lake, drove by Carr Creek High School, where my wife went to school, rode through Hindman, and then took Route 80 to Garrett, where I had grown to manhood.

By the time I had reached the town and turned off the main road, I had formulated a plan for locating Mrs. Anis Clark’s house and/or her telephone number. My first stop would be the local beauty salon. I knew from past experience that, in general, the best place to start looking for a woman, especially an elderly woman, was at the beauty salon. Certainly that was true of my mother who on a regular basis visited the beauty parlor to have her hair done. Small town beauty salons in particular have become gathering places for the older generation where both men and women gather and trade local news.

When I parked in front of the Garrett beauty salon, two women were standing out front looking at a display in a window. Just the very situation I was looking for.

They were discussing how best to straighten a University of Kentucky sign in the window that had somehow become crooked. I stood listening to their conversation and made a comment to the effect that all they had to do was to play a little better offense to straighten things out. The UK sign in the window was quickly forgotten as the women and I began a lively discussion of the upcoming NCAA game. Well, it quickly became obvious that they were both diehard Big Blue fans, and we all three enjoyed the conversation, which went on for about five minutes. By this time the women had settled on a strategy for not only straightening out their sign but also the Cats.

As they started to return to the beauty salon, I asked them about Mrs. Clark. Well, these were mountain women and all indication of friendliness vanished to be replaced by a cloud of suspicion. It became obvious from their face and posture that I would get no information even if I produced a badge and a set of credentials. So I immediately identified myself, which made absolutely no impression. As far as they were concerned, I was an old lecher out for an easy mark and I could shove off or they would call reinforcements from the beauty salon. I suspect that if they had been less proper their words might have been more forceful.

Well, I played my trump card: I identified my parents and grandparents.

The atmosphere immediately changed from a frosty chill to warmth and courtesy. They could not have been more helpful in my locating Mrs. Clark. They bustled around for perhaps five minutes before finally returning with her telephone number.

It was obvious that it was up to Mrs. Clark to provide me her location. I found nothing strange about this, because even in the phone book she was not listed by her first name. After several rings she answered and I thought I recognized her distinctive voice, but was unsure since, after all, it had been more than 60 years.

She immediately responded, “If you are selling something, I am not interested.”

Well, she never was one to beat around the bush, so I realized she had not changed at all in the intervening years.

She immediately asked, “Which one are you?”

Well, from this question you must recognize that a number of us Oneys had gone through her fifth grade class. This was the time when the teacher not only knew the students but also the time when the teacher and families formed a community and knew one another. Mrs. Clark knew my parents by their first name and had known them from the time my dad began to court my mother. This was still the time when parents referred to children’s school as “our” school instead of “their” school. There was no such thing as scheduling a parent teacher conference, for there was continual dialogue between the teachers and parents that took place at the grocery store, the church or, heaven forbid, at the child’s house.

I said, “Ma’am, I’m ‘Jurry.’” I put the emphasis on ‘jur’ just as my mother did in hopes she would recognize me. I should not have worried about that.

She asked, “Do you still have that bright red hair?” Well, she had me there for I was now old, bald and wrinkled, but I could hear the smile in her voice. It finally dawned on my thick head that she was messing with me.

Well, what else could I say? She was my fifth grade teacher and I was not about to lie to her. After several more minutes of conversation, she agreed to see me that afternoon at two o’clock but only with the understanding that I would not attempt to sell her anything. I think she was still messing with me but could not be sure.

If you have ever attempted to find a house in the hills, then you know it is not an easy task. Most of the people in eastern Kentucky are of Scottish descent and seem to believe that distance and difficulty, not fences, make good neighbors. So it was with Mrs. Cark. After getting lost several times, I finally stopped and asked directions to Smackey Bottom from a man mowing his lawn.

After several minutes of discussion, the man realized I had no idea where I was or where I was going and finally said that I should follow him. He led me down the hill and back to the main road where, after several hundred yards, he turned right, then left then right again, went straight ahead for several hundred yards then turned right again, went up a hill and finally pointed to a road leading up another hill, which I took after waving my thanks to the man. Mrs. Clark’s house was on a small promontory at the top of that hill. Well, I suppose the location could be interpreted by locals as “just around the hill.”

As I drove up the hill to her house, I wondered how much she would really remember about me or, especially, the incident that helped change my life. I stopped in her driveway and, undecided if this was the place, decided to call her again. When she answered, I identified where I was and asked if this was her house. She came to her porch and waved to me. I waved back and stepped out of the car and stood next to the car door.

She told me to come on up the steps to her porch. Well, I probably forgot to mention that I only have one leg, courtesy of a past war. I mentioned to Mrs. Clark that I could not make it up the steps because I only had one leg. In a rather exasperated tone, she pointed to a small hill leading up to her main yard just in front of the porch on which she stood and said, “Well, come up the hill.” Which I did.

By the time I got to her porch, I was huffing and puffing. She pointed to a bench on the porch and indicated I should sit there while I recovered. I immediately sprawled onto the bench and, while attempting to catch my breath, I gasped out, “Ma’am, you are looking well.”

She responded with a smile and said, “Well, obviously better than you.” She had me again, for I realized how her formerly boyish fifth grade student must look sprawled on her bench attempting to gain his breath. He was now an old, bald, grey-haired, wrinkled, one-legged man. Well, I figured a big entrance was now out of the question.

Thus began a wonderful twohour discussion between a former student and his teacher.

Mrs. Clark is now 97 years old, and for her age one of the sharpest and most energetic woman I have met. She acts like she is in her early 70s. A really remarkable woman. You can tell her mental faculties are still well above average and she remains just as sharp as I remember. She lives alone and still drives to Garrett twice a week for her mail and to Prestonsburg for groceries once a week.

Her husband, a former superintendent of schools for Floyd County, died in the early 1980s and she has lived alone ever since. She indicated she does quite well in supporting herself and does not mind her own company. That, perhaps, is a sentiment we should all cherish for lots of older people seem to have that same attitude.

Her memory is exceptionally sharp and flexible, and she reminded me of a lot of things I had forgotten. She asked about everyone in my family and was sorry to hear about the passing of my older brother and older sister. She remembered both with fondness. My older brother was a highly decorated Air Force pilot who finished his career flying combat missions over North Vietnam, while my older sister had been a beautiful, gracious homecoming queen.

We recalled and discussed my grade school teachers. Most I recalled with affection for they were outstanding teachers who had the best interests of the children at heart. Not surprisingly she recalled with fondness many of her fifth grade students for there are still some who keep in contact with her. One of the things we both seemed to lament is that at our age we now seem to know more people dead than alive. Strangely we both began to smile and laugh at that shared common thought. I suppose because we each had lived such a full life.

She wanted to know what I was doing in Garrett, and I told her I had come to visit her and that she was first on my bucket list. She smiled broadly and made some irreverent comment that I don’t recall, but she seemed quite pleased and touched that I had made a special effort to once more find her and resume contact. I profusely thanked her for being one of my favorite teachers. Not unexpectedly, she did not recall any specific incident that may have changed my life, but that is all right, because I did. Nevertheless, I did thank her for encouraging me to play basketball, and I told her I felt the lessons learned in playing a team sport had, indeed, served me well in my life and careers.

Our conversation ended too soon for she, like me, now required an afternoon nap. I smiled, said goodbye to her, and once more thanked her for being my teacher. She simply smiled, stood straight, and nodded graciously. Even at 97 years of age, she still remains my beautiful fifth grade teacher.

J.T. Oney served more than 40 years with the U.S. Department of Defense in various military, intelligence and security organizations. He retired in 2000 and taught for 11 years at a small college in Northern Virginia. He is now retired, living in Mayking, and is an Adjunct Professor at the Southeast Kentucky Community and Technical College.