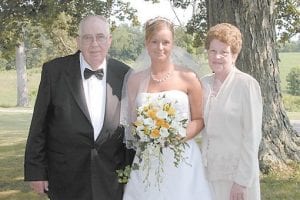 — Carroll and Sara Ruth Shackleford of Big Cowan, shown above left at wedding of their granddaughter Mary, will celebrate their 60th wedding anniversary on February 4. They were married in St Louis on February 4, 1953 (shown in photo at right). They both grew up on Big Cowan before he joined the Air Force, and later retired after 25 years of service to Letcher County. He is the son of the late Susie Day and Price Shackleford, and she is the daughter of the late John D. and Alta Hampton. The couple have six children, Barbara Hughes, Whitesburg; Ronald Shackleford, Kentucky; Dr. Donald Shackleford, Indiana; Debbie Gibson, Ermine; Kathy Thissen, Vine Grove, and the late Jonathan Shackleford. They have nine grandchildren, including the late Oliver Shortt, and five great-grandchildren. The family will have a reception for the couple at the Cowan Community Center on Saturday, February 2, from 1 to 4 p.m. No gifts please. All family and friends are invited. 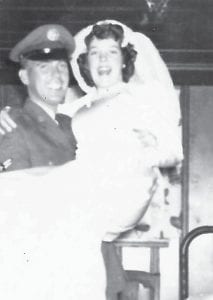