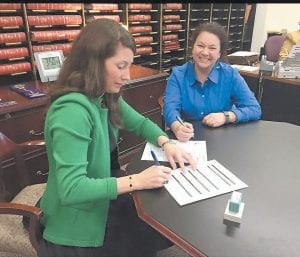 Letcher County is home to three of seven candidates who have filed to run for the 94th District State Representative’s seat being vacated by Leslie Combs.

Colin Fultz, of Camp Branch, drove to Frankfort Tuesday afternoon to file his candidacy papers to run for the Republican nomination against Wesley Doughman of Isom. Also seeking the nod from GOP voters are Charles Phillip Wheeler and Frank D. Justice II, both of Pikeville.

Arriving in Frankfort shortly after Fultz to file candidacy papers with the office of Secretary of State Alison Grimes was Whitesburg attorney Angie Hatton, who makes her home at Dry Fork. Pike County pharmacist Joel Thornbury and Pikeville attorney Ira Edsel Branham will oppose Hatton for the Democrat Party nomination.

In all, five of the seven candidates running for the 94th District seat filed their candidacy papers on Tuesday, the filing deadline for candidates to run in the May primary election, after Combs, a Pikeville resident who has held the seat for 10 years, surprised many by announcing her withdrawal as a Democratic candidate on the day of the filing deadline. 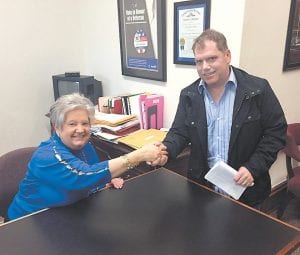 Whitesburg businessman Colin Fultz was congratulated by a clerk in the Secretary of State’s office after filing to run for 94th District State Representative on Tuesday.

Fultz, a 44- year- old former coal miner who is now the co-owner of the Kentucky Mist Moonshine distillery in Whitesburg, said he decided to run for the General Assembly seat because he believes he can work across party lines to do what is best for the people of the 94th District, which includes all of Letcher County and a portion of Pike County.

“I am not for what’s best for me, but what’s for the good of the area,” said Fultz, who worked as an underground coal miner from 1989 until 1995, when he went into private business as a mine contractor. Most recently, Fultz helped start and now helps operate Kentucky Mist, the distillery located in the renovated KYVA Motor Company building in downtown Whitesburg.

Fultz said that if he is elected he will treat the state legislature in the same manner he treats the distillery and the other businesses he operates.

“I do whatever’s best for the company, no matter what,” he said. “We’ve been pushed around long enough in eastern Kentucky.”

The Mountain Eagle also received a statement from Thornbury, who said he too would work to unite Democrats and Republicans.

“I am optimistic that with the kind of energy and vision I can bring to the service of the hard working people of eastern Kentucky that our better days are lie in front of us,” Thornbury, who works at the Nova and Care More pharmacies in Pike County, said. “We simply need to roll up our sleeves and rededicate ourselves to the successful qualities that have been a cornerstone of eastern Kentucky for decades like loyalty, honesty, and determination.”

Thornbury also credited Representative Combs with being “a strong voice and a successful voice for our area.”

Combs, who officially withdrew from the race on Tuesday, said her decision to quit the race came “after much thought and deliberation.” She added that she “will continue doing all I can to support the Democratic Party in Kentucky and to maintain its majority in the House — where it has fought to protect and promote the interests of all Kentuckians.”

“ This decision is not meant to be a good-bye, but rather an opportunity to take on new and exciting challenges,” Combs said.

Combs’s decision to vacate the seat leaves another open seat that Democrats will have to defend in rural Kentucky while they try to stave off a complete Republican takeover of state government as the Kentucky House is the only legislative chamber in the South still controlled by Democrats.

Jim Gooch rebranded himself as a Republican late last year and is part of the GOP’s strategy to try to consolidate its power in the Kentucky Capitol by wresting the House from Democrats. All 100 House seats will be on the November ballot.

Gooch, who cited President Barack Obama’s coal regulations and other issues as reasons for changing parties, predicted it will be a good election year for Republicans in Kentucky.

“I would be very concerned if I was a Democrat running this fall in the last year of Obama with all that he’s going to do with regulations, and not having anyone at the top of the ticket that will bring out votes in rural Kentucky,” the Providence lawmaker said.

Two years ago, Republicans ran an aggressive campaign in trying to unseat Gooch when he was still a Democrat. Gooch on Tuesday shrugged off the hard-hitting tactics as “just politics.”

“We lost 22 years of seniority by him switching parties,” Townsend said in a phone interview Tuesday. “I think people are going to be kind of upset with Jim for doing that.”

Another Kentucky lawmaker who switched parties late last year to become a Republican, Rep. Denver Butler of Louisville, drew two Democratic challengers in what could be another crucial race this fall.

Rep. Johnny Bell of Glasgow, a member of House Democratic leadership, previously decided against seeking another term, as did veteran Democratic Rep. Mike Denham of Maysville.

Those races loom large in the fight for House control in November.

“We’re going to have fights in a lot of these districts,” House Speaker Greg Stumbo said. “I don’t feel like that we’re at a disadvantage. We’ve got good, quality candidates. I think it will be a competitive fall.”

House GOP Floor Leader Jeff Hoover said his party was pleased with its candidate recruitment. “We have accomplished what we wanted, and that was to have a very strong field with a lot of good candidates,” he said.

Due to a flurry of defections and resignations leading up to the start of the 2016 legislative session, Kentucky Democrats saw their majority dwindle to just 50 of the House’s 100 seats. Republicans have 46, with special elections planned March 8 to fill the other four seats.

Both parties have lined up their candidates for the special elections. Hoover said Republicans are competitive in each race, but added: “To run the table will be difficult for either side to do.”

Republican Gov. Matt Bevin is promising an active role on behalf of the GOP House candidates.

“I will do all I can to help them win so we can achieve a Republican majority and make real progress on these fronts,” the governor said.

Republicans are in solid control of the state Senate. Half the Senate’s seats will be on the ballot this fall.