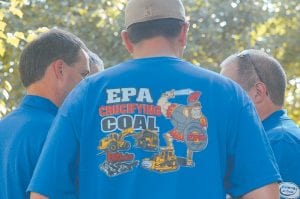 Eastern Kentucky miners let their opinion of the Environmental Protection Agency be known at hearings the agency scheduled in Pikeville last week. (Photo by Marcie Crim)

About 70 coal miners in Letcher County and 15 in Harlan County are losing their jobs as the result of cutbacks in production announced by Alpha Natural Resources.

The miners affected by the cuts announced late last week were employed at three contract mines in Letcher County and one contract mine in Harlan County that were working for operations acquired by Alpha when it purchased Massey Coal Co. in January 2011.

Ted Pile, Alpha’s vice president for corporate communications in Bristol, Va., told The Mountain Eagle the layoffs do not affect any of the mines operated by Alpha’s Enterprise division in Letcher and Knott counties. Pile also said no production cuts were undertaken in neighboring Wise County, Va.

In addition to production cuts at the contract mines here, Alpha said it is idling operations at its Martin County Coal and Sydney affiliates in Martin and Pike counties that Alpha also acquired when it purchased Massey.

“In aggregate the propdhuac’tsio snhicpumtsewntilsl oref dthuecremAal- l coal by an additional two million tons this year and four million tons in 2013,” the company said in a news release.

The company said the closings will result in the loss of about 150 jobs. Another 286 affected workers will be offered jobs at other operations in Kentucky, southern West Virginia and Virginia.

The layoffs come as utilities are aggressively ditching coal in favor of natural gas, which has become cheaper as supplies grow.

“This year, utilities in the U.S. are expected to burn the least amount of steam coal than at any time in the last 20 years, and the pressure’s been very intense on coal sourced from eastern Kentucky, particularly operations rendered uncompetitive due to fuel switching, relatively high rail rates and competition from Illinois Basin coal,” said Kevin Crutchfield, Alpha’s chairman and CEO. “Layoffs are an unfortunate last resort, and it’s tough for miners that want to work but are unable to because of factors beyond their control and the company’s control.”

The share of U.S. electricity that comes from coal is forecast to fall below 40 percent for the year, its lowest level since World War II. Four years ago, it was 50 percent. By the end of this decade, it is likely to be near 30 percent.

Natural gas will be used to produce 30 percent of the country’s electricity this year, up from 20 percent in 2008. Nuclear accounts for 20 percent. Hydroelectric, wind, solar and other renewables make up the rest.

Utilities across the country are grappling with how to store growing piles of unused coal. And legal disputes are breaking out as they try to cancel contracts and defer deliveries.

Alpha plans to produce 11.5 million fewer tons of coal this year, a decline of 11 percent, because so many customers have requested deferrals.

“The U.S. coal industry is confronting a ‘new normal,’ and we want to be sure we have the appropriate operating model, talent and agility to not just survive but emerge a winner,” said Crutchfield.

Coal has dominated the U.S. power industry for so long because it’s a cheap and abundant domestic resource. The U.S. is the world’s second-largest coal producer after China, and it has the world’s biggest reserves — enough to last more than 200 years.

Coal has also enjoyed strong political support because of the jobs it provides in mining and transportation. That helped coal thrive even as environmental concerns over mining practices and air quality grew.

Just five years ago, coal was flourishing in the U.S. With electricity demand and the price of natural gas both rising, coal was viewed as essential to keeping power costs under control. Utilities drew up plans to build dozens of coal-fired plants.

But around the same time, a revolution was under way in the natural gas industry. Drillers figured how to tap enormous deposits of previously inaccessible reserves. As supplies grew and the price of natural gas plummeted, the ground shifted under the electricpower industry.

A pair of clean air rules enacted by the Environmental Protection Agency over the past year tightens limits on power-plant emissions of sulfur dioxide and nitrogen dioxide, and place new limits on mercury, a poison found in coal. This will force between 32 and 68 of the dirtiest and oldest coal plants in the country to close over the next three years as the rules go into effect, according to an AP survey of power plant operators conducted late last year.

Coal was hit with a potentially bigger environmental blow in March when the EPA issued guidelines that could limit greenhouse gas emissions from new power plants as early as 2013. Once the guidelines go into effect, no coal plants will be built unless utilities can develop a cost-effective way to capture carbon dioxide, analysts say. That technology has been slow to develop and is very expensive.

“Even without the EPA rules, coal is not really competitive,” Wang says.

Coal executives are hardly giving up. Nick DeIuliis, President of Consol Energy, a coal and natural gas producer based in Canonsburg, Pa., doubts the EPA’s restrictions on greenhouse gases will survive long term because of the economic harm he says they will inflict.

Consol and other U.S. coal companies hope to be able to keep mines active by exporting more of the country’s huge reserves. Last year U.S. coal exports hit a record 107 million short tons. High grade coal that is used to make steel is in particular demand in developing countries such as China, India and Brazil.

DeIuliis says the price of natural gas will rebound over time and that coal will once again account for half the nation’s electricity. “This is a cycle,” he says.

The futures price of natural gas hit a 10-year low of $1.91 per thousand cubic feet in April. It closed Monday at $2.22 but would have to more than double from there to convince utilities that have a choice of fuels to return to coal whenever possible.

Utilities are forecast to burn 796 million tons of coal this year, a 14 percent decline from last year and the fewest tons since 1992, according to Energy Department data.