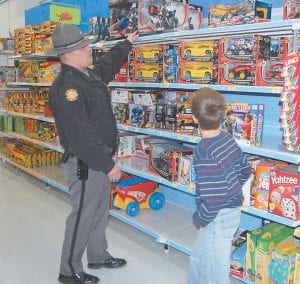 Above, Kentucky State Police Trooper Jody Sims helped a boy pick out a remote control motorcycle during the KSP “Shop with a Trooper” event at the Whitesburg Walmart on Jan. 6.

KSP Det. Clayton Stamper said he had to reschedule the “Shop with a Trooper” event three times because of inclement weather. KSP Post 13 in Hazard serves Letcher, Knott, Leslie, Perry and Breathitt counties. Stamper said school in all five counties had to be in session before the event could take place because the police officers picked the students up at each of their schools before bringing them to the Whitesburg Walmart on Jan. 6.

“It’s usually the first Wednesday or Thursday in December,” he said. “I don’t think anybody had school that day in the entire post district.”

It snowed the next week and then students were on Christmas break.

“I would have liked for them to come before Christmas, but the weather didn’t permit,” said Felicia Bates, Whitesburg Walmart department manager. 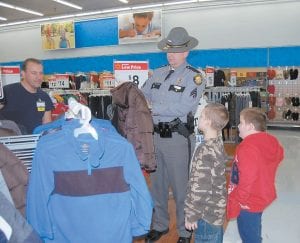 At right, Kentucky State Police Sgt. Barry Engle checked the size of a coat during the KSP “Shop with a Trooper” event. The shopping trip was postponed from before Christmas until last week because of inclement weather. At least 86 children from Letcher, Knott, Leslie, Perry and Breathitt counties were able to pick out items totaling around $125 each.

Thursday morning the store was filled with 86 children, 35 KSP employees, school employees and local officials who assisted with the shopping trip. About $125 was spent on each child.

Letcher County Winston Meade said one of the children he helped picked out gifts for her brother before she even thought about getting items for herself.

“ You would be surprised at what kids buy,” said Stamper. “ They’ll use the money to buy something for their family members. I’ve seen kids before buy presents for their parents.”

Representatives at the Family Resource and Youth Service Centers (FRYSC) at each school suggested students who would benefit from the “Shop with a Trooper” program.

“Another goal of the program is to show the kids that police offi cers aren’t bad,” said Stamper.

Stamper said fund-raising for the shopping trip isn’t too hard.

“A lot of times when people find out what it is for, we get donations pretty easily,” he said.

While children were shopping a man gave a trooper $86 to help with the event.