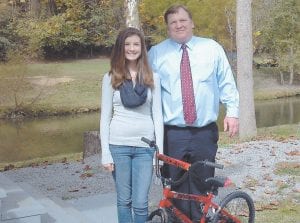 Brooke Saurer, 13, is pictured with Letcher Schools Supt. Tony Sergent after being presented with a new bike, the eighth in a row she has received for her money-raising efforts. Brooke donated the newest bike to the Arlie Boggs Elementary School speech team to use as a fundraiser. Brooke, daughter of James and Valerie Saurer of Partridge, is pictured below with a bike she won when she was eight years old.

An eighth- grader at Whitesburg Middle School has raised at least $3,000 for art and drama programs since kindergarten.

As a kindergartener at Arlie Boggs Elementary School, Brooke Saurer, with the help of her mother Valerie Saurer, wrote letters asking family, friends and businesses to donate money on her behalf to the Letcher County Schools Education Foundation.

Brooke was enticed by the top prize — a bicycle donated by Walmart — given to the student who raised the most money in the school district through the Walk for the Arts program, which brings in about $2,300 each year.

Although Brooke didn’t win a bicycle that first year, she has won a bicycle for the last eight years.

“They compete for that bicycle,” said Sandy Hogg, district director of special programs and safe schools. “We have some that come close each year. They work hard for that bicycle.” 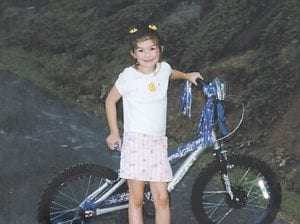 Brooke has donated several of the bicycles to children who didn’t have a bike. At the age of 13, Brooke, who is an eighth-grader at Whitesburg Middle School, raised $260 this year and recently donated the bike to the Arlie Boggs Elementary School speech team.

“She is just a jewel,” said Hogg. “She has done so much work. She has always been so enthusiastic about it. She has really been a model kid all the way around.”

Brooke says what started out as a quest to win a bicycle has turned into a community service project and a way to give back to others.

“Initially, I helped her with a typed letter to family and friends,” said Valerie Saurer. “Soon, she began doing them alone as well as a follow-up thank you letter with the results. We have received donations as far away as Texas.”

Since the Walk for the Arts is now only for sixth-, seventh- and eighth-grade students, this is Brooke’s last year to raise funds for the education foundation.

She encourages students to see how much money they can collect.

“Try to ask your family and see if they will donate and they probably will help you,” said Brooke.

Students are asked to collect a minimum of $5 to participate in the annual Walk for the Arts event, which is held at River Park in Whitesburg each fall. The event is a field day with potato spoon races, a dance competition and foot races.

“It’s a fun day to get out and enjoy the sunshine,” said Hogg.

When the program started during the 2005- 2006 school year, students in grades kindergarten through 12th grade participated. Fleming-Neon, Letcher and Whitesburg high schools were in the process of being consolidated into Letcher County Central High School.

“We thought this was a great way to bring our schools together and let them socialize,” said Hogg. “They get to see each other and meet each other.”

In the beginning of the Walk for the Arts events, art teachers displayed student work at the park.

Now kindergar ten though fifth grades collect money through penny wars. The class and school with the most money collected receive prizes.

In addition to Walk for the Arts, golf scrambles are also held to raise funds for art and drama programs.

For the last three years, the education foundation has awarded $500 mini grants to schools in the district that apply for the grants. Cowan Elementary School, Fleming-Neon Middle School, Letcher County Central High School and Whitesburg Middle School have used the mini grants to help put on drama productions.