‘9 Dragons’ reveals new side of Bosch

By BRUCE DeSILVA The Associated Press 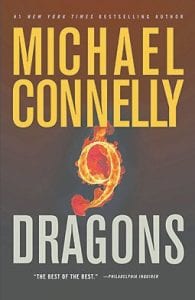 The epigram on the matchbook says “Happy is the man who finds refuge in himself.”

Harry Bosch has been carrying it for 12 years, since he picked it up during a robbery investigation at John Li’s liquor store in South Los Angeles (“Angels Flight”).

Now, as Bosch stands over Li’s body at the beginning of “9 Dragons,” the matchbook is still in his jacket pocket. The detective has never been anything close to happy, but he has found a measure of comfort in the idea that his only refuge lies within.

“All his life,” Michael Connelly writes, “Harry Bosch believed he had a mission. And to carry out that mission he needed to be bulletproof. He needed to build himself and his life so that he was invulnerable, so that nothing and no one could ever get to him.”

Bosch had ventured out of his protective shell just once, marrying a former FBI agent named Eleanor Wish. But it didn’t last long. Later, in “Lost Light,” Bosch learned the union had produced a daughter, but Eleanor kept the child from him and the dangerous life he led, whisking her off to a new life in Hong Kong.

So Bosch remained a tortured loner — until now. In “9 Dragons,” the 15th book in this remarkably fine series of crime novels, the child comes back into his life, giving him all the unfamiliar concerns — and vulnerabilities — of a family man.

Longtime fans of the series will immediately understand Bosch’s bone-deep hunger for fatherhood. They know that he never knew his own father. They know that he was raised in an orphanage after the state took him away from the prostitute who gave birth to him.

So when Bosch’s investigation of Li’s murder entangles him with the Chinese Triads, and the Triads become a threat to his daughter, Bosch blames himself. And he rushes to Hong Kong to rescue her.

Bosch mucks about in the vast, unfamiliar metropolis for a third of the book, its title the English translation of “Kowloon,” a section of the city.

This is the first “fish-out-ofwater” book in the series, the first time Connelly has allowed Bosch to venture far from Los Angeles.

More important, it reveals a side of Bosch we’ve never seen.

Some enduring detective characters, such as Robert B. Parker’s Spenser, have barely changed from book to book. Others, including Bosch and James Lee Burke’s Dave Robicheaux, have evolved gradually, the evils they battle endangering their sanity and even their souls.

But with “9 Dragons,” Connelly has taken a chance by transforming a character millions have come to know well. In doing so, he has made Harry Bosch more human and interesting than ever.