9 reasons to watch Wilcats vs. Cards 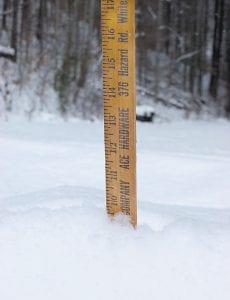 A yardstick indicated that 9-1/2 inches of snowfall had accumulated in Letcher County on Monday morning.

It’s time once again for the Commonwealth’s biggest and most recognized basketball game — this year on a special date and in a special venue.

This game was affectionately labeled by its vast and extremely loyal fan bases as the Battle of the Bluegrass after the Kentucky state legislature threatened in the mid-1980s to pass a law that would basically force the two schools’ athletic directors and coaches to come up with a date to play one game annually, rotating back and forth between Lexington and Louisville. The bill never came to the floor, but the constant pressure from the public forced Joe B. Hall and Denny Crum to reunite the series that hadn’t been held in years.

Over the years each game has been set up with special circumstances and scenarios. This year’s matchup has its own personality as well. It’s the first time the Cats and Cards will play in the new state-of-the-art KFC Yum! Center, already affectionately nicknamed “The Bucket” by the Cardinal fanbase.

If you’re lucky enough to have a ticket, brace yourself for a unique experience. Why, you say? Several reasons and I’ll list them:

# 3 — Calipari and Pitino have been trying to one up each other since the summer on several different topics and scenarios.

# 4 — The athletic directors of the two schools don’t like each other (UofL’s Tom Jurich has been a thorn in the side of UK’s Mitch Barnhart by successfully swinging a few UK high rollers’ pocketbooks toward Louisville.)

# 5 — The President of each in stitution has been known to make a sharp comment on occasion toward the other school’s football and/or basketball team.

# 6 — Each school’s fan base has long hated the other.

# 7 — UK has stolen the national spotlight with three consecutive No. 1 recruiting classes.

# 8 — Rupp Arena no longer is the premier basketball facility in the Commonwealth with Louisville opening the Yum! Center.

# 9 — Several of the state’s politicians and high rollers are fuming behind the scenes in Frankfort that plans are stalling to get UK funding for a new palace for basketball.

All nine reasons I’ve listed have been festering now for several months, and all that envy, jealousy, and tension will come together Friday in a modern, effi cient facility that will off er fans any type of alcohol they desire.

I’m thinking that both the Kentucky State Police and Jeff erson County’s finest better be prepared all day and night this Friday!

Louisville’s bench is deeper than UK’s and this may prove to be very beneficial for the Cards if Pitino gets his way with a quick whistle from the refs. UK can’t give up many fouls with its limited seven-man rotation. Calipari has long claimed privately that Pitino’s teams have gotten away with over-aggressive play, especially with Pitino’s signature press in the backcourt and his perimeter defense in the front court.

Neither team is blessed with an inside game that could make a difference, although I don’t see Louisville having a match for Terrence Jones if he is on his “A” game. Both UK and Louisville’s calling card seems to be perimeter shooting, with UK holding a slight edge in the consistency department. UK has played a much more demanding schedule than Louisville to prepare itself for such an emotional game, but with the game being played in Louisville’s new arena the home court advantage should off set that advantage for UK.

Pitino has been quoted on several occasions in recent years saying, “With my past ties with UK and the success I had there and now being back in the state, I don’t really like this game anymore. I just want to get it out of the way and go on with the season.”

With Pitino’s old friend Bill “Mr. Wildcat” Keightley passing two years ago and the popular John Calipari arrived to take over the reins to what Pitino himself has called “The Roman Empire of college basketball” (and with Louisville opening the KFC Yum! Center), the passion for the UKUofL game seems to be back on with Pitino and as intense as it has ever been.

Jeff Carico, spokesperson for the National Weather Service (NWS) office in Jackson, said as of Monday morning a cooperative weather observer who lives two miles outside of Whitesburg reported 32 inches of snowfall this December. That same observer recorded 11.5 inches of snow for the entire month of December 2009.

From Friday night through Monday morning the weather observer reported accumulation of 11.5 inches. While Letcher County residents were treated to a white Christmas and cold temperatures this year, last year’s holiday was 55 degrees and rainy.

For comparison, however, Carico cited the community of Baxter, which is near Harlan, and has a 30- year average of 13.2 inches of snow for an entire year.

Carico said it is safe to say that Letcher County is “likely above normal” in terms of snow received in 2010.

While the snow was rapidly melting on Tuesday, Carico said Letcher County residents have no reason to fear flooding because the snow that fell was low in water content.

Temperatures are expected to increase later in the week with a highs of 50 degrees on Thursday and 55 degrees on Friday and Saturday. Rain is forecast for the weekend.