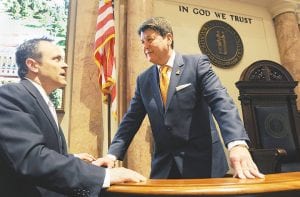 Kentucky Governor Matt Bevin (left) talks with House Leader Greg Stumbo. “We’re going to run against Matt Bevin,” Stumbo says of the Democrat’s strategy for holding onto the state House of Representatives in the November election. “We’re going to make this a referendum about Matt Bevin.” (Courtesy Legislative Research Commission)

On Tuesday, November 8, voters in Letcher County will go to their polling places to cast ballots in a number of races.

And, while the presidential race between Democrat Hillary Clinton and Republican Donald Trump will garner much attention nationally, a handful of races in eastern Kentucky, specifically in Letcher and Pike counties, will also be watched closely at the state and national level. One person has referred to this year’s races for the Kentucky House as the Democratic Party’s “Alamo.” Another pointed to a Pike-Letcher County state House race as the one that may decide the control of Kentucky’s government for the next two years.

With federal money already flowing into local Republican coffers and candidates for the U.S. Senate already having made trips to Letcher and Pike last week, the convergence of different factors, some say, point to the likelihood that both counties will be a battleground leading up to the general election.

Kentucky is the ‘Alamo for the Democrats’

Kentucky, traditionally a Democratic state, has found itself in a unique position recently, boasting of the last Democrat-controlled state legislative body in the South — the Kentucky House of Representatives.

“The Kentucky State House is the last Democrat-controlled legislative body in the south,” Republican Party of Kentucky Communications Director Tres Watson said last week, pointing to West Virginia and Arkansas’ recent flips to Republican. “This is the Alamo for Democrats. They’ve lost the governorship, the Senate’s been gone for years. This is kind of it here.”

Al Cross, director of the Institute for Rural Journalism and Community Issues at the University of Kentucky, also said this could be the year for the Republicans.

“At this point, I would give the Republicans a slight advantage in their efforts to take over the House,” he said.

And, in all the House races, Cross said, the 94th District state House race between former Pikeville Mayor Frank Justice II and political newcomer Angie Hatton, a Whitesburg attorney, may be the one which sets the state’s course for the future.

“ The control of the House may well be decided in the 94th District,” he said. “When you have (Speaker of the House Greg Stumbo) involved in a race next door and another race in the same county, it makes that area a real hotbed of the election.”

And, he said, there will be attention on that race because of the importance.

“That 94th, I think, is going to be the focus of a lot of attention,” he said. “You’ve got two good candidates.

However, he said, Stumbo, as well as House Majority Leader Rocky Adkins, could be in danger of losing their races.

“They have opposition that normally wouldn’t be given a chance,” Cross said. “But in a year when you have a chance of a Republican wave … you certainly don’t want to take anything for granted. I think it’s telling that Greg Stumbo is not going to be at the Fancy Farm picnic.”

Hatton said she sees a potential positive out of the attention being paid to the local races from observers at the state and national level.

“What I love about that is that people are paying attention to Letcher and Pike counties,” she said. “I love that Frankfort has to notice us. Washington is going to notice us because we’re the last House or Senate in the South held by the Democrats.”

Hatton said if that results in people paying attention to the region’s issues, and helping, then that accomplishes her goal in running.

“I did not run this race to hold the House,” she said.

Stumbo said he’s confident the Democrats can hold the House.

“We’ve been through two cycles where we’ve retained our majority with Barack Obama on the ticket,” Stumbo said. “We’re pretty battle-tested and we’re not going to give up easily.”

National politics, Stumbo said, are not his primary concern.

“ What I’m worried about is Matt Bevin and Matt Bevin taking over our state with these radical ideas that he has,” he said. “I’m asking people to reelect me to act as a check and a balance against the governor.

Stumbo said he is confident in Hatton’s ability to win in the 94th District, especially with her support in Letcher County.

Money not yet a factor

Despite the support spoken for the presidential candidates amongst both candidates for local and state offices and the general public, locals aren’t showing the same support with their wallets.

According to Federal Election Commission data, as of the most recent reporting period, Trump has taken in only $2,375 from Pike County contributors, and only $145 from Floyd County donors.

Clinton, the data shows, has received just a little more locally, taking in $3,193 in Pike County and $5,650 from Floyd contributors.

While the local contributions to federal campaigns have been nearly non-existent, national politics have already been a factor in the state House races.

According to FEC records, in March, the Bluegrass Committee, a political action committee linked to U.S. Sen. Mitch McConnell, made an investment in state offices in Kentucky.

Each of the candidates received $1,000 from the Bluegrass Committee, the records show.

The Bluegrass Committee, Cross said, does donate in state House races, but it’s not typical, and he believes it could be a reflection of McConnell’s wishes.

“My guess is they’re more active this time because McConnell is very serious about having Republicans take over the House,” he said.

Cross said the money in these races will likely be difficult to follow because of the involvement of committees and super PACs, which will be a factor.

Outside of eastern Kentucky, Watson said, people are frustrated.

“They’re mad, they don’t quite know who they’re mad at or why they’re mad,” he said. “They just know they’re frustrated and I think Donald Trump has tapped into those people.”

Watson said that the eastern Kentucky support for Bernie Sanders in the May Democratic primary reveals a divide between the party and the people of the region.

“If you really look at the issues, Bernie Sanders is far worse for coal than Hillary Clinton ever would be,” Watson said. “However, Hillary Clinton’s comments that, ‘We have a plan, we’re going to put a lot of coal miners and coal companies out of business’: That resonated in East Kentucky. People heard that message loud and clear.”

And eastern Kentucky is hurting in the current political climate.

“It cannot be described how bad it is in east Kentucky right now,” he said. “ The ailing economy, there’s just a general feeling of defeat. They just feel like they’ve been steamrolled over. ” at

Th anger, Watson said, will likely translate into support for change, especially in the traditionally Democratic areas of eastern Kentucky.

Prior to 2008, Pike County had not been claimed by a Republican presidential candidate since 1972, when Richard Nixon claimed 59 percent of the vote over George McGovern. The same is true for Letcher County, where Nixon defeated McGovern 4,213 to 2,908.

McCain was also the first Republican in the modern era to claim Floyd County, taking 49.4 percent of the vote in the 2008 election, compared to the 48.1 percent taken by Obama.

Letcher County swung even further to the Republican side in the 2012 general election, with Romney getting 6,811 votes to 1,702 for Obama.

This year, Watson said, the swing could be even further.

“I think this is the year they’re finally going to overcome that … (being) culturally Democrat,” Watson said. “I think this is going to be the year where they finally say, ‘Well, granddaddy voted for Roosevelt, but these times, you can’t do it anymore. It’s gotten bad enough. I’m making a switch.’”

Stumbo said he believes that the support for Trump will wane as the election goes on.

“I don’t think in the end Donald Trump will be appreciated perhaps as much as he is right now,” he said. “I think when people sit down and start to really think about this whole decision. Do you really want Donald Trump to have his finger on the nuclear trigger?”

Also, Stumbo said, the only plans introduced to help Kentucky were by Clinton and Gray. McConnell, Stumbo said, has failed to act on behalf of the people of Kentucky since taking the most powerful position in Washington — that of Senate majority leader.

“These guys are just false prophets, they just tell people what they want to hear,” he said.

“One party talks about fear and the other party talks about hope and vision,” he said. “Breeding fear in voters is a tactic that has been deployed ever since we’ve had civilization. If you make people fear something, then they’re more likely to believe something that isn’t true because they want to be made unafraid.”

Who a candidate supports, or even appears to support, for president is already becoming a factor in the races, even months in advance of the general election.

Hatton was one of the speakers at the event, which led to a swift rebuke by Justice, whose campaign sent out a press release later that day claiming that Hatton supports Clinton.

“If you believe in affordable and reliable electricity and jobs for eastern Kentucky, then a vote for the Hatton-Clinton ticket is not a vote for Kentucky,” the press release said, also stating that Hatton and Gray had, during the event, “joined themselves at the hip with the failed policies of the Obama-Clinton War on Coal.”

Hatton answered that she has not announced support for a presidential candidate, and may not do so. However, she said, she will “never cast a vote against coal.”

“I found it amusing, frankly, that Mr. Justice wants to speculate on how I feel about someone else’s race happening nationwide, when we have our own race here,” she said. “I have not endorsed Hillary Clinton.”

The Republicans, she said, share blame for the area’s woes.

Hatton said she doesn’t agree with everything the Democrat Party has done.

“It has to be on my radar because it’s honestly a little bit difficult to be a Democrat in coal country right now,” she said. “My grandfather, Ernest Cook … was a coal operator, and a successful one. It was important to him that his family be registered Democrats and that’s why I’m a registered Democrat. I don’t agree with everything that’s going on at the national level. But I’m not going to abandon the party my grandfather loved. I’m going to try to save it.”

Stumbo has also been criticized for his presence at Gray’s announcement, during which he indicated support for Clinton.

“He’s got a shovel and he’s going to keep on digging here,” Watson said of Stumbo’s spoken support for Clinton.

Cross said he believes Stumbo’s support for Clinton may come from political observation.

“I think that, as the leader of the party, Stumbo really can’t afford to go wobbly,” Cross said, adding Stumbo’s stated support of Clinton, despite her unpopularity may be an effort to not send a bad signal to his base. “He’s being a good soldier, a good leader.

Russ Cassady is the news editor of the Appalachian News-Express in Pikeville.