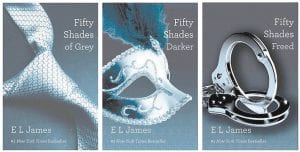 Will little Sophia and Jacob morph into baby Christian and Anastasia about nine months from now?

One night on vacation in Florida was all it took for Betsy Bailey, a labor and delivery nurse, no less, in suburban Chicago. She’s expecting baby number six, conceived soon after reading the steamy bondage love story.

“It was like one night alone,” she laughed. “We went out to dinner and, you know, a little wine, a little stone crab and a little Christian Grey.”

Brittany Woodard, 21, in Norfolk, Va., has a 6-monthold son, Greyson, whose name has absolutely nothing to do with the books Woodard read while her military husband was away for four months.

New to the spicy genre, the stay- at- home mom wasn’t trying for another baby so soon, but she was ready “with many new ideas” in the boudoir department when her husband got home. She’s due in February.

“We just got stationed here a couple of months ago,” Woodard said, “and the week I was going to pick up my birth control we found out we were having another baby!”

Ashley Nealy, 19, in Fayetteville, N.C., bought into the Fifty Shades buzz for the love story between dominant billionaire Christian and shy, clumsy Ana Steele, whom he attempts to groom as a sexual submissive, until cupid strikes and they live happily ever after.

With a year-old son, another baby wasn’t on Nealy’s front burner, but reigniting what she had with her fiance before their exhausting life as new parents was.

“Having a baby takes a toll on your relationship, especially as young as we are,” she said. “Things had kind of died down, so I wanted to do something to help maybe get things back to the way they used to be between us.”

Before “Fifty,” they were down to once a week in the bedroom. “While I was reading them it was just about every day,” she said.

Son Kayden’s sibling is also scheduled to arrive in February.

At BabyCenter.com, a large online community of moms and expectant moms, nearly 150 women have posted that their pregnancies are directly related to more baby-making activity inspired by the best-selling books that have sold 31 million copies in all formats.

Bailey’s No. 6 is due Christmas Day, her 42nd birthday. She and her husband always knew they wanted a big family, but they thought big would be four kids.

“We picked up our fifth in Mexico. He was a vacation baby as well,” she joked. “We call him the worm at the bottom of the tequila bottle.”

Christian and Ana aren’t on her name list, though her great-grandmother’s maiden name, Gray, had been a possibility — until now. “Now I don’t think I could do it,” Bailey said.