Price raises question: How much is a life worth? 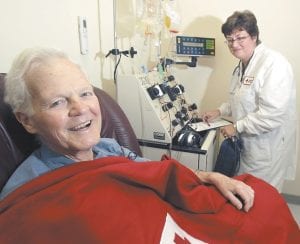 Bob Svensson was hooked up to a blood infusion machine under the care of Nancy Grant, a registered nurse at the American Red Cross in Dedham, Mass., as he underwent a $93,000 prostate cancer treatment. The Provenge therapy, approved in April, adds four months’ survival, on average, for men with incurable prostate tumors. Svensson is honest about why he got it: insurance paid. “I would not spend that money,” because the benefit doesn’t seem worth it, says Svensson, 80, a former corporate finance officer from Bedford, Mass. (AP Photo)

Cancer patients, brace yourselves. Many new drug treatments cost nearly $100,000 a year, sparking fresh debate about how much a few months more of life is worth.

The latest is Provenge, a first-of-a-kind therapy approved in April. It costs $93,000 a year and adds four months’ survival, on average, for men with incurable prostate tumors. Bob Svensson is honest about why he got it: insurance paid.

“I would not spend that money,” because the benefit doesn’t seem worth it, says Svensson, 80, a former corporate finance officer from Bedford, Mass.

His supplemental Medicare plan is paying while the government decides whether basic Medicare will cover Provenge and for whom. The tab for taxpayers could be huge — prostate is the most common cancer in American men. Most of those who have it will be eligible for Medicare, and Provenge will be an option for many late-stage cases. A meeting to consider Medicare coverage is set for Nov. 17.

“I don’t know how they’re going to deal with that kind of issue,” said Svensson, who was treated at the Lahey Clinic Medical Center in suburban Boston. “I feel very lucky.”

For the last decade, new cancer-fighting drugs have been topping $5,000 a month. Only a few of these keep cancer in remission so long that they are, in effect, cures. For most people, the drugs may buy a few months or years. Insurers usually pay if Medicare pays. But some people have lifetime caps and more people are uninsured because of job layoff s in the recession. The nation’s new health care law eliminates these lifetime limits for plans that were issued or renewed on Sept. 23 or later.

Celgene Corp.’s Revlimid pill for multiple myeloma, a type of blood cancer, can run as much as $10,000 a month; so can Genentech’s Avastin for certain cancers. Now Dendreon Corp.’s Provenge rockets price into a new orbit.

Unlike drugs that people can try for a month or two and keep using only if they keep responding, Provenge is an all-or-nothing $93,000 gamble. It’s a one-time treatment to train the immune system to fight prostate tumors, the first so-called cancer vaccine. Part of why it costs so much is that it’s not a pill cranked out in a lab, but a treatment that is individually prepared, using each patient’s cells and a protein found on most prostate cancer cells. It is expensive and time-consuming to make.

It’s also in short supply, forcing the first rationing of a cancer drug since Taxol and Taxotere were approved 15 years ago. At the University of Texas M.D. Anderson Cancer Center, doctors plan a modified lottery to decide which of its 150 or so eligible patients will be among the two a month it can treat with Provenge. An insurance pre-check is part of the process to ensure they financially qualify for treatment.

For other patients on other drugs, money already is affecting care:

— Job losses have led some people to stop taking Gleevec, a $4,500-a-month drug by Novartis AG that keeps certain leukemias and stomach cancers in remission. Three such cases were recently described in the New England Journal of Medicine, and all those patients suff ered relapses.

— Retirements are being delayed to preserve insurance coverage of cancer drugs. Holly Reid, 58, an accountant in Novato, Calif., hoped to retire early until she tried cutting back on Gleevec and her cancer recurred. “I’m convinced now I have to take this drug for the rest of my life” and will have to work until eligible for Medicare, she said.

— Lifetime caps on insurance benefits are hitting many patients, and laws are being pushed in dozens of states to get wider coverage of cancer drugs. In Quincy, Mass., 30-year-old grad student Thea Showstack testified for one such law after pharmacists said her first cancer prescription exceeded her student insurance limit. “They said ‘OK, that will be $1,900,’” she said. “I was absolutely panicked.” The federal health care law forbids such caps on plans issued or renewed Sept. 23 or later.

— Tens of thousands of people are seeking help from drug companies and charities that provide free medicines or cover copays for low-income patients. Genentech’s aid to patients has risen in each of the last three years and the company says nearly 85 percent of Americans earn less than $100,000, making them potentially eligible for help if no other programs like Medicaid will pay.

— Doctors and insurers increasingly are doing the cruel math that many cancer patients want to avoid, and questioning how much small improvements in survival are worth. A recent editorial in a medical journal asked whether the extra 11 weeks that Genentech’s Herceptin buys for stomach cancer patients justified the $21,500 cost.

Doctors also have questioned the value of Genentech’s Tarceva for pancreatic cancer. The $4,000-a-month drug won approval by boosting median survival by a mere 12 days. Here’s how to think about this cost: People who added Tarceva to standard chemotherapy lived nearly 6 1/2 months, versus 6 months for those on chemo alone. So the Tarceva folks spent more than $24,000 to get those extra 12 days.

When is a drug considered cost-effective?

The most widely quoted figure is $50,000 for a year of life, “though it has been that for decades — never really adjusted — and not written in stone,” said Dr. Harlan Krumholz, a Yale University expert on health care costs.

Many cancer drugs are way over that mark. Estimates of the cost of a year of life gained for lung cancer patients on Erbitux range from $300,000 to as much as $800,000, said Dr. Len Lichtenfeld, the American Cancer Society’s deputy chief medical officer.

Higher costs seem to be more accepted for cancer treatment than for other illnesses, but there’s no rule on how much is too much, he said.

Insurers usually are the ones to decide, and they typically pay if Medicare pays. Medicare usually pays if the federal Food and Drug Administration has approved the use.

“Insurance sort of isolates you from the cost of health care,” and if people lose coverage, they often discover they can’t afford their medicines, said Dr. Alan Venook, a cancer specialist at the University of California, San Francisco. He wrote in the New England Journal in August about three of his patients who stopped taking or cut back on Gleevec because of economic hardship.

Two of the three now are getting the drug from its maker, Novartis AG, which like most pharmaceutical companies has a program for low-income patients. About 5,000 patients got help for Gleevec last year, said Novartis spokesman Geoffrey Cook.

“We have seen a steady increase in requests over the past few years” as the economy worsened, he said.

Showstack, whose leukemia was diagnosed last year, gets Gleevec from Novartis. The dose she’s on now would cost $50,000 a year.

“I’m not actually sure that I know anyone who could afford it,” she said.

Gleevec’s cost is easier to justify, many say, because it keeps people alive indefi- nitely — a virtual cure. About 2,300 Americans died each year of Showstack’s form of leukemia before Gleevec came on the market; only 470 did last year.

“I don’t think we quibble with a drug that buys people magical quality of life for years,” Venook said.

It ’s unclear whether Provenge will ever do that — it needs to be tested in men with earlier stages of prostate cancer, doctors say. So far, it has only been tried and approved for men with incurable disease who have stopped responding to hormone therapy. On average, it gave them four months more, though for some it extended survival by a year or more.

Until it shows wider promise, enthusiasm will be tepid, said Dr. Elizabeth Plimack a prostate specialist at the Fox Chase Cancer Center in Philadelphia.

“I’ve not had any patient ask for it,” she said. “They ask about it. Based on the information, they think the cost is tremendous, and they think the benefit is very small.”

Logothetis, at M.D. Anderson, said Provenge and other experimental cancer vaccines in development need “a national investment” to sort out their potential, starting with Medicare coverage.

“It’s no longer a fringe science. This is working,” he said. “We need to get it in the door so we can evolve it.”

Where to get help: