A bad year for public health 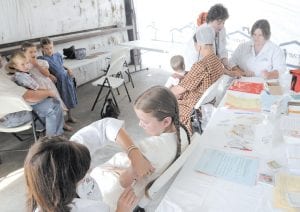 In this photo taken during September, nine-year-old Nowa Paye is taken to an ambulance after showing signs of the Ebola infection in the village of Freeman Reserve, about 30 miles north of Monrovia, Liberia. (AP Photo)

Health officials are celebrating some important victories in 2014, and Time magazine even named Ebola fighters the persons of the year. Nevertheless, this was a black-eye year for public health.

Some vital vaccines did not work well. Federal laboratories were careless with dangerous pathogens. And international health officials failed to stop a West Africa outbreak from exploding into the worst Ebola epidemic ever.

Such failings occurred during one of the busiest 12 months of contagions in at least a decade. In the United States, infectious disease menaces seemingly whizzed at us from every direction, from Ebola and enterovirus to measles and MERS. Mumps plagued Ohio. California saw its worst whooping cough outbreak in 70 years. And a mosquito-borne disease called chikungunya burned through the Caribbean and took root in the United States.

The last time U.S. health officials were this frantic was 2009, when a flu pandemic swept the globe. “But that was one disease,” while 2014 had more of a variety of fires to put out, said Dr. Marci Layton of New York City’s health department.

Experts say this year’s tumult was caused by a combination of things. Many cite the impact of international travel, which can bring an exotic disease from the jungles of Africa or the desserts of the Middle East to a U.S. airport in a matter of hours.

“If anyone still needed convincing, 2014 really showed that a disease threat anywhere is a disease threat everywhere,” said Dr. Tom Frieden, director of the U.S. Centers for Disease Control and Prevention.

But experts say others factors this year were shortcomings and errors at the CDC and in other public health organizations.

The leading example was the Ebola epidemic. Previous outbreaks numbered in the hundreds. As of mid- December, health officials were reporting this year’s epidemic had sickened more than 18,600 people, the vast majority in Guinea, Liberia and Sierra Leone. Of those, more than 6,900 died.

Those three nations were not prepared when Ebola visited them for the first time. Health systems were very weak after more than a decade of war in the region. Doctors were scarce in many areas. Ebola was sometimes mistaken for malaria, especially in the early stages, and care and infection control were poor.

An aid effort was led by the World Health Organization — the United Nations’ health agency. But the WHO staff let bureaucratic bungles delay important work, and was hampered by budget cuts and responsibilities elsewhere, a WHO internal report later concluded.

For months, the WHO got only limited help from various nations, and it wasn’t until the late summer — after the epidemic was out of control — that the United States and other countries pledged more substantial assistance.

The CDC was in charge of the U.S. Ebola response, and initially everything seemed well under control. CDC sent teams to help in West Africa. Frieden repeatedly assured Americans they were safe from an Ebola outbreak here, and that U.S. hospitals were able to isolate and handle any cases that should arrive from West Africa.

But public confidence was shaken after a Liberian visitor named Thomas Eric Duncan came down with the infectious disease in late September, days after he arrived in Dallas. He died October 8, and two nurses who treated him at a Dallas hospital were infected.

How the nurses caught Ebola was unclear, but Frieden later said he should have sent a much larger team to Dallas initially to help hospital workers prevent any spread of the virus.

No one besides Duncan died of Ebola in the United States, and no other transmission of the disease was ever reported, and yet Frieden came under heavy criticism for the CDC’s handling of Ebola. Some politicians called for his dismissal. President Barack Obama stuck with Frieden, but appointed an ‘Ebola czar’ to help coordinate the government’s response.

Some other lowlights from 2014:

— In January, a CDC lab scientist in Atlanta accidently mixed a deadly strain of bird flu with a tamer strain, and the mix was later sent to unaware workers at two other labs. In June, another CDC lab failed to kill anthrax samples before sending them to two labs with fewer safeguards for containing dangerous germs. No one got sick from either incident, fortunately. The anthrax lab director resigned and administrative action was taken against “a few” other employees, a CDC spokesman said.

— Another startling lab failing was discovered at the National Institutes of Health campus in Bethesda, Maryland. A scientist cleaning out an old storage room discovered forgotten, 60-year-old vials of smallpox virus, one of the most lethal infectious agents in human history. No one got sick from that incident, either. But government lab practices became both a point of concern and something of a joke.

— In May, health officials identifi ed a doctor who traveled from Saudi Arabia to Indiana as the first U.S. case of Middle East respiratory syndrome, or MERS. They also said the doctor apparently had spread MERS to an Illinois man he’d met in a business meeting. But what initially seemed to be the first transmission of MERS in this country wasn’t. CDC officials backtracked when additional testing showed the virus had not, in fact, spread to the second man.

— Researchers have come to believe the vaccine that’s been used since the 1990s against whooping cough does a poor job of preventing spread of the disease. Health officials believe that failing was an important contributor to an epidemic this year in California, where nearly 10,000 cases were reported through the end of November. Only 10 percent of children sickened in the epidemic had not been vaccinated against pertussis, according to a review of available records.

— This was the worst year for measles since 1994. About 600 cases were reported in Americans through the first week of December — more than the combined total from the previous five years. The measles vaccine seemed to work fine. The vast majority were unvaccinated people who fell sick in outbreaks sparked by a traveler who picked up the disease in another country and then spread it in the United States.

— Enterovirus 68, a respiratory virus that traditionally kept a low profile, became a national health concern in the late summer as some pediatric hospitals were flooded with wheezing children. Worries hit a new level when doctors noted some children with the virus also developed weakness or paralysis in their arms or legs. By early December, more than 1,100 infected people in 48 states had respiratory illness, including 12 who died. CDC also had reports of paralysis in 94 children in 33 states, though investigators are still trying to establish whether enterovirus 68 was the cause.

Infectious diseases are a continuing threat, and no one should think of 2014 as an aberration, said Michael Osterholm, a University of Minnesota infectious disease expert.

“I think what we really hit is a new normal,” he said.

To be sure, there were public health success stories in 2014. There were not large U.S. outbreaks of MERS or Ebola. In Africa, though Ebola appeared in Nigeria, Senegal and Mali, it petered out during intense public health responses. The disease is still raging elsewhere, particularly in Sierra Leone, but the U.S. Congress acted to bolster the fight with approval this month of a $5.4 billion emergency appropriation. And some experts say Frieden deserves points for his forthright disclosures about — and attempts to correct — failings as they were discovered.

‘Also, the health care and public health workers who went to West Africa did show uncommon heroism, as Time magazine noted. “The response to Ebola has been extraordinary” in both its scope and valor, Frieden said.