A barred owl was highlight of Cowan stay 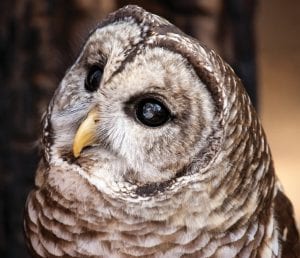 At first glance, The Cowan Creek Cottage, listed at Airbnb.com, appears to be just that, a pretty little country home with a welcome mat thrown across the foot of the front porch steps. Step inside and it looks/feels more than twice as large and spacious as it did outside.

Loretta, Andy and I had booked the cottage so that we could take in Blackey Days on October 11 and 12.

I didn’t realize, until after we’d already made the reservations, that it was owned and operated by my old friends and former (early 1970s) professional colleagues, Carol and Kendal Ison. A big hug from Carol and an extended handshake from Kendal upon our arrival was icing on the cake this incredibly accommodating cottage turned out to be.

Don’t take my word for it. If you are planning a trip to the mountains of eastern Kentucky, Google the place. You will be hard put to find a nicer, cleaner, more pleasant, place to stay and get a taste of the best of eastern Kentucky. If anything, the website sells Cowan Creek Cottage short. At least our visit turned out to be more understated than the promotional literature suggested it might be.

On Friday night, just before bedtime, I stepped out onto the front porch to check on the weather. I’d no sooner sat down in one of the two big rocking chairs, than a barred owl, perhaps 500 feet up the hill directly in front of the cottage, called out so loudly that it seemed to shake my chair. I’d be willing to bet that neighbors, well over a mile away, also heard it calling.

We frequently have great horned owls talking to one another just across the way at our place on Charlie Brown Road, but I haven’t heard a barred owl here in, probably, ten years. I used to take great satisfaction in calling in the barred owls so closely that they would often perch on the telephone pole at the edge of our front lawn. Great horned owls emit less than half the volume of barred owl calls and are not so easily fooled.

After signaling Loretta and Andy to come and listen, I tried talking back to the barred owl, only to realize that, like carrying any tune, making the owl’s distinct call is another thing that Mr. Parkinson has made impossible for me. Even though I was unable to talk it into coming closer, I believe that Lo and Andy were also impressed that it was as loud and as close by the cottage as it was already. I doubt that anybody would have been as thrilled as yours truly.

After signing the cottage guest book and heading home, I almost had Loretta turn around and take us back so that I could thank the Isons for the owl. It was one of the biggest highlights of my trip!

Saturday afternoon, while sitting the same rocking chair, I decided to take mental inventory of the variety of tree species I could identify and count within view of the cottage front porch. After getting to somewhere around 30, I lost count. I feel sure that, had I made a written list, I could have identified/named at least 40 different varieties of native trees and shrubs as well as a comparatively small handful of domesticated bushes that had inserted themselves into the surrounding woods.

While the nearby forest is mostly deciduous, there is a sprinkling of hemlock, pines and at least one spruce that may have originated as a non-native Christmas tree. A couple of dogwoods, among the natives, and some mimosa most likely came from parts unknown.

By way of comparison, I came home and spent over an hour on my own front porch, gazing at our surrounding woods. After trying as hard as I could to take inventory of the botanical diversity of our adjacent forest, I found that I could name fewer than 20 tree varieties.

Of course we don’t have a nice, big rocking chair, like the ones on Cowan Creek, and that may have made the difference. In the meantime, I plan to record a barred owl call off YouTube. I’ll play it back tonight at full volume and see if I can entice one to come calling back to Charlie Brown Road.