A block for sleep apnea? 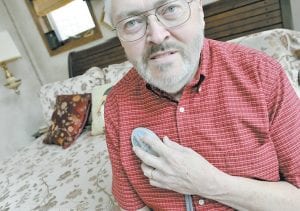 Rik Krohn displayed the remote control unit he uses to turn on an experimental nerve stimulator to combat his sleep apnea at his home in Burnsville, Minn. (AP Photo)

Loud snoring may do more than irritate your spouse: It can signal sleep apnea, depriving you of enough zzzz’s to trigger a car crash, even a heart attack.

Now scientists are beginning to test if an implanted pacemaker-like device might help certain sufferers, keeping their airways open by zapping the tongue during sleep.

Wait, what does your tongue have to do with a good night’s sleep?

One of the main causes of obstructive sleep apnea is that the tongue and throat muscles relax too much during sleep, enough to temporarily collapse and block breathing for 30 seconds or so at a time. The person jerks awake and gasps, a cycle that can repeat itself 30 or more times an hour, depriving patients of crucial deep sleep.

The idea behind the experimental implant: Stimulate the nerve that controls the base of the tongue with a mild electrical current during sleep, and maybe it will stay toned and in place like it does during the day rather than becoming floppy.

By the end of January, Minneapolis-based Inspire Medical Systems plans to begin enrolling 100 apnea patients in a key study in the U.S. and Europe to see if so-called hypoglossal nerve stimulation really could work. Two competitors are developing similar implants: ImThera Medical of San Diego says it hopes to begin U.S. studies later next year, and Apnex Medical of St. Paul, Minn., has announced some small-scale testing.

“In this kind of research, we’re not looking for little changes,” says Dr. Meir Kryger, a sleep medicine specialist at Gaylord Hospital in Connecticut, who is helping to lead Inspire’s study. “What we’re looking for is actually cure.”

More than 12 million Americans have obstructive sleep apnea, according to the National Institutes of Health. It’s particularly common in people who are overweight and in middle-aged men, but anyone can have it.

Today’s undisputed best treatment, called CPAP, uses special bedtime masks to gently blow air through the nose to keep airways open. But studies suggest at least 30 percent of diagnosed apnea patients won’t or can’t use CPAP. They cite masks that fit poorly and leak, or say they feel claustrophobic, or rip them off while tossing and turning during the night.

Yet going untreated is more dangerous than just feeling tired. Sleep apnea stresses the body in ways that increase the risk of high blood pressure, heart attack, stroke and diabetes. More immediately, severe apnea increases the chance of a car crash sevenfold. Last year, the National Transportation Safety Board recommended that pilots, truck drivers and other commercial transportation operators start being screened for apnea, saying it has been a factor in incidents involving every mode of transit.

Surgeons sometimes try removing part of the roof of the mouth or other soft tissues to treat apnea by widening airways. But it’s hard to predict when these difficult operations will help, so they’re usually reserved for the most severe cases.

“It got to the point where I’d dread going to bed,” says Rik Krohn, 67, of suburban Minneapolis. Sleep studies showed his apnea was awakening him an average of 35 times an hour. He tried five different CPAP masks unsuccessfully before giving up in frustration, and surgeons turned him away.

With Inspire’s system, doctors implant a small pacemaker like generator under the skin near the collarbone, and snake a wire up under the jaw to that tongue-controlling nerve. A sensor at the diaphragm detects when a patient takes a breath, signaling the implant to zap the nerve. Researchers adjust the power so that the nerve is stimulated just enough to keep the tongue from falling backward during sleep but not to stick out. Patients turn on the device at bedtime with a remote control, complete with a timer they can set so they fall asleep before the pulses begin.

“I don’t have any idea while I’m sleeping that it’s on,” says Krohn, the Minnesota man who’d given up on apnea treatment until volunteering for an early Inspire study last year — and says he now gets a good night’s sleep. “It’s a game-changer for me.”

A caveat: Potential participants in Inspire’s upcoming study must undergo a special exam where a tube snaked down the airway documents whether a tongue collapse or a problem with some other tissue is the true cause of their apnea, stresses Connecticut’s Kryger.

“It’s very important to see where the obstruction is and tailor the treatment,” agrees Dr. Rick Odland, Krohn’s surgeon at Minneapolis’ Hennepin County Medical Center. He turned away another potential candidate in earlier testing when that exam showed zapping the tongue would have targeted the wrong spot.

These experiments are only now beginning, with a handful of implants performed so far — and while it’s an interesting concept, frustrated patients should try some proven steps first, cautions, Dr. Amy Atkeson of Columbia University Medical Center in New York.

Her advice: Don’t give up on CPAP without first seeing an experienced sleep technician to adjust humidity levels and take other steps that not every CPAP prescriber knows to try — and if you’re overweight or obese, apnea greatly improves with weight loss.