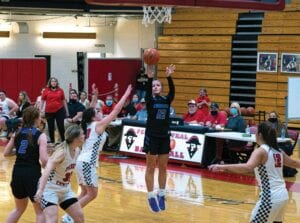 Letcher Central junior Kaylee Banks was commanding in the opening round of the 14th Region Tournament last Friday. Banks led all scorers in the 48-47 nail-biter win over host Perry Central, scoring 22 points and pulling down nine rebounds in the game. The Lady Cougars went on to defeat Powell County on Monday and were set to play in the regional championship game on Tuesday. That game, a rematch with the Lady Cougars’ arch rival Knott County Central, ended after press time on Tuesday. 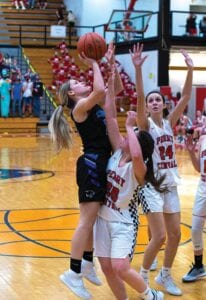 Letcher Central’s Loren Boggs pulled up for a short jumper in the opening round win in the 14th Region Tournament. Boggs scored six points in the game. 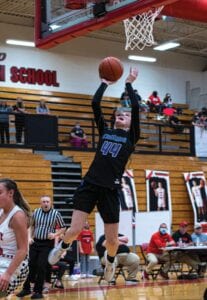 Letcher Central freshman Jaylin Whitt flew toward the basket on a layup attempt. Whitt hit the basket, but the score was waved off after a violation was called.