A cure for peanut allergies? 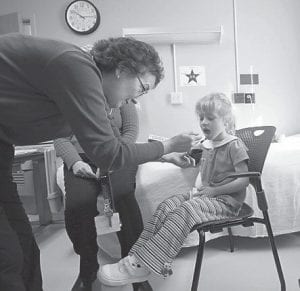 Hanna Carter, 5, of Roanoke, Va., takes a dosage of peanut protein from Nurse Practitioner Pam Steele at the Duke South Clinic at Duke University in Durham, N.C. Hanna is being treated for peanut allergies. A handful of children once severely allergic to peanuts now can eat them without worry. (AP Photo)

Scientists have the first evidence that life-threatening peanut allergies may be cured one day.

A few kids now are allergy-free thanks to a scary treatment — tiny amounts of the very food that endangered them.

Don’t try this at home. Doctors monitored the youngsters closely in case they needed rescue, and there’s no way to dice a pean ut as sm all as the tr eatment doses required.

But over several years, the childr en’s bodies learned to tolerate peanuts. Immune-system tests show no sign of remaining allergy in five youngsters, and others can withstand amounts that once would have left them wheezing or worse, scientists reported this week.

Are the five cured? Doctors at Duke University Medical Center and Ar kansas Children’s Hospital must track them years longer to be sure.

“We’re optimistic that they have lost their peanut allergy,” said the lead researcher, Dr. Wesley Burks, Duke’s allergy chief. “We’ve not seen this b efore medically. We’ll have to see what happens to them.”

More rigorous research is under way to confirm the pilot study, released Sunday at a meeting of the American Academy of Allergy, Asthma and Immunology. If it pans out, the approach could mark a major advance for an allergy that afflicts 1.8 million people in the United States.

For parents of these little allergy pioneers, that means no more fear that something as simple as sharing a friend’s cookie at school could mean a r ace to the emergency room.

“It’s such a b urden lifted off y our shoulder to realize you don’t have to worry about your child eating a peanut and ending up really sick,” said Rhonda Cassada of Hillsborough, N.C. Her 7-year-old son, Ryan, has been labeled allergy-free for two years and counting.

It’s a big c hange for a child who co uldn’t tolerate onesixth of a peanut when he entered the study at age 2-1/2. By 5, Ryan could eat a whopping 15 peanuts at a time with no sign of a reaction.

Not that Ryan grew to like peanuts. “They smell bad,” he said matter-of-factly.

Millions of people have food allergies and peanut allergy is considered the most dangerous, with lifethreatening reactions possible from trace amounts. It accounts for most of the 30,000 emergency-room visits and up to 200 deaths attributed to food allergies each year. Although some children outgrow peanut allergy, that’s rare among the sever ely affected.

There’s no way to a void a r eaction other th an avoiding peanuts. Those allergy shots that help people allergic to pollen and other environmental triggers reduce or eliminate symptoms — by getting used to small amounts of the allergen — are too risky for food allergies.

Twenty-nine severely allergic children spent a day in the hospital swallowing minuscule but slowly increasing doses of a specially prepared peanut flour, until they had a reaction. The child went home with a daily dose just under that reactive amount, usually equivalent to onethousandth of a peanut.

After eight months to 10 months of gradual dose increases, most can eat the peanut-flour equivalent of 15 peanuts daily, said Burks, who two years ago began reporting these signs of desensitization as long as children took their daily medicine.

Nine children who had taken daily therapy for 2-1/2 years were given a series of peanut challenges. Four in the initial study report — and a fifth who finished testing last week — could stop treatment and avoid peanuts for an entire month and still have no reaction the next time they ate 15 whole peanuts. Immune-system changes suggest they’re truly allergy-free, Burks said.

“Anything that would enable kids to eat peanuts would be a major advance,” Plaut said, cautioning that more study is needed. ” This paper, if it ‘s correct, takes it to the next level. … That is potentially very exciting.”

Arkansas Children’s Hospital has begun a st udy randomly assigning youngsters to eat either peanut flour or a dumm y flour. It’s not over, but after the first y ear, the treated group ate the equivalent of 15 peanuts with no symptoms while the placebo group suffered symptoms to the equivalent of a single peanut, Burks said.

The treatment remains experimental, Burks stressed, although he hopes it will be ready for prime time in a few years.

He isn’t taking chances with the first five allergy-free kids. They’re under orders to eat the equivalent of a tablespoon of peanut butter a day to keep their bodies used to the allergen.

Ryan Cassada says his mom sometimes “hides them in things so she can force me to eat it.” Peanut butter cookies are OK, he says, just not straight peanut butter.

The battle is a small price, his mother said. “As much as I c an get in to him is fine with me . It’s huge knowing he won’t have a reaction.”