A day for dedications 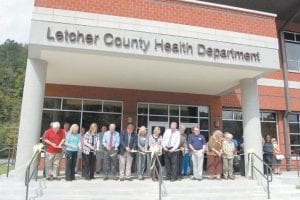 Many positive changes have taken place in downtown Whitesburg during 2009, and many of those responsible for making things better chose the Whitesburg Day portion of the annual Mountain Heritage Festival to publicly acknowledge some of what has taken place. A new health building, a new pedestrian bridge, and additions to the public library and community college were among the achievements celebrated in dedication ceremonies which took place on the afternoon of Sept. 23. (Photos by Sally Barto) 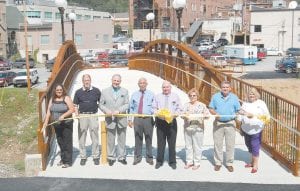 A ribbon-cutting ceremony for the James W. Bates Bridge was held Sept. 23. The bridge is named after Whitesburg City Council Member Jimmy Bates, a Vietnam veteran and past state commander of the Veterans of Foreign Wars (VFW) organization. “This is a special day for me,” said Bates, who can be seen fourth from right in the photo above. “It’s a wonderful thing. It’s a privilege and an honor.” Pictured from left are Council Member Sheila Short, former Council Member Perry Fowler, Council Member Larry Everidge, Whitesburg Mayor James Wiley Craft, Bates, Council Member Robin Watko, Council Member John Williams and Council MemberFrieda McFall. 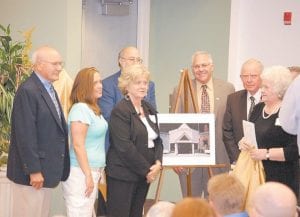 Seen in the foreground of the photo above are Dan Combs, Emily Kincer, Anna Caudill Craft, James M. Caudill Jr., and Penny Caudill Ritter Combs. The five were at the Whitesburg campus of Southeast Kentucky Community and Technical College on Sept. 23 to help mark the 20th anniversary of the school’s arrival in Whitesburg. As part of the ceremony, the old Coca-Cola Bottling Co. building which serves as the centerpiece of the campus was renamed Caudill Hall in honor of the late James M. Caudill Sr., founder of the old First Security Bank (now known locally as Community Trust Bank) and former Letcher County Judge. The celebration also included a ribbon-cutting ceremony for the Belinda Mason Building; the naming of the James D. Asher Pedestrian Bridge; the naming of the Cora Reynolds Frazier Auditorium; the naming of the Mary Bingham Library, and the naming of the Hogg Allied Health Center in honor of Letcher County coal operator Maynard Hogg and his family. The late Mrs. Bingham was an owner of The Courier-Journal newspaper in Louisville and contributed heavily to the college’s foundation fund before her death. The late Ms. Mason was a celebrated AIDS activist and daughter of the late Rep. Paul Mason of Whitesburg. Mrs. Frazier was a school teacher before her death, and Asher is a Whitesburg attorney who worked diligently to bring the campus to the city. 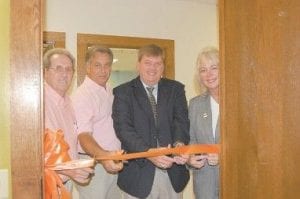 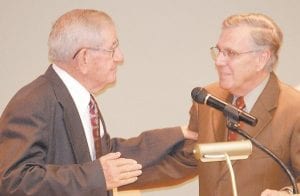 Former Letcher County Sheriff Maynard Hogg is greeted by Southeast Kentucky Community and Technical College President W. Bruce Ayers during a ceremony naming the college’s Allied Health building after Hogg, who became active in the coal business after his term as sheriff ended in the late 1960s, and his family. 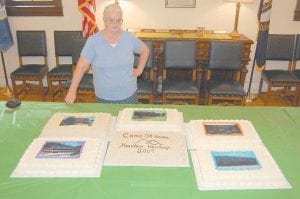 Abbie Wynn, of Racetrack Hollow in Isom, made cakes for the Whitesburg Day dedication events on Sept. 23. Each cake was a different flavor and was decorated with scenes of downtown Whitesburg including Whitesburg City Hall, the Letcher County Health Department, the James W. Bates Bridge, the Letcher County Courthouse and the Harry M. Caudill Memorial Library.