A ‘dream pill’ for lazy people? 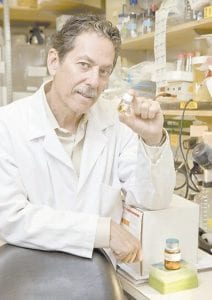 Here’s a couch potato’s dream: What if a drug could help you gain some of the benefits of exercise without working up a sweat?

Scientists say there is such a drug — if you happen to be a mouse.

Just how well those results might translate to people is an open question. But someday, researchers say, such a drug might help treat obesity, diabetes and people with medical conditions that keep them from exercising.

“We have exercise in a pill,” said Ron Evans, an author of the study. “With no exercise, you can take a drug and chemiwhose cally mimic it.”

Evans, of the Salk Institute for Biological Studies in La Jolla, California, and the Howard Hughes Medical Institute reports the work with colleagues in a paper published online last week by the journal Cell.

They also report that in mice that did exercise training, a second drug made their workout much more effective at boosting endurance. After a month of taking that drug and exercising, mice could run 68 percent longer and 70 percent farther than other mice that exercised but didn’t get the drug.

Both drugs have been studied by researchers for other uses. The no-exercise drug is in late-stage human testing by Kenilworth, New Jersey-based Schering- Plough Corp. to see if it can prevent a complication of heart bypass surgery.

Evans noted the drugs might prove irresistible for professional athletes who seek an illegal edge. He said his team has developed detection tests for use by the World Anti-Doping Agency. Evans said he has no financial interest in either drug or the test.

Resveratrol, a substance being studied for anti-aging effects, has also been reported to enable mice to run farther before exhaustion without exercise training. But the drugs in the new study appear to act more specifically on a process in muscles that boosts endurance, the researchers said.

Still, it takes more than just altered muscles to turn a sedentary mouse into a distance runner, Evans said, and “honestly, I just don’t know how that happens. Whether it would happen in a person, I don’t know. I think it’s a small miracle it happened at all.”

In fact, Evans said that when the experiment with sedentary mice was suggested by an outside scientist who was reviewing the lab’s research, “I didn’t think it was going to work.”

The no-exercise drug is called AICAR. Previous experiments suggest that it might protect against gaining weight on a highfat diet, which might make it useful for treating obesity, Evans said. But it would have to be taken for a long time, he said, so its safety in people would have to be assured.

Experts who study muscle agreed that a drug like AICAR may prove useful someday in treating obesity and diabetes. Many drug companies are working on such drugs in diabetes because in animals, AICAR stimulates muscles to remove sugar from the blood, noted Laurie Goodyear of the Joslin Diabetes Center in Boston.

People who can’t exercise because of a medical condition like joint pain or heart failure might also benefit from such a drug, experts said.

But Eric Hoffman of the Children’s National Medical Center in Washington, D.C., noted that AICAR mimics only aerobic exercise, not the strength training that might be more useful to bedridden people or the elderly, for example. He also cautioned that it’s not clear whether the new mouse results can be reproduced in people.

Goodyear said exercise has such widespread benefits in the body that she doubts any one pill will ever be able to supply all of them. “For the majority of people,” she said, “it would be better to do exercise than to take a pill.”