A dreamer picks her horse for the Derby 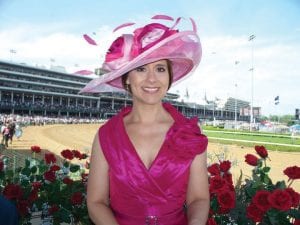 Former Miss Kentucky Nancy Cox will again help anchor WLEXTV’s Kentucky Derby coverage Saturday starting at 8 a.m. So I thought it was only right to ask her

about her Derby pick.

“I did better with Derby picks before I started live coverage. I’ve hit a few winners, but more often than not I’m throwing away tickets like everyone else,” Cox said.

“I’ve followed the Derby trail more closely this year. I keep coming back to the same horses: Classic Empire, McCracken and Always Dreaming. The name always has to feel right to me. That may give Always Dreaming the edge. Because … I am always dreaming!”

Kash Daniel has a lot of lofty goals for himself during his sophomore season at Kentucky and has them posted on his apartment wall so he sees them every night.

He wants to bench press 405 pounds and squat 550. He wants to play on every special team UK has. He wants to start at linebacker even though UK returns linebackers Jordan Jones and Courtney Love, its top two tacklers from last year.

Daniel also wants to make a national name for himself after making 19 tackles in 13 games last year.

However, the former Paintsville High School standout has one other major goal. He wants to have at least a 3.0 grade point average.

“I think if you are a smart athlete in the classroom, then you will be a smart athlete on the field. I think those two coincide,” Daniel said. “I really busted on my aca- demics this semester and I want to keep being strong on academics.”

He now realizes how much he had to learn as a true freshman about playing in the Southeastern Conference after playing for a small high school.

“It is night and day different for me now. That’s why I am looking forward to fall camp already,” Daniel said. “The way I take on blocks is growing. My eyes are growing. My gap responsibilities are growing. I definitely came to the forefront in the spring compared to last fall.

“I think the flow of the game is slowing down and I can read my keys better. You don’t want to get too fast, but overall I am seeing the blocking schemes better and getting in better position.”

Another standout 2016 in-state signee, Woodford County offensive lineman Drake Jackson, was redshirted last year. Does Daniel ever think maybe he should have done the same thing?

“I have contemplated that a few times. I think for me not redshirting has helped me get to where I am right now. I got experience on special teams and experience in some games. I know what speed of games will be like in the SEC,” Daniel said.

He says 15 extra practices UK got in December by getting a bowl bid helped, too.

“It was kind of like spring ball. Three days technique, then prep stuff. Practices helped not just me but everybody, especially those that redshirted or had not played a lot,” Daniel said.

He understands the experience Kentucky returns at linebacker along with the talent of several freshmen players who will add to the mix. But he came to UK to play, not watch.

“You didn’t sign a letter of intent to say, ‘Hey, I’m going to go here and back up for four years,’ ” Daniel said. “That’s a mentality you have to have. Every day you approach practice, you never know when your number’s going to be called and when it is, you better be ready.”

After his proposal to girlfriend Keely Potts on his Senior Night at Kentucky, Derek Willis became a national name. During his autograph tour across the state in April, he was asked often about that proposal.

“We got asked about it every single stop,” Potts said. “We also got a lot of cards from fans and a lot of hugs.”

They have set Aug. 4, 2018, at Heartland Golf Club in Elizabethtown for the wedding. That gives Willis a year to see how his professional basketball career works out.

“ My family owns the golf course with another family,” Potts said. “But it won’t be open to the public. Sorry. So many fans have asked if they could come or if the wedding could be at Rupp Arena. We are going to have to let the fans down on that one.”

But it is not just casual UK fans asking the couple questions.

“Guys have been texting Derek asking if they are going to be in his wedding. He just tells them we have not even had time to think about that yet,” Potts said.

The University of Kentucky always does a spectacular job with the annual CATSPY Awards show and that was no different this year.

It’s a way to recognize special student-athletes and I’m not sure there is a more popular event on campus with the athletes all season.

“I don’t really know who had the most fun because they’re just so many people there,” said Kentucky sophomore Maci Morris. “But I know some of us at my table we’re having some good laughs.”

That included before the event when the basketball team had a photo taken with coach Matthew Mitchell that looked quite a bit different than the normal team picture.

“Personally I love getting dressed up just because there’s not many times I get to,” Morris said. “And it’s really cool to see all the athletes’ transformations from their athletic attire to dresses and heels or suits and ties.”

Paul Thomas of the Gwinnett (Ga.) Daily Post thought Jarren Williams would get a lot of other big-time scholarship offers after he verbally committed to Kentucky in June and told me a “lot can happen between now and February of 2018” with Williams then.

He was right, too, as the Georgia quarterback, the first commit in UK’s 2018 recruiting class, recently decommitted after his latest scholarship offer from Alabama to go along with ones from almost every other SEC school.

“I thought there was always the chance of Jarren decommitting because his ceiling is so high. I felt more and more certain that Kentucky would have a hard time holding on to him as the (2016) season went on,” Thomas said. “He was really dynamic last fall and more and more blue blood football programs have inquired about him with the Central Gwinnett coaches.

“He was really impressive last year. He fit Central Gwinnett’s offense perfectly. He certainly has that dual-threat capability, but he can sling it, too. He was a lot of fun to watch last season.”

Many Kentucky fans expect Williams to go to Alabama like Florida quarterback Mac Jones did after he recommitted from UK’s 2017 signing class.

“I think Alabama is in the mix for sure. I also think Florida State will make a good run at him and if they can get him to camp with them over the summer, a requirement for Jimbo Fisher when evaluating quarterbacks, then that could be where he lands,” Thomas said. “I also wouldn’t count out LSU, Ohio State and anyone else at this point just yet.”

Thomas said there was not a lot of local reaction to Williams’s decision concerning UK.

“It sort of seemed inevitable. Kentucky has continued to struggle and when programs like Alabama, LSU and FSU offer it’s kind of hard to turn that down,” Thomas said.

Willis and Humphries were together last week for a stop at Simpsonville.

Keely Potts, Willis’s fiancee, was with them and shared this story.

“I love the signing tour and the support the players have had and getting to meet the fans. And the players obviously get a percentage of the money they make,” Potts said.

“On the way back to Lexington, we saw a homeless person. Isaac asked Derek, ‘What would you do if I gave him all this money?’ Derek told him he wasn’t sure and asked if he was going to do it. Isaac said, “I think about doing something like that all the time. But that person did not look like he really needed it. But I don’t really need this money and I would do it.’

“I have never seen that from anyone, including Derek. That just shows the type of person and man that Isaac is. Now Derek has actually given the shirt off his back to someone before. We were walking to a football game two years ago when a guy came up and said he liked Derek’s jacket. It was one Derek got from UK, so he gave it to him and made that guy’s day. That’s just the way they are.”

Southeastern Conference basketball has a chance to be even better next year even though Kentucky faces the biggest rebuilding job in John Calipari’s time at UK and South Carolina had major losses on its surprising Final Four team.

One reason is that Missouri figures to be much better with the addition of 6-9 Michael Porter, the top ranked player in the 2017 recruiting class.

“There are not a lot of people like him,” Oklahoma signee Trae Young, a onetime UK recruiting target, said. “He is about 6-10. He can shoot over anybody. Can shoot from NBA range. He can get to the basket, he can post you up, he can score in multiple ways.

“He plays hard on both ends. He is a great defender and will block shots and will get 10 or 15 rebonds in a game. He’s a complete player and there are not many like him anywhere. He changes games in a big way.”

Quote of the Week: “He is at his best in the big games. In championship and big games, that’s when he is always at his best. Mentally, in that atmosphere he is at his best. There is never a moment too big for Jemarl. I am confident no moment at Kentucky will be too big for him,” Earl Watson Elite assistant coach Justin Downer on UK signee Jemarl Baker.

Quote of the Week 2: “His passion for the game is so great. You’ve got to kind of control him a little bit, slow him down. You’ve got to say, ‘whoa’ and not ‘giddy up.’ And I’d rather have it that way,” UK offensive coordinator Eddie Gran on running back Benny Snell.

Quote of the Week 3: “He actually accidentally put my number down as his main form of contact.

“I was getting calls and texts from NBA teams and their people for a while,” Keely Potts on Derek Willis putting the wrong contact number for teams to call.