A fictional look at ‘oppo research’

By WILL LESTER
The Associated Press 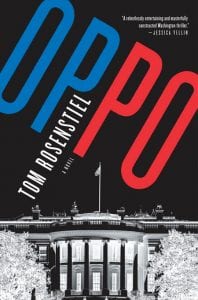 This cover image released by Ecco shows “Oppo” a novel by Tom Rosenstiel.

Investigator Peter Rena and his partner Randi Brooks are taking on the timely topic of opposition research in the new political thriller “Oppo” by Tom Rosenstiel.

The novel looks at the story of Wendy Upton, a centrist Republican senator offered the VP slot by leading presidential candidates from both parties. Very soon, she gets a mysterious threatening call that could derail her career.

She hires Rena, Brooks and their investigative team to find out who is threatening her and what damaging info they have on her. This may seem familiar as the country is going through an impeachment inquiry with opposition research as a central theme.

Rosenstiel was a longtime Washington reporter who has closely followed capital politics as a reporter, researcher and media leader for decades. His novels have followed developments surrounding the search for a Supreme Court justice, a political firefight over a deadly terrorist attack and now, the role of opposition research.

Through the adventures of Rena and Brooks, he tells how these political dramas can play out, with a good eye for Washington detail and characters. “Oppo” has a more linear story line, like his first novel, “Shining City,” about the Supreme Court justice search.

Rena and Brooks need to investigate their own client for any hint of scandal and find several possibilities as they investigate her family background, growing up and raising her sister after the death of her parents and going to college and then joining the military for a time, and they also investigate politicians and other power players who might have a motive to destroy Sen. Upton.

Because his novel introduces numerous characters as the investigators try to determine the source of the threat, careful reading of the introduction of these characters will help the reader follow the narrative.

As the investigators dig deeper in a nationwide search, they find links to murky political figures and sketchy financiers. It’s a reminder that such schemes often involve more layers and complexity than is apparent at first.

Rosenstiel’s fiction aims to offer background and insights on how Washington works in increasingly divisive and tense times through the adventures of Rena, Brooks and company. Political junkies and those who aspire to be should take note.

Will Lester, a political writer for The Associated Press for a dozen years, is an editor in the AP’s Washington Bureau.