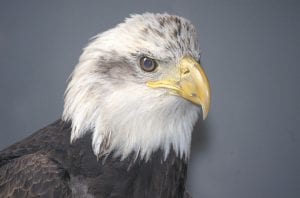 recently moved to a new permanent home at the Letcher County Wildlife Center at the Extension Service office in Whitesburg. Mitch Whitaker, a raptor expert and master falconer, trained in Somerset in preparation for taking the bird, and the 4H Raptor Program, which gives educational presentations throughout the area, paid for a large eagle enclosure with money from the programs. Whitaker said the bird, which will probably be named General Boone, had to have half of one wing amputated after an injury, so it is no longer able to live in the wild. The Wildlife Center got it from the American Eagle Foundation in Pigeon Forge, Tenn., and will use the bird in its educational programs. The bird is four years old, and is still shedding the dark feathers on its head. By age 5, the eagle’s head will be completely white. (Photo by Sam Adams)