A little beer adds a lot of flavor to beef sliders 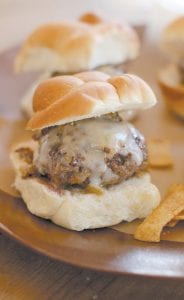 Big provisions are required to watch the big game, and nothing’s more substantial than a burger, even in its mini-form — the slider.

Indeed, if you plan to serve a variety of dishes for the Super Bowl, sliders are more sensible than the full-sized guys. But they happen to be a little trickier to cook than a standard-issue burger. The slider’s size makes it tough to put a nice crust on the outside while ensuring that it doesn’t overcook on the inside.

These sliders are adapted from a burger I used to make at a bar in Ann Arbor, Michigan called the Del Rio — my first job as a cook. Dubbed the Det Burger, this marvel was dreamed up before I landed at the Del Rio by a cook named Bob Detweiler, who baptized the creation after himself. The heart of the original version was a quarter-pounder topped by “the Det mix” — canned mushrooms, canned olives, grilled onions, freeze-dried green peppers and slices of cheese.

But there also was a secret ingredient: beer. The Det Burger was steamed in beer. If it wasn’t quite “the burger that made Ann Arbor famous,” it was undeniably a citywide favorite.

A generation later, I assembled the same winning combo of ingredients — though in a fresher form — and then focused on the cooking process to make sure that these mini-burgers ended up juicy and crusty. There are a few key points to preparing Beer- Steamed Cheese and Mushroom Beef Sliders.

First, the sliders need to be about 3/4-inch thick, not only so they don’t overcook, but also so you can fit all of them at one time into the skillet. Second, the skillet needs to be large, a 12-incher. If you don’t have a skillet that big, use two smaller ones and cook six sliders in each. And third, whichever skillet you use, the oil must be heated until it’s almost smoking. At the start, you want the burgers to sear, not steam, which is what will happen if the pan isn’t hot enough.

At first, the sliders will be crowded together in the skillet, but they’ll shrink down as they cook, giving off fat and juices in the process. You deglaze the pan with beer, of course, which mingles intimately with the fat and juices released by the burgers to create a delectable pan sauce.

I recommend spooning some of this liquid onto the buns before sliding in the burgers, but my son proposes a more extravagant way to roll: pour the sauce into ramekins and invite your guests to dunk their sliders into it between bites. Whatever happens onscreen, you’ll be winning at home.

the pan, the mushrooms and a
hefty pinch of salt. Cook, stirring
occasionally, until the liquid the
mushrooms give off has evaporated, about 5 minutes. Transfer
the mushrooms to the bowl with
the onion. Reserve the skillet.
Add the olives and chilies to the
mushroom mixture and stir well.
Set aside.
Return the skillet to high heat.
Add the remaining tablespoon
of oil and wait until it is almost
smoking. Meanwhile, season the
sliders on one side with salt and
pepper. When the oil is hot, add
the sliders, seasoned side down
(it will be a little crowded in the
pan), and cook them until they
are just browned on the first side,
about 2 minutes. Sprinkle the top
side of each with salt and pepper,
turn the sliders over and cook for
another 2 minutes.
While the sliders are browning,
top each slider with a heaping teaspoon of the mushroom mixture,
dividing all of the mixture among
the sliders, then place a piece of
cheese on top of each. Quickly
pour the beer into the pan, all
around the sliders, cover the pan
and steam for 2 minutes.
Turn off the heat and let the
sliders sit in the pan for another
minute to let the cheese melt
completely. Spoon some of the
liquid in the skillet onto the tops
and bottoms of the buns, transfer
the sliders to the buns and serve
right away. Makes 12 sliders.