A loving tribute To an outstanding and intelligent friend 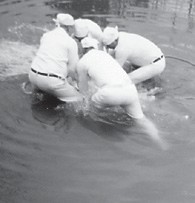 The family and friends of Steve Hampton

Steven Brian Hampton, the second of four children to grace the home of Relon and Adeline Hampton, was born Feb. 26, 1971. Steve, as his friends and coworkers called him, was joy to be around. He was always jolly, always trying to make others happy too. He never met a stranger and loved everyone and always tried to be a friend to everyone he met. He was very sensitive and his feelings were easily hurt, often to the point of tears . . . the latter years of his life he followed the examples set forth by his father, on Old Regular Baptist Minister. No matter how tried he was from working in the mines, he always found a little time to spend with his father, taking him on hunting and fishing trips, or just sitting around talking with him, or tinkering with something. Steve had a special bond with his father and took heed to the examples set forth by him, and in September 1997, at baptism at Carr Creek Lake, having gotten his house in order, he joined the Dixon Memorial Old Regular Baptist Church. He made a VOW to GOD that day, and in October 1997, he lived up to that Vow by being buried in the Liquid Grave, following a commandment of God. We are so proud of him for following God’s commandments and giving us the hope that he would eventually follow another of his father’s examples and become one of God’s teachers, by becoming a Preacher of God’s word. But he didn’t get the chance, because his life was cut short on Friday night, December 14, 2012. We didn’t see him become a preacher, but we look forward to standing beside him when we all stand before God’s Mighty Throne, and be Judged for the Deeds done in the flesh.