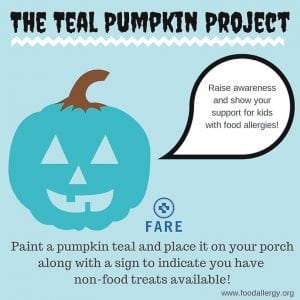 Fifteen million Americans including one out of 13 children have food allergies, according to Food Allergy Research & Education (FARE).

When loading your plate with side dishes and desserts at potlucks and birthday parties, do you think much about what ingredients are in those casseroles and cookies?

As a parent of a child who is allergic to peanuts, all tree nuts and coconut, it is vital to know what is in that cookie. I can’t let my guard down. One slip and my son could end up in an emergency room again.

Fifteen million Americans are estimated to have food allergies, according to Food Allergy Research & Education (FARE). One out of 13 children are allergic to some type of food, whether it is peanuts, tree nuts, coconut, eggs, wheat, soy, fish, shellfish or gluten, according to FARE.

Between 1997 and 2011, the number of children who have food allergies increased 50 percent, according to a 2013 study by the Centers for Disease Control and Prevention.

My husband, Derek, and I have taught our eight-year-old son, Grant, to be vigilant and proactive. He knows not to trade treats with his classmates at snack time. He knows to ask if he is unsure what is in a dessert, but the best method is to avoid the food in question. 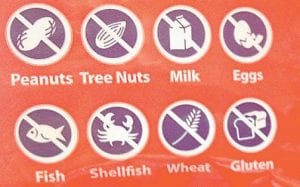 On the back of a bag of Dum Dum suckers are pictures of eight food allergens with a line across each allergen.

If we plan to attend potlucks, I bake cookies or cupcakes that Grant can enjoy. I keep a batch of cupcakes in the freezer for when a classmate brings birthday cupcakes. Every couple of months I bake a new batch. These emergency cupcakes come in handy.

We have attended countless birthday parties and gatherings where we don’t even look at the dessert table. It’s just easier and safer. We also avoid bake sales.

Dodging foods containing peanuts, tree nuts and coconut can be a challenge. So many delicious desserts and dishes call for these ingredients and it isn’t always easy to spot the nut in the dessert. If a cashew is pureed in a cream sauce, it is near impossible to detect the tree nut by sight alone.

We recently attended a party that had those peanut butter blossom cookies with Hershey’s Kisses on top. Unless you have ever made these cookies, you might not know just by looking at them that they contain a good amount of peanut butter. I quickly pointed to the blossom cookies and notified Grant.

Those scrumptious no-bake cookies that are chocolate colored are also made with peanut butter.

Thirteen-year-old Natalie Giorgio, of Carmichael, Calif., had a peanut allergy. She was cautious about what she ate. While at a summer camp event in June 2013, Natalie took a bite of a Rice Krispies treat, not knowing it contained peanut butter. Realizing something was wrong, she spat out the food. Although Natalie’s father administered three epinephrine autoinjectors, she died from anaphylactic shock and cardiac arrest.

One with food allergies can never be too careful.

I picked Grant up from daycare one day when he was two and I noticed a rash on the back of his neck. I called the daycare and asked if he had eaten anything different that day. It was peanut butter. I took him straight to see his pediatrician.

The daycare administrator placed a note on the refrigerator reminding the center’s staff not to give him peanut butter.

More than a year later, he ate a small bite of peanut butter on a cracker at daycare and this reaction was worse than the first. His eyes swelled shut and his face turned shades of red and purple. Daycare staff rushed Grant to the emergency room. Derek and I got to him as quickly as we could. He looked pitiful and as parents, we were scared. The ER doctor gave him some Benadryl and told us that with each encounter, the reaction will be worse. We don’t want to experience worse.

Someone is taken to an emergency room with food allergy reaction every three minutes, which adds up to more than 200,000 ER visits each year, according to FARE. Reactions vary from mild to death.

After Grant’s visit to the ER, our family doctor recommended an allergy doctor and Grant was tested for allergies. Five years later, Grant still goes to the same allergy doctor and takes allergy medicine daily. Wherever we go, we take EpiPens with us.

We have adjusted to a lifestyle of keeping Grant away from harmful foods. As tasty as peanuts and tree nuts can be, Derek and I de- cided that if Grant can’t have certain foods then we won’t eat them either. We just don’t have anything in our cabinets that he could get sick from eating. If Grant can’t have a Nutter Butter then I don’t think it would be nice for me to eat those yummy cookies in front of him. Plus, I want to kiss my son.

Reading labels and letting people know Grant has food allergies are vital in keeping him safe. “Processed in a facility that may contain tree nuts or peanuts” is listed on many boxes and packages found at grocery stores. Mistakes happen and a peanut M&M could possibly end up in a bag of plain M&Ms. If the wrong person got a hold of that bag, it would be dangerous.

What are the chances that could happen? A few years ago, I bought a chocolate chip cookie at a restaurant and a peanut was accidentally baked in the center of it. When I was pregnant, I ordered a chocolate milkshake and I was served a peanut butter milkshake. Mistakes happen.

I may come across as too protective, but if I let my guard down and a peanut gets past me and Grant eats it, he could be in serious trouble. It’s worth taking a few extra minutes to read food labels.

West Whitesburg Elementary School and several other schools in the district are designated as peanut-free schools in an attempt to decrease the chances of food allergy reactions. Teachers and parents of Grant’s classmates are cautious and will call or send a text to ask me questions. I appreciate that.

With Halloween around the corner, friends want to know what kinds of sweets are okay for Grant to eat. Basically, the only candy bar Grant can eat is a regular size, plain Hershey bar, not the mini, fun size or king size. Hershey Kisses are fine, but not the seasonal ones.

Seasonal candies such as candy corn, candy canes and Valentine hearts often contain the disclaimer that the candies are processed in a facility that may contain tree nuts or peanuts. Jelly Belly candy corn and Spangler candy canes are nut free. Hershey’s makes chocolate-coated candies called Hershey-ets at Christmas, Valentine’s Day and Easter that are similar to M&Ms and are nut free.

In the last few years, some companies have started putting nut free labels on candy packaging.

Last Halloween, FARE initiated the Teal Pumpkin Project to raise awareness of food allergies. Teal pumpkins were placed in front of houses across the nation on trick-or-treat night letting people know that the homeowners support children with food allergies and that in addition to candy they have bracelets, stickers or other non-food items available for trickor treaters upon request.