A nation of sleep zombies? 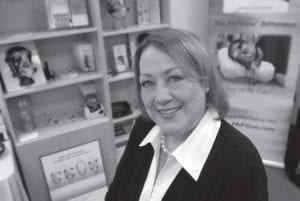 Sleep expert Tracy Nasca, who has suffered from sleep apnea most of her adult life, founded the online company Talk About Sleep Inc. which helps people who suffer from sleep apnea. (AP Photo/Dawn Villella)

As a young mother in her twenties, Tracy Nasca, now 54, was a “total zombie.”

She lived in a twilight state of fatigue, exhausted and confused. She had no short term memory, forgetting everything from evening plans to entire phone conversations. Her school-age children cooked themselves meals while she struggled to get out of bed. Eventually she had to quit her job as a florist after she spent too many afternoons napping on the floor next to the refrigerators of roses.

After years of exhaustion, Nasca’s doctors found a diagnosis: She was massively, chronically sleep deprived.

And according to sleep experts, many Americans are headed for the same fate.

“All the recent surveys and studies show that the majority of Americans are sleeping far less than we need to to be healthy and functional,” said Dr. Neil Kline, a sleep physician with the American Sleep Association.

According to the Centers for Disease Control and Prevention, nearly 30 percent of Americans are habitually getting less than six hours of sleep a night – far less than the recommended seven to nine hours – and an estimated 50 to 70 million people suffer from sleep disorders or constant sleep loss.

The worst part is, we’re exhausted and many of us don’t even know it, said Dr. Meir Kryger, chair of the National Sleep Foundation. “A lot of my sleep deprived patients think this is just how life is,” he said.

So if you think you’re not getting enough sleep, you’re probably right. And if you need more proof, Kryger offers this test: “If you need a cup of coffee to feel alert, there’s a problem.”

But how did we become a nation of bleary-eyed sleepwalkers, swigging giant lattes to make it through the morning? Experts blame a culture of overstimulation: As Americans become increasingly addicted to technology, most people are up late into the night texting friends on cell phones, flipping TV channels or surfing the Internet.

Americans also are working much longer hours and commuting farther than they did in decades past. Kryger said many of his patients spend hours every week driving to work, chunks of blank time that should be used for sleeping or “generally living life.”

Increasing portions of the population are working nontraditional hours – as medical professionals, long-haul truckers, even cashiers at 24-hour superstores – further threatening a good night’s sleep. The earliest risers aren’t necessarily shift workers, either: They’re students. As schools move start times to as early as 7 a.m. to accommodate after-school sports and busing schedules, habitually tired teenagers are joining the ranks of baggy-eyed adults by compensating for lack of sleep with Starbucks and energy drinks.

But the country’s chronic lack of sleep has more serious implications than a nationwide caffeine addiction, Kline said. Insufficient sleep is associated with a number of diseases and conditions, such as diabetes, obesity, and depression.

Sleep deprivation also can be extremely dangerous: a high percentage of road accidents are due to daytime sleepiness, and largescale mistakes like the Challenger explosion, the Exxon-Valdez oil spill and Chernobyl nuclear disaster have been associated with fatigue, Kline said.

Luckily, sleep deprivation is completely reversible. After receiving treatment for sleep apnea, a sleep disorder that kept her from fully falling asleep, Nasca’s decade long fog of zombie-dom lifted. She now regularly sleeps eight hours a night. Refreshed and rested, she now devotes her life to helping others get as much sleep as they need through her Web site talkaboutsleep.com.

To get a good night’s rest, most sleep experts recommend a set of sleep rules, called “sleep hygiene.” Keep your bedtime and wake time on a consistent schedule. Make sure your bedroom is cool, dark and quiet. Exercise every day, preferably at least six hours before going to bed. Avoid eating a large meal in the late evening, and limit caffeine and alcohol intake. Build in 15 minutes of “quiet time” at the end of the day to help calm racing thoughts.

If you’re already doing all that and still toss and turn all night, you may have a bum mattress, said Karin Dillner, spokeswoman for the Better Sleep Council. “Most people aren’t even looking at something as simple as a mattress for their quality or quantity of sleep, but that’s often the problem,” she said.

The Council recommends evaluating your mattress every 5-7 years for comfort and support, and if you’re waking up with aches and pains, or noticing that you sleep better at a friend’s house, it might be time to invest in a new one.

Your partners on that mattress may also be keeping you awake. Often a needy pet or a snoring, snuffling spouse can ruin a good night’s rest, Kryger said.

“The key is to banish all distractions,” Kryger said.

Of course, all these tips are “easy to say but hard to actually fit into your life,” Nasca said, “because we’re busy and we naturally tend to put sleep last on our to-do list.”

However, truly devoting yourself to getting enough sleep is always worth it, she said. “Sleep is an absolute biological need. Nothing can replace it, and nothing else can make you feel so fantastic.”