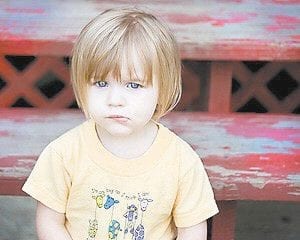 This photo taken of Emily Enfusse at her grandmother’s house in Craft’s Colly resulted in Emily being among only 20 babies and children still in the running as a new “face” of Gap.

A three-year-old Whitesburg girl could become the next face of a major baby clothing chain.

Emily Grace Enfusse, daughter of Michael and Melissa Enfusse, is one of twenty babies and children chosen by Gap Inc. from a pool of nearly 900,000 entries. Melissa Enfusse submitted a photo of Emily siting on the porch at the Craft’s Colly residence of her grandmother, Margaret Enfusse.

Four winners of the contest to become the next faces of babyGap will be determined by Internet voting. Voters can log onto www.gap.com/castingcall to pick their choice. People can vote once a day, every day, from today until Dec. 21.

Melissa Enfusse said she had seen the Gap ads in previous years and decided to enter Emily. When she learned that Emily was a babyGap finalist, she was “floored” and “was literally shaking” when she called to tell her husband, Chief Deputy Letcher County Jailer Mike Enfusse, to share the news.

“I just think it is neat that someone from a little town gets to do something like this,” said Melissa Enfusse.

The four contest winners will be featured in store windows from coast-to-coast and will receive other incredible prizes including a year’s supply of clothing from babyGap or GapKids and $450 worth of photo gifts from Snapfish.

After being selected as finalist, Emily was flown to San Francisco to participate in a professional photo shoot in November. She also received prize packages including a $300 gift card from babyGap as well as prizes from Snapfish, an on-line photo service.

“We are so excited about this year’s Casting Call contest and congratulate all our finalists, including Emily”, said Pam Wallack, president of babyGap, GapKids and GapMaternity. “This year set a new record for the number of entries in the contest and, while it’s not an easy feat to narrow down the finalists to the top 20, we are confident that all of the finalists would do a great job representing the babyGap and GapKids brands.”