A no-salt diet is impossible 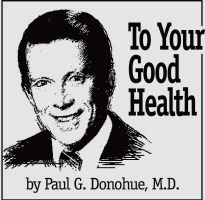 DEAR DR. DONOHUE: My son, at 40, was found to have dangerously high blood pressure. My husband died at age 41 of a heart attack. He also had very high blood pressure. It is a family condition. My son was told to cut out all salt. Is that necessary? Is it possible? His doctor says no salt is allowed. How many milligrams is it reasonable to eat in a day? There’s almost no food without some salt in it. – J.B.

The recommended daily allowance for salt has been 6,000 mg – 6 grams – (2,400 mg sodium, or 2.4 grams). New recommendations have lowered it to 3,750 mg salt (1,500 mg sodium). That’s a pretty low-salt diet, one that can aid in decreasing blood pressure. One teaspoon of salt is 6,000 mg. You should eat only half a teaspoon. That’s the total salt intake – including the hidden salt in foods like bacon, sausage, ham, potato chips, pretzels, pickles, olives, sauerkraut, frozen dinners, canned soups, many canned vegetables, bakery products and on and on. Don’t add salt in cooking or at the table.

People’s taste gradually comes around to enjoying food without salt. If your son doesn’t reach that point ever, he can use salt substitutes. They replace sodium with potassium. Some examples are AlsoSalt, Nu-Salt and Morton’s Salt Substitute.

His daily diet should include seven servings of whole grains (bread, pasta, cereal), five servings of vegetables, five fruit servings, a reduction in meat intake and consumption of low-fat or fat-free dairy products.

DEAR DR. DONOHUE: My teenage granddaughter is staying with us for two months this summer. We live on a lake, and she’s an accomplished swimmer. She swims for hours every day and has quite a tan. She also has white spots on her shoulders and neck, and I think they’re spreading. They don’t bother her. What is this? – C.S.

ANSWER: Your description points to tinea versicolor, a fungal infection. It causes pigment making cells to shrivel. Selenium sulfide is a lotion applied to the skin, left on for 10 minutes and then washed off. It works, and it’s cheap. You apply it for seven days and thereafter once a month to prevent a return. The white spots don’t immediately tan again. It takes time for the pigment cells to recover.

Dr. Donohue regrets that he is unable to answer individual letters, but he will incorporate them in his column whenever possible. Readers may write him or request an order form of available health newsletters at P.O. Box 536475, Orlando, FL32853-6475.