‘A normal kid’ who can really shoot 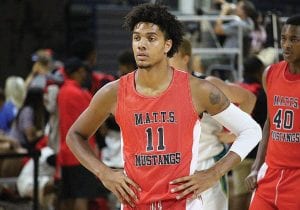 Dontaie Allen likes interacting with younger kids and hopes he can be a role model for even more once he gets to Kentucky.

Kentucky signee Dontaie Allen knows shooting is what he does best — and what Kentucky coach John Calipari obviously liked about the 6-6 Pendleton County senior.

“I think I can drive, too, but I would probably give a nod to shooting as my best ability,” said Allen. “I do also think I am an underrated passer. I really like passing and even though I shoot a lot I can still get the team involved and do the right things for the team. Defensively I can get down in a stance and hold my man and get blocks off the ball.”

So what might be one thing that Kentucky basketball fans — or fans who will see him play at the Marshall County Hoopfest Dec. 1 — don’t know about him that he wishes they did?

“I am just like a normal kid. I really love cereal. I play video games. I hang out with friends. Watch movies. Pretty much anything a normal kid would do. I know I play basketball a lot, but I am still a normal kid in every way,” Allen smiled and said.

He also has a favorite subject that might surprise you.

Pendleton County does not have a lot of distractions for a high school student. Allen says that has been a plus for him.

His success has already made him a role model for youngsters in his home county and he hopes that reach increases when he gets to Kentucky.

“I have kind of seen a glimpse of it already with kids just hitting me up on my Instagram asking for advice on tryouts, drills to do. I think that is good, though, because I can talk to the younger generation and let them know things that maybe I didn’t know but now I do so I can share with them,” Allen said.

He knows he likely might get asked to sign a lot of autographs or pose for pictures with fans at Hoopfest.

“For sure I will like that,” Allen said. “It is definitely going to be a fun ride this season with UK fans coming out to watch me. Growing up a Kentucky fan, I always watched Darius Miller, Anthony Davis, John Wall. Those were the ones I really liked. Darius is someone I always looked up to with him being from Mason County and the 10th Region like me. That was really big to me.”

Could that extra attention put pressure on him, especially with Pendleton having to replace so many players off last year’s team?

“I feel like it can be both pressure and no pressure at the same time. It will only be good pressure if I handle things right,” he said. “I am still going to Kentucky but I still want to have a good senior season with my team. It could go both ways but I really think it is going to be a lot of fun.”

He says getting Pendleton County to the state tournament would “top off everything” about his high school career.

“Every since I started playing high school in eighth grade, I have always wanted to go to the state tournament. It would mean a lot to do that this season. It would be really big,” Allen said.

As big as him signing with Kentucky, something no other Pendleton County basketball player had ever done?

“I think when I committed to Kentucky it was just like very big. Everybody knew about it. Everybody was congratulating me,” Allen said. “Going to state, I remember it was big when Coach (Keaton Belcher) went in 2005. I went to a game or two that year but I was too young to really remember other than it was a big deal and I would love to help make it happen here again for coach Belcher and our whole community. It would be crazy.”

Kentucky ends its football season Saturday night at Louisville in a game that might be as big as any game coach Mark Stoops has had in his UK career.

I know that doesn’t sound right considering UK has two SEC road wins, including the streak-busting victory over Florida, along with three home SEC wins this year and will be going to its third straight bowl game. However, the 24-7 loss at Tennessee was a blow for many UK fans and a loss to a Louisville program in disarray would wipe out most of the goodwill Stoops has earned the last three seasons even if the Cats are 8-3 — the first time UK has won eight games in the regular season since 1984.

Harrodsburg’s David Hopewell, a starter on UK’s 10-1 team in 1977, might be the biggest UK football fan I know. However, the loss at Tennessee hurt him deeply because of UK’s perceived lack of effort and focus.

“I’m so tired of losing, so tired of excuses. What in the world is going on? I just don’t understand how a team is not fired up, ready to play with excitement and a sense of urgency?” Hopewell said. “There was so much on the line, a 10-2 season with a New Year’s Day bowl! If I were a player today I’d be practicing for hours, studying film constantly, until we got it right.

“So disturbing and disappointing. First class athletes are always prepared mentally, emotionally and physically. They make something happen, find a way to win, do everything in their power to win the game. The players and coaches had the chance of a lifetime to escalate Kentucky football to a top-notch program. This state would go crazy if we had a powerful, consistent, gold standard program. It could be done here, why isn’t it? It’s a shame.”

He’s already made his decision not to follow Kentucky to a bowl game this year, something he always does. But I think that just shows the urgency Kentucky needs to display at Louisville Saturday and make sure a season that has had so many good things doesn’t end up being remembered for losses at Tennessee and Louisville.

Junior running back Benny Snell seems to understand that. It’s a given he’ll announce when the season ends that he’s heading to the NFL. He’s 207 yards away from becoming UK’s all-time leading rusher with the Louisville game and bowl game left to get the needed yards.

“When I watch Ohio State and Michigan or Kentucky and Louisville, it doesn’t matter. It really doesn’t matter who’s got what going into the game — the rankings or how good you are. It’s a rivalry,” Snell said after scoring twice against Middle Tennessee. “The teams are going to be out there, the best team is going to win.”

Kentucky fans just hope that is UK and not Louisville, which has lost eight straight games after its 52-10 loss to North Carolina State last week. The Cardinals have given up 38 or more points in the last six games, including 239 in the last four games.

In case you missed it, Calipari was honored by the Springfield Rotary Club at its annual Service Above Self Luncheon at the Naismith Memorial Basketball Hall of Fame last week.

The club cited as one reason for honoring the UK coach the fundraising he did after a massive earthquake devastated Haiti in January 2010 in his first season at Kentucky. The effort generated more than $1 million in relief. He later held similar events after Hurricane Harvey and Superstorm Sandy. Calipari and the Kentucky program have annual involvement in the Miracle League, One Parent Scholar House of Lexington, Samaritan’s Feet, Starkey Hearing Foundation, St. Jude’s Children Research Hospital, Team Focus, and the Urban League of Lexington-Fayette County.

Calipari also has former UK players in the NBA giving back.

“It makes me feel good that we’re moving guys in the right way,” Calipari said. “Our guys understand being involved. For the NBA Community Assist Award, you can’t just give money; you have to be involved.

“I was involved when I was at Memphis and I was involved at Massachusetts. But we didn’t have as much nor did I have the platform or the bully pulpit like I do here. But it all comes back to paying it forward and being a good steward of what you have.”

How much of a difference do upgraded facilities mean to a football program? That’s the question I posed to former All-SEC tight end Jacob Tamme, who played nine years in the NFL after his Kentucky career ended.

“I think it matters. Would it have made a difference in the way I played? No, I don’t think so,” Tamme said. “Maybe there is some new technology in there from an athletic training standpoint that could have helped. I don’t know about that.

“The fact we have a fancy building helps recruiting now, but not necessarily the guys playing there now. In the NFL, there are not many fancy facilities. They don’t recruit. They recruit with contracts, dollar bills. Colleges recruit with facilities, and if you bring a kid in you want to impress him and what we have now does impress and should get any recruit’s attention.”

The problem is that every Southeastern Conference school seems to just keep spending more and more to continually upgrade facilities.

“That’s just part of SEC football and why it is so important, and probably so hard, to keep raising all the money you need just to keep up,” Tamme said.

During his coaching career at Kentucky, Tony Franklin thought he knew everything about teaching a receiver how to run an option route.

“I used to think I was the greatest option route coach there was,” Franklin, now the offensive coordinator Middle Tennessee, said. “Then Anthony White left and I knew it was him, not me.”

“He was the best option route runner in history,” Franklin said. “Since I left Kentucky, I have not had anybody that could run the option route like him. He just always knew where to go and he never missed a ball. I love that kid.

“I have been at a lot of schools (Troy, Auburn, Middle Tennessee, Louisiana Tech and California) since I left Kentucky and I talk about him at every school. I use him as the perfect option route runner and I am still looking for somebody that can make me look as good as a coach as he did.”