I know Hillary Clinton. She is a friend of mine. I have always respected her — and never more than during the closing days of this campaign, when she displayed a level of grit and determination I have rarely seen in any politician, male or female, Democrat or Republican.

Hillary is many things: smart, strong-willed, disciplined, determined and, yes, ambitious. She wanted to be president; I assume she still does. It’s not the sort of ambition that, once you admit to it, get close to it, get a taste of it, is easy to give up.

Pollyanna I’m not. There are many who would like to see such a fight, especially in light of Obama’s failure to open up the commanding lead that many people, both supporters and opponents, as well as media types, thought he would have by now. It would be good for ratings, if nothing else, to see some kind of brawl at the convention. There are many Clinton supporters who would relish such a fight, particularly given what they view as the Obama camp’s decided lack of enthusiasm in helping Hillary pay off the debts she owes not to herself and not to her former campaign strategist Mark Penn, but to small vendors across the country whose votes the Obama campaign has every reason to want. 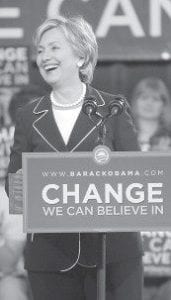 I know many Clinton supporters — delegates, organizers, old friends — who thought the Obama campaign would have reached out to them by now, brought them in, made them feel welcome and wanted, but it hasn’t happened. I get plenty of e-mails on this topic. I don’t have any answers. The Obama campaign did an event in Washington with 50 top Hillary insiders. Apparently, it went well. But there are plenty of folks outside the Beltway who didn’t hold top jobs in the campaign but are key players in their own states, and their phones haven’t rung.

Asked on his campaign plane about the Clinton supporters who haven’t signed on with Obama, who are still voicing disappointment about how things turned out, Obama responded: “We’re not talking to those people, we’re talking directly to the Clinton campaign people and staff.”

They need to talk to those people. They need their help to win. Many of them are not happy right now.

But they are not going to ruin Obama’s convention. They are not looking to walk out. They do not want to make John McCain president. The last thing they want is to be blamed or to have Hillary blamed for Obama’s defeat. That would be a disaster all around.

When asked whether placing Hillary’s name in nomination and having a roll call vote, which he would then win but (maybe) only narrowly, would be “cathartic” for the party, Obama rightly told reporters “catharsis” is not the purpose of a convention. “I don’t think we’re looking for catharsis. I think what we’re looking for is energy and excitement.”