A perfect setting for Death Cab 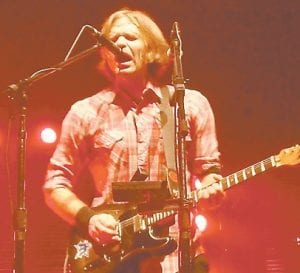 Death Cab for Cutie’s Ben Gibbard performed on a cool and rainy night at the outdoor PNC Pavilion in Cincinnati recently.

A cold breeze swept through Cincinnati on September 30, chilling the city as the sky began to darken and drizzle rain. While it was getting cooler by the minute, people were starting to line up at one of the city’s premiere venues, the PNC Pavilion. The people — most of whom were wearing thick winter coats and packing umbrellas — were here to see the band Death Cab for Cutie. The crowd knew the gloomy atmosphere would be welcoming for the Seattle indie rock quartet, and it was, creating a concert so intimate that it sounded as if Death Cab were playing for only their family and closest friends.

Kicking off the show was fellow Seattle band Telekinesis, a trio consisting of a guitarist, a bassist, and a drummer who impressively took on the task of lead vocals as well. The band’s members are good friends of Death Cab for Cutie and have recently received publicity for their latest album Twelve Desperate Strait Lines. Just a mere week before joining the Death Cab tour, they played for Late Night host Jimmy Fallon. Lead singer Michael Benjamin Lerner expressed his sincere gratitude to the headlining band, explaining that this was the first show Telekinesis had opened for Death Cab. He also thanked Death Cab drummer Jason McGerr, who taught him how to play the drums.

As the temperatures continued to plummet, Death Cab for Cutie took the stage. As the audience eagerly waited for front man Ben Gibbard to take the stage and start singing his sweet melancholy vocals, the rest of the band — Chris Walla on lead guitar, Nick Harmer on bass guitar and McGerr on drums — were already in place. When Gibbard walked on stage he greeted the crowd as if he were casually meeting an old friend.

Death Cab started their set by playing older songs including “I Will Possess Your Heart,” a famous song released in 2008 and well known for its four minute and thirty second opening instrumental. Three minutes into the instrumental, the crowd was about to die of anticipation and pleading to hear Gibbard’s voice. Finally after the instrumental was over, Gibbard eased into his lyrics. Next on the set list were songs including “Crooked Teeth” from 2005, “We Laugh Indoors” from 2001, and “ Photobooth” from 2000. After seven songs the lights grew even darker and the crowd went silent. Then the heart-wrenching drumbeat began, leading the band into the song “Grapevine Fires.” The audience that had been previously silenced in awe began opening their mouths to join in with Gibbard as they sang the song’s meaningful lyrics.

The band continued to play, adding to what would end up being an impressive 24-song setlist that also included songs such as “I Will Follow You Into The Dark,” “ You Are A Tourist,” and “Soul Meets Body.” Death Cab seemed to do the impossible — make the crowd completely forget about the cold weather.

After finishing their song “Marching Bands of Manhattan” the group left the stage but quickly came back on for an encore consisting of four songs, the first being “Your Bruise.” The second song of the encore was the band’s latest love song, “Stay Young Go Dancing,” and for the their third song the band chose their largely known but rarely played hit “The Sound of Settling” almost as if they wanted to reward and thank the crowd for bearing the cold temperatures of the night. When the song was finished and the crowd had quieted down from their buzz of initial shock when they learned that “The Sound of Settling” had been added to the show, Gibbard thanked the crowd by saying, “I know that it is cold out here but we are so grateful that you guys are all out here, nestled together, listening to us play.” And with that Death Cab played their final song, “Transatlanticism,” leaving the audience speechless at how truly spectacular the show had been despite the fact that the weather was against them.

• “Underneath the Sycamore” — Death Cab For Cutie

To keep in touch with all the latest music news visit: http:// xfilesmusic.blogspot.com