A piece of roadside history is back up in Whitesburg 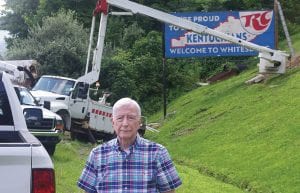 Ronnie Bentley, 81, who along with his father owned the RC Bottling plant, watched one of his old company’s iconic signs go back up on the Whitesburg Bypass last week. The sign, which says, “We’re proud to be Kentuckians,” is not as famous as another RC billboard that proclaimed Whitesburg to be home to “1,534 friendly people, plus 2 grouches.” Bentley, laughing, declined to say who the grouches were. (Photo by Sam Adams)

There was a time when everyone around knew that Whitesburg was populated by a bunch of friendly people, and two grouches.

The Royal Crown Cola sign at the edge of town told them so.

Perched on the peak of Tunnel Hill, next to the hospital driveway, the red, white and blue sign was mildly famous. Before that, it was a one-grouch town, but the population is ever changing and the sign had to be updated.

This piece of roadside history is going up again, rescued from rot and indignity by the City of Whitesburg and replicated or repaired by the Letcher County Tourism Commission.

“The wind blew it down, and the city picked it all up and turned it over to tourism,” City Manager Chris Caudill said.

The RC sign memorializes a time when Whitesburg was a boomtown of sorts, home to two soft-drink bottling companies and multiple new car dealerships. One RC sign is now a “ghost sign” on the side of the Kentucky Mist Distillery on Madison Street. It labels the building as the KYVA Motor Company and advertises RC at the same time. 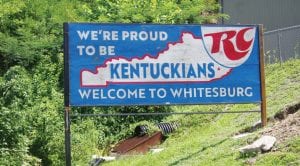 A reproduction of an antique R.C. Cola billboard placed on the Whitesburg Bypass will serve as a directional sign, telling drivers about tourist opportunities downtown.

The city, which owned the building, turned it over to Kentucky Mist as a development incentive. One of the conditions was that the RC/KYVA sign stay.

The first of the billboard signs to be reinstalled found a home Friday beside the Whitesburg Bypass, in front of Childers Oil’s tank shops. That sign doesn’t list the population or the number of grouches, but proclaims that Whitesburg residents are “Proud to be Kentuckians.” Missy Matthews, chairperson of the Letcher County Tourism Commission and CEO of Childers Oil, said it’s a reproduction of the original sign.

“The original was too brittle to put up, so we saved it and we’re going to use it in a visitors center, or when we find a place with a wall big enough to hang it,” Matthews said.

She said she had employees track down a retired sign painter who reproduced the old sign in the old way, painting it freehand rather than using vinyl or stencils. After he was finished, he distressed the sign to make it look authentic. Even though the sign is up, it’s not finished. Matthews said another panel will be installed under it with the words “Distillery, restaurants, live music, museum, shopping, farmers’ market,” and an arrow telling drivers to turn at the next traffic light. The same kind of panel will be installed under the other sign when it goes up on the east end of the bypass.

The signs are being paid for by proceeds from the sale of T-shirts featuring an image of the grouch sign, and from donations.

Ronnie Bentley, whose father, Bradley, partnered with Ray Collins to buy the RC Cola Bottling Company in 1947 and move it from Neon to Whitesburg, stopped his car on the side of the road Friday morning to watch a piece of his family’s history take its place in the community again. Collins, who later sold his interest to Bradley Bentley, put up signs everywhere, Ronnie Bentley said.

Now 81 years old, Bentley and his father sold the plant in 2011, 21 years after it stopped bottling drinks at the plant rather than convert from the old-fashioned glass bottles to the plastic bottles used today. At its peak, the plant shipped out up to 2,500 cases a day of 12-ounce drinks, and 2,000 a day of 16-ouncers. It bottled RC Cola, Diet Rite Cola, Nehi Peach, Nehi Grape, Nehi Orange, Nehi Root Beer, Upper 10, and RC 100.

Keurig Dr. Pepper now owns RC, and the old Whitesburg bottling plant at Ermine is a construction company office. Some of the drinks, such as Upper 10, can no longer be purchased in the United States.

That was the sign that was hiding the “Proud to be Kentuckians” sign, and was blown down during a storm in April 2018. The repaired sign will be placed across the KY 15 Bypass from Whitesburg Hospital, on the other side of Tunnel Hill from where it was originally located. The bypass signs will join another R.C. sign across the river from Southeast Kentucky Community and Technical College’s Whitesburg Campus. That sign, placed when the college was still the Coca- Cola Bottling plant, urges kids to stay in school. The college building still bears the cut stone Coca-Cola logo with a bottle on either side across the front.

The one lingering question is whom the Bentleys were thinking of when they put up the one-grouch/ two-grouches signs. They always maintained it was just a slogan, and didn’t target anyone. Asked again, Ronnie Bentley chuckled.

“People have always asked that question, but we never did tell who the grouch was,” he said.