A question as time gets ready to change: Why? 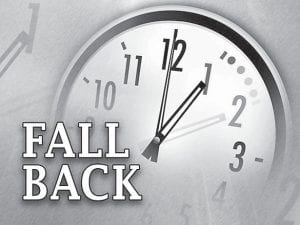 This Sunday at 2 a.m. (November 4) we switch back to Eastern Standard Time, leaving Daylight Saving Time a thing of the past. (Notice, contrary to public belief, there is no “s” on the end of Saving.)

If your house is like my house, then it will probably take you about an hour to adjust your clocks. Think of all the objects in your house that have clocks and you know what I’m talking about. Chances are if you are like me, about two weeks from now you’ll find some clock that escaped the time changing episode. This time changing has become a little easier over the years as many of our devices in this computer age will actually switch themselves.

But what is all this time change about? Well for all of you who have wanted to know, but were afraid to ask, here we go:

Man first kept time by celestial occurrences. The sunrise and sunset, phases of the moon, summer and winter solstices, and the apparent movement of the stars, were all used as time keeping devices. Unfortunately, as man divided the days into hours, minutes, and seconds, he had to change his standards and redesign the clocks, since these units of time had no Astronomical origin.

It was the scientists, astronomers, navigators, and surveyors who demanded better ways to keep “precise” time. The Mason-Dixon Line for example, is not the “cultural” division between the North and South as most people believe, but rather an astronomical and time related boundary set up by two surveyors, C. Mason and J. Dixon, between 1763 and 1767. It was, and still is, set up as the boundary between Pennsylvania and Maryland.

But believe it or not, it was not the scientists who set up the time boundaries. It was the railroads, more precisely the Pennsylvania Railroad in 1870. They asked the Allegheny Observatory in Pittsburgh for a systematic plan to govern time keeping along their lines. When conductors checked their famous Hamilton pocket watches with the Allegheny, they were keeping strictly with the schedule so as to avoid disastrous collisions with other trains on the same route.

In November 1883, the railroads established a national standard time consisting of four time zones: Eastern, Central, Mountain, and Pacific. However, the zones weren’t adopted by Congress until 1918. Daylight Saving Time came into existence during the same year, and during World War II this “war time” was used to reduce the peak consumption of electricity. In 1966, Congress put the Department of Transportation in charge and standard time became mandatory, to a point where we now have specific rules for changing time zones and the change to and from Daylight Saving Time. The rules are so precise, that at 2 a.m. Sunday, some Amtrak trains will hold up an hour, so as not to be early to their next stations.

However, even though this change is mandatory, many states and cities refuse to change to Daylight Saving Time. The change to DST quite frankly really serves no purpose, as the daylight is longer in spring and summer anyway. So why bother to change? Although originally designed to save energy during WW II, recent studies have indicated there is no savings in energy consumption and in many cases more energy is actually used during DST. It also creates problems with scientific equipment, has caused some business to actually lose business, and has been proven to negatively affect health.

At present, the U.S. Naval Observatory, and the National Bureau of Standards keeps us on time. The “second” as defined by those two organizations, is the interval at which the Cesium Atom oscillates: 9,192,631,770 times. It is the splitting of this atom that generates the beeping on Radio Shack Time Cubes, which are found in most Planetariums and Astronomers homes. This beeping helps us set our watches for precise timings of eclipses and other astronomical events.

We in astronomy have things a lot easier, as we always use the time in Greenwich England, for our calculations and timings. This “universal time” doesn’t have to worry about the time changes or even the time zones. All astronomers and many meteorologists have the same time, whether we are in Los Angeles, in Prestonsburg, Ky., Schenectady, N.Y., or in Australia.

For example, if it is now 10 a.m. in eastern Kentucky, then it is nine in Nashville, eight in Salt Lake City, and seven in San Francisco. However, on all astronomers’ watches, it is 1500 hours, regardless of where they are. See, it’s much easier.

When you wake up Sunday, double check all of your timepieces to see if you are with the rest of us. And just remember, Edward L. Norton once said, “Time and tide wait for no man.”

Steven Russo is the director of East Kentucky Science Center & Planetarium located on the campus of Big Sandy Community and Technical College in Prestonsburg.