A ray of hope for open government

This year’s Sunshine Week (March 16-22) brings new rays of hope for the public’s right to know. The first reform to strengthen the Freedom of Information Act (FOIA) in more than a decade is newly on the books, and increasing government transparency is becoming a greater part of public debate and discussion.

The OPEN Government Act will help restore accountability in processing Americans’ FOIA requests, and it will help pull back the veil of secrecy that many feel has burdened our democracy for too long. This law will also protect the public’s right to know by ensuring that anyone who seeks information under FOIA, including freelance journalists and bloggers, can seek FOIA fee waivers.

But there are still challenges ahead. We were disappointed last month when the White House buried a provision in the Administration’s FY 2009 budget proposal that would move the functions of the new Office of Government Information Services (OGIS), which was created under the OPEN Government Act, from the independent National Archives and Records Administration to the Department of Justice. The President’s proposal is not only contrary to the express intent of the Congress, but it runs counter to the new law’s purpose – to ensure the timely and fair resolution of Americans’ FOIA requests. 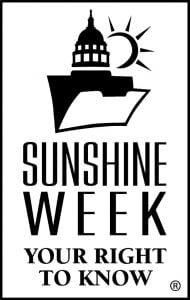 The Office of Government Information Services was established to mediate FOIA disputes between federal agencies and FOIA requestors, review and evaluate agency FOIA compliance, and house the newly established FOIA ombudsman, among other things. When we drafted the OPEN Government Act, we intentionally anchored this vital office in the National Archives, so that OGIS would be free from the influence of the federal agency that litigates FOIA disputes – the Department of Justice. We also wanted OGIS to be set within the apolitical National Archives to nurture the new office’s independence, so that all Americans can be confident that their FOIA requests will be addressed openly and fairly.

Given the clear intent of Congress to establish OGIS as an independent office in the National Archives, the president’s budget proposal should not – and cannot – go unchallenged. In addition, given the Justice Department’s own record on FOIA compliance – a recent BNA article found that the Justice Department’s Office of Information Policy is burdened by increasing FOIA backlogs – it is difficult to justify entrusting the department with overseeing the processing of American’s FOIA requests.

When the Congress unanimously passed the OPEN Government Act just a few months ago, Democrats and Republicans alike joined together in promising the American people a more open and transparent government. We intend to work to ensure that that this was not an empty promise, but one that will be honored and fulfilled with a fully funded and operational Office of Government Information Services in the National Archives.

We also intend to build upon the important FOIA reform work that we began last year. Just in time for this year’s Sunshine Week, we have introduced new legislation to shed more light on the growing use of legislative exemptions to FOIA. The OPEN FOIA Act will require that when Congress provides for a statutory exemption to FOIA in new legislation, Congress must state its intention to do so explicitly and clearly in the bill. While we do not question the need to keep certain government information secret to ensure the public good, the excessive use of legislative exemptions to FOIA to withhold information from the public can harm our democracy. Our bill will ensure openness and clarity about how we treat one of our most important open government laws, by allowing more sunshine into the process of creating legislative exemptions to FOIA.

More that two centuries ago, Patrick Henry proclaimed that “[t]he liberties of a people never were, nor ever will be, secure, when the transactions of their rulers may be concealed from them.” These words remain as true today as they were 200 years ago. For more than four decades, FOIA has been perhaps the most important federal law to ensure the public’s right to know and to balance the government’s power with the need for government accountability.

As the recent legislative success with the OPEN Government Act shows us, open government is not a Democratic issue or a Republican issue. It is an American value and a virtue that all Americans can embrace. Sunshine Week gives us the chance to celebrate our successes, and evaluate the challenges that lie ahead as we work to further strengthen laws to protect the public’s right to know. To hold our government truly accountable, we must shine light on the decisions being made in the name of the American people. With the first major reforms to FOIA in more than a decade now under its belt, Congress must do everything within its power to continue to make sure that one of our most important open government laws is fully and faithfully enforced, so that we can let the sun shine on the most important actions of our government.

Sen. Patrick Leahy (D-Vt.) was installed in the Freedom of Information Act Hall of Fame in 1996. He is the author of the Electronic FOIA Amendments of 1996 and co-author of the OPEN Government Act, a comprehensive bill to improve FOIA’s implementation. Sen. John Cornyn (R-Texas) is the other coauthor of the OPEN Government Act, and has long been a champion of open government. He has co-authored several open government bills in the Senate and supported numerous transparency measures. As Texas Attorney General, he also took ground-breaking measures to increase transparency.