A real story of first love

By EVERETT B. VANOVER

VISIT — The granddaughters of Willie Franklin and Ada Dixon Lewis visiting their aunt, Evaleen Lewis Towery, in Austin, Tex., recently. They toured the Lyndon B. Johnson Library on the University of Texas campus while in Austin. On display at the library is a Kentucky long rifle made by their uncle, the late Arthur Dixon, and presented to President Johnson in the 1960s. Cousins attending the gathering were Debbie Mullins Jung, Troy, Ohio; Beth Mullins Allgirer, Guilford, Ind.; Leigh Lewis Stewart and her mother Jean Lewis, Bristol, Va.; Mahala Reynolds Frazier, Whitesburg, and her daughter Rebecca Craft Webster, London; Patsy Towery Weinberg and her daughter Cassie, Plano, Tex.; Nancy Towery Hanson, her husband Rick, and their daughter Emily and grandson Jacob, Austin. Pictured above are Mahala Reynolds Frazier and daughter Rebecca Craft Webster at the LBJ Library in Austin. Below is the long rifle made by the late Judge Arthur Dixon of Whitesburg.

Sixty-five years ago I was training to be a radio operator in the old Army Air Corps at the age of 16. The military gave me a few days off to visit in Jenkins. I was so homesick from being away from home for the first time.

My last day at home I took the Greyhound Bus to Whitesburg so I could thumb a ride back to my base. A very pretty 15-yearold girl asked me to sit beside her. She told me I looked so handsome in my uniform.

I was so shy then that she did most of the talking and asked if she could write me. She wrote me for the rest of the time I was in the service.

I was discharged December 1947 after two years of duty. I had a date with her the first night I was home.

Her mother met me at the door, and I was so nervous, but her mother made me somewhat at ease with a big hug. This was my first date with the girl. When we left her house her mother said that we were the best looking couple in Jenkins. I got my first kiss that night. We were together every chance we got. We were so much in love. 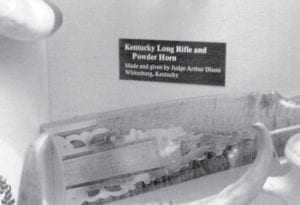 After a few months my money ran out, and the work I had been looking for I never found. I knew that I had to go back into the military and learn a trade. She was dead set on me leaving her. We said a few things to each other that we both hated.

I started going out with someone else, and she did the same. I got married and went back into the military and learned a trade, and stayed for 25 more years.

She got married at 16 and raised a family. She lost her husband, but never remarried. We both thought of each other often during the years. I looked for her every time I came home on leave, to see if she was well and having a good life, but never found out anything about her.

My wife passed away a couple of years ago, and I started thinking more about my first love and told my daughter about her. She started looking for her on the computer, and after a few months, she found her.

My penpal and first love is now in ill health, but we write to each other, talk on the phone, and exchange photos.

I hope to go back to Letcher County and visit her when it warms up. Wish me luck.

eld, Calif., retired from the
U.S. Air Force after 27 years
in which he served five overseas