A reminder of what country was 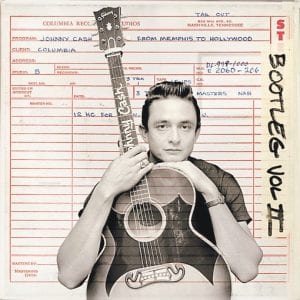 Who is that man with the deep, twangy voice pitching the products of Home Equipment Co.? He beseeches you: Buy aluminum screens, wire fences, awnings, fiberglass insulation. “You know, folks,” he says, “even without air conditioning you can make your home several degrees cooler this summer and for the summers to come with Home Equipment Co.’s Cool-Glo Awnings.”

So sayeth Johnny Cash. And not just any Johnny Cash — the 23-year-old Cash of May 21, 1955, coming to you from the mists of country-music history on KWEMAM 990, back when his backing band, the Tennessee Three, was the Tennessee Two.

“ From Memphis to Hollywood,” Columbia/Legacy’s latest Cash “bootlegs” is drawn, like its predecessor, from material in the House of Cash estate. A chronicle of his first 15 years at Sun and Columbia records, its trove of Cash arcana, Bsides and unreleased demos takes you from the very earliest captured moments of the Man in Black’s career from 1955 all the way into his high country stardom of the late 1960s.

Good music all, but it is the front-end tracks from the dawn of the Cash career that captivate the ear over and over again. You find yourself marveling that the elder statesman of the reflective “American” series in the final years of his life was once this young man, with his rebellious streak poking through and his peak years ahead of him.

Here is a performer still tentative enough to stumble and stutter on the radio when he’s reading the ads for his sponsor on “The Johnny Cash Show” on KWEM-AM. And here is a boyish icon-to-be who sounds so earnest and eager when he asks for listeners’ input: “Write us a card and letter and we’ll try our best to get the song on that you wanna hear. If we don’t know it, we’ll learn it.”

The music itself is fascinating. Cash makes sure, on the show, to do at least one “sacred song” — “Belshazzar” — to play to the religious constituency. And the demos delivered up later — including a deliberate, sedate version of “I Walk the Line” and a charmingly quiet “Get Rhythm” — show a genius just starting to find its groove.

In entertainment, the “from the vaults” conceit is often an overrated notion — a marketing ploy. Not here. Listen to this CD and hear the hinge point between rural parlor music and outlaw country. Johnny Cash was one of the unforgettables, and this is a glimpse directly into both his young soul and the context from which he came — a reminder of what American country was, and how its stars built their careers rung by rung.