A roadmap to The Chase 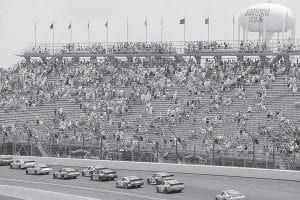 NEXT STOP INDY — The Brickyard 400 at the famous Indianapolis Motor Speedway is next up on NASCAR’s Sprint Cup racing schedule. Like other stockcar racing venues, Indy is fighting the plague of empty seats. (AP photo)

This weekend is the last open date on the Sprint Cup schedule before the season concludes with 17 consecutive weekends of racing. Looking at the remaining schedule, it is easy to see that the next seven races will set the table on which drivers will get the opportunity to run for the title with the start of the final stretch of 10 races.

Before you can ever start handicapping the Chase, you have to figure out which 12 drivers will make the field and this just may be the toughest year yet to predict who will be on the list of elite drivers running for the championship. Making any kind of predictions even tougher are the seven tracks that will host the races leading up to the Chase.

The only type of track that will not play host to a race during this seven-race stretch is a restrictor plate track. There is only one more restrictor plate race on the schedule for this season and that is at Talladega during the Chase. Other than a plate track, the races leading up to the Chase will provide a cross-section of those making up the entire schedule that shouldn’t favor any one driver.

When the series resumes after its last break, it will be the annual trip to Indianapolis Motor Speedway for the running of the Brickyard 400. A win at this fabled venue has every driver up on the wheel but its unique layout makes it one of the toughest setups on the schedule. It’s a huge 2.5-mile track but unlike the ovals that make up much of the schedule, this oval is considered a quad-oval that actually has a short straightaway between the turns besides the long front and backstretches. It also doesn’t help that it’s a very flat track with only nine degrees of banking in those four corners.

The following week you have the only triangle-shaped track on the schedule when the series stops at Pocono for the second race there this season. Three turns may seem easier to navigate than four like most tracks, but all three of these turns have a different amount of banking, making it extremely difficult for a crew chief to hit on the setup.

The trend continues at the next stop as it will be the second road course race of the season and the first at Watkins Glen. Let’s face it, the competitive level of the entire field is getting so much better on this type of track, but there are still some drivers that prefer to only turn left on race day.

Finally the schedule gives the Chase hopefuls a break by going to what would have to be considered a traditional track. Michigan is one of the widest tracks on the schedule which produces very few caution flags, but the downside to that is oftentimes a stop at Michigan can turn into a fuel mileage race. This is one of the remaining tracks where the best car doesn’t always win, just the one with the best fuel strategy.

If a driver is still in the hunt after these four races, Bristol with its reconfigured track awaits and this could turn into the “wild card” race of the next seven. No one really knows what to expect, but don’t look for it to return to the Bristol of old with all of the torn-up sheet metal. But, there should no longer be the long stretches of green flag racing that have dominated the racing at this track in recent years.

That only leaves two races and you know that you can’t go through a seven-race stretch without stopping at a one and a half-mile cookie-cutter type track. Atlanta will host its only race of the season during the Labor Day weekend under the lights. It’s one of the fastest tracks on the schedule and if you miss the setup here, you can be a lap down before the first round of pit stops.

That takes up to the last race at Richmond. It’s a short track but the racing is always more like speedway racing. It doesn’t really matter what type of track Richmond is, the amount of pressure on the drivers still in the hunt for one of the 12 Chase spots is enough to make for a great night under the lights.

So there you have it, the roadmap to the Chase. It really doesn’t favor any driver or team but it will demand the best from each if a Chase spot is going to be in their future.