Summit High School (Tenn.) coach Brian Coleman wasn’t sure if twins Keaten and Destin Wade would end up playing together in college, but he never doubted his two players would like to do that.

Now they are going to play together at Kentucky after picking the Cats over Tennessee, Virginia and Louisville.

“There was a time Keaten was outgrowing Destin. He had a few better offers. He got LSU and Oklahoma and I thought maybe they would not go to college together,” said Coleman. “Then Destin started getting SEC offers. I think when that happened they knew they would play together in college.”

Kentucky certainly wanted them together. Keaten is a 6-4, 225-pound outside linebacker who is considered one of the nation’s top 200 players by 247Sports. Destin is a 6-3, 205-pound athlete who is a consensus top 500 player nationally who believes he can continue to play quarterback in college — an option Kentucky was willing to give him. Both are four-star recruits. 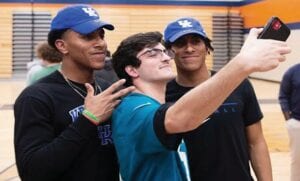 Summit (Tenn.) High coach Brian Coleman always thought twins Keaten and Destin Wade, seen here posing for a “selfie” photo with a fan, would like to play college football together and now they will at the University of Kentucky, which the twins chose over Tennessee and others. (Twitter Photo)

Getting the two commitments from two of Tennessee’s best players indicate the shift of power in football between UK and Tennessee.

“No question Kentucky is the better program at the moment and taking a duo from the Volunteer State that Tennessee invested lots of time in is the latest evidence,” CatsIllustrated publisher Justin Rowland said.

Destin Wade wants to play quarterback and likely will be UK’s only quarterback signee in the 2022 recruiting class since the Cats currently have scholarship quarterbacks on campus now.

“Destin wants to give quarterback a shot. That’s all he is asking for,” Coleman said. “If it does not work out, he can play other spots. A lot of good safeties and linebackers in college started out as quarterbacks. He just wants that shot to give it a try and was always leaning to schools who were willing to give him that opportunity.”

Coleman is a run-first coach who likes the Wing-T offense and as a sophomore Destin Wade mainly was a running quarterback. As junior when Summit won the state championship, Destin ran for 18 touchdowns and threw for 19 while amassing almost 3,000 yards of offense.

‘He changed my philosophy about offense and it made me better and the team better,” Coleman said. “We morphed our offense because of him. The more he protected the ball, the more we threw it. We just kept throwing it and he kept getting better. In the playoffs he really shined and showed a lot of colleges he can play quarterback and read defenses and not just make one read and take off running.”

Keaten had a breakout sophomore season when Summit Hill lost in the state championship game. However, he broke his foot before his junior season started.

“We never knew when he did it. It bothered him a little bit and he got an X-ray and he had a fracture,” Coleman said. “He had surgery, got it fixed, tried it and the foot still hurt. I knew it was not healed, so I shut him down because I knew his future was so bright.”

When Summit reached the state semifinals, he was cleared to play and played defensive end/outside linebacker in the semifinal and title games. He had six tackles, four tackles for losses and three sacks. He also had a touchdown reception.

“He is so long and athletic. He can drop into pass coverage or be an end rusher,” Coleman said.

The coach expects Keaten to play running back while Destin could also play some in the secondary like he did in the playoffs at key times last season.

Coleman says both can run the 40-yard dash in the 4.4-second range even if it might not look like they are that fast.

“They are both long and have such long strides,” Coleman said. “Keaten is a lot like (Tennessee Titans running back Derrick Henry). He can outrun guys but he may let them catch up and just stiff arm them. Destin is fast and explosive.”

Off the field, the twins are typical students that peers and teachers all like.

“They are just great kids. They like being around friends,” the coach said. “They will stick their head in my office just to see how I am doing. They are very nonchalant. But on the field they have that switch to turn on when it is time to play and get serious. And right now they are killing it in the weight room just getting ready for next season and then Kentucky.” s

Kentucky fans are already looking forward to having West Virginia transfer Oscar Tshiebwe on the court next season to provide inside scoring and rebounding UK sometimes lacked during the recent 9-16 season.

However, off the court fans are going to see a happy player almost all the time.

So how does he balance being a ferocious player on the court but a happy person all the time off the court?

“When you’re outside, yeah, you enjoy spending time with people. Laughing is the gift God gave me. But when you get on the court, it’s time for business. It’s time to take care of (business). That’s my job,” Tshiebwe said.

“Like, when I’m out there, there’s no time to joke around. It’s time to get business done, and we’ve got to win. It’s all about winning.”

Kentucky fans should like that. No talk about the NBA, just about winning.

“From what I understand in this game of basketball, you have to give everything you have to win the game. It doesn’t matter how hard a game it was; it’s how you finish,” Tshiebwe said.

“It’s about winning. When I’m out there, my mind is really concentrated and focused. I try to help win the game.” s

Incoming linebackers Trevin Wallace and Martez Thrower have garnered a lot of attention and will arrive on the UK campus in June with big expectations. However, linebacker coach Jon Sumrall says not to sleep on Luke Fulton, a transfer from Michigan State.

“He is a big, physical, very impressive kid when you see him in person,” Sumrall said. “He has got strength, got size. He just likes to play the game.

“He is an intelligent kid and has some experience in the college football environment. Because he is a smart, tough kid, I think it will really be fun to watch his development.

“I think he can do a lot of productive things in this program and has a really good upside for us. He’s somebody we are definitely glad to have in the program.”

He could be needed even more now after sophomore linebacker D’Eryk Jackson, a player many expected to step in the starting role vacated by likely NFL first-round draft pick Jamin Davis, suffered a season-ending injury in spring practice.

Transferring what a player learns in a classroom setting to production on the field is important for Fulton and every other player Sumrall, a former UK linebacker, coaches.

“It’s different on defense than offense because it is a reactionary game for us. We like to try and dictate things to the offense on our terms but guys have to understand you have to go do it. It takes time, takes reps. You can know the answer about what to do in the classroom but doing it on the field is a totally separate thing.” s

Patrick Patterson did not play with Rajon Rondo at Kentucky but he certainly is glad to be playing with him now on the Los Angeles Clippers.

The Clippers added Rondo to their roster in late March and the former Wildcat has a fan in Patterson.

“He’s a veteran,” Patterson said about Rondo. “He’s won championships, he’s been on championship caliber teams. He knows the ins and outs of basketball, he has such a high basketball IQ.

“He’s that guy that we go to whenever we need to come together. He sees the floor like no one else. So just having him out there, he’s that big missing piece, a big part of the success that we want, the success that we need. He brings everything you want to a team, and it’s good to have him out here.”

One of Patterson’s former UK teammates, DeMarcus Cousins, has also recently joined the Clippers. Patterson and Cousins were two of five Cats drafted in the first round in 2010 after John Calipari’s first season at UK.

“That’s my big little brother. It’s like college days all over again. Extremely happy to have him here. Very fortunate, very blessed to call him my teammate again,” Patterson said.

Actually, maybe Rondo and Cousins should be happy to have Patterson as a teammate.

Patterson has adjusted to his role in a way not every NBA player can.

“It’s stressful at times because sometimes I don’t get told I’m playing or starting until 10 minutes before the game,” Patterson said. “But it’s my role. It’s who I am.”

John Wall was the No. 1 pick in the 2010 draft after playing one year at UK. Teammates Cousins (5th) and Eric Bledsoe (18th) were also picked while Patterson was picked 14th. Another Wildcat, Daniel Orton, went 29th in the first round but only managed to play in 51 games before his NBA time ended.

The other four Wildcats are still playing in the NBA but guess which one has played in the most games? That would be Patterson.

Wall has played in 610 games and Cousins 594. Bledsoe comes in with 686 games. All those are impressive numbers.

However, the combined numbers the four have put together since losing to West Virginia in the 2010 Elite Eight to end their collegiate careers are mind-boggling. They have scored over 38,000 points and pulled off almost 14,000 rebounds. The foursome have also handed out over 10,400 assists.

Remember coach John Calipari did say that 2010 draft night was the “biggest day in the history of Kentucky’s program” after five Cats went in the first round. It was a statement UK fans and former players did not like, and still don’t, but four of those five players certainly have had productive NBA careers. s

All-American Madison Lilley was an easy choice for SEC player of the year in voting by the league’s volleyball coaches this year. She led UK to its fourth straight league championship in her four years at UK and a No. 2 seed overall in the NCAA Tournament.

But has Lilley been so good that she’s been taken for granted at times?

“With a player like that you have to be creative in how you challenge them to get incrementally better each year,” UK coach Craig Skinner said. “We have tried to do that and challenge her a lot of different ways.”

Lilley has become such a dominant setter that Skinner says her true worth probably will not be appreciated until she’s no longer playing for UK.

“With a player like Madison, you realize how good she is when she is gone,” Skinner said. “When she is with you, it’s just the status quo and how you do it.

“It’s like a point guard who never turns the ball over and gets assists and makes the right decisions. You don’t realize it (how good she is) until she is gone. That is the thing that will stick out when Madison has graduated.”