A SLIP OF THE FOOT 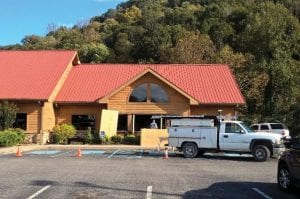 – Workers prepared to close a hole in the wall of Pine Mountain Grill after a car rammed into the side of the building on Monday. Police said an elderly man was attempting to park in a handicapped spot when he hit the gas pedal instead of the brake and jumped the curb. Neither the man nor his wife, who was a passenger in the car, was injured. No one was sitting in front of the window when the crash occurred.